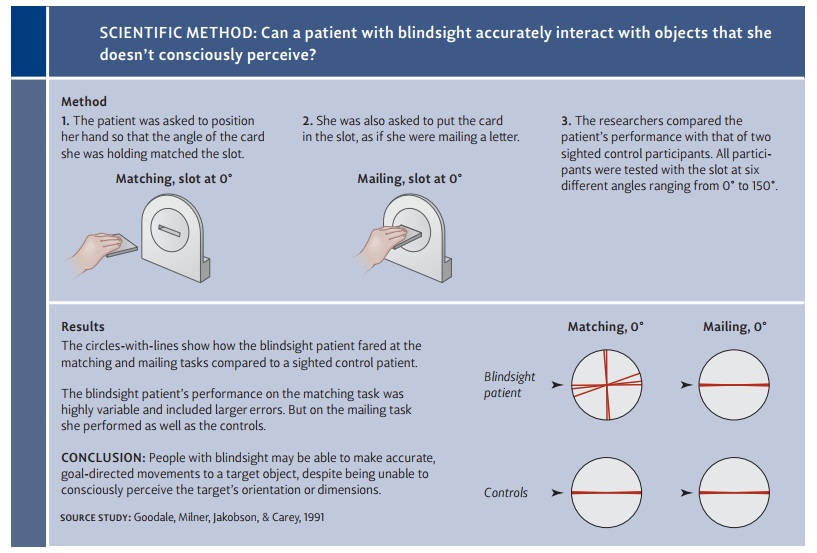 The existence of the cognitive unconscious sets limits on what we can learn from intro-spection: There’s no point in asking people to introspect about, say, how their percep-tual processes operate or how memory retrieval proceeds.

Some of the evidence relevant to these questions comes from people who have suffered brain damage. We’ll consider people who suffer from anterograde amnesia—a profound disruption of their memories—usually caused bydamage in and around the hippocampus. As we’ll see, these individuals appear almost normal on tests of implicit memory—memory that is separate from conscious awareness. In one study, the patients were first presented with a list of words. Just a few minutes later, they were asked in one condition to recall these words and were given helpful hints: Was there a word on the earlier list that began with CL A__? Even with this cue, the patients failed to remember that the word clasp was on the earlier list—a result that confirms the diagnosis of amnesia. In another condition, though, the patients were tested differently. After being presented with the initial list, they were asked simply to come up with words in response to cues like this: “Can you think of any word that begins with CL A__?” We know that other patients who haven’t recently seen the word clasp are likely to respond to this cue with words more frequently used in conversation (class, clash, clap, clam). However, the patients who had recently seen clasp did offer this word in response to the CL A__ cue.

Notice, then, that these patients have no conscious recollection of the previous list—and so they fail to recall the list, after just a few minutes, even with helpful hints. At the same time, the patients do somehow remember the list; we know this because they’re likely to produce the list words when asked to complete these word stems. These patients, in other words, show a pattern often referred to as “memory without awareness”: They’re influenced by a memory that they don’t know they have. Clearly, therefore, some aspects of remembering—and some influences of experience—can go smoothly forward even in the absence of a conscious memory.

Similar conclusions are suggested by studies of a remarkable syndrome known as blindsight, which is produced by injuries in the visual cortex. Patients with this sortof brain damage are, for all practical purposes, blind. If asked to move around a room, they bump into objects; they do not react to flashes of bright light; and so on. In one experiment, however, these patients were asked to hold a card so that its orientation matched a “slot” directly in front of them. The patients failed in this task, confirming their apparent blindness. But then the patients were told to put the card into the slot, as if mailing a letter—and they did this perfectly (Figure 6.3; Rees, Kreiman, & Koch, 2002; Weiskrantz, 1986, 1997). Thus it seems that these patients can, in a sense, “see,” but they’re not aware of seeing—again a powerful indicator of how aspects of 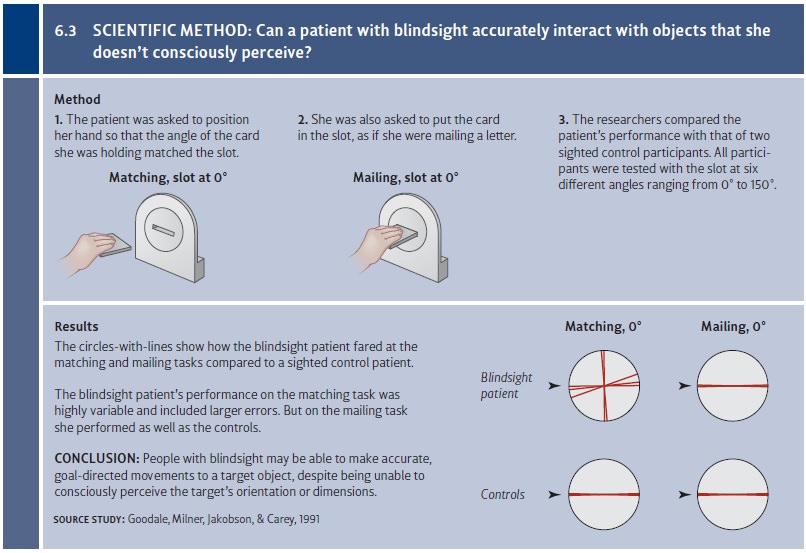 our mental lives can go forward without conscious experience. (For a related case, see Goodale & Milner, 2004.)