The rhythm of sleep and wake, as just noted, is controlled largely by circuits in the hypothalamus and mediated by the hormone melatonin, produced within the pineal gland.

The rhythm of sleep and wake, as just noted, is controlled largely by circuits in the hypothalamus and mediated by the hormone melatonin, produced within the pineal gland (e.g., Zhdanova & Wurtman, 1997). These circuits are in turn controlled by various external influences, including input from the optic nerve that tells the system whether it’s day or night (Gooley & Saper, 2005) and also the timing of meals, a further source of regimentation in the body’s internal rhythms.

Variations in arousal level are also regulated (indirectly) by the cerebral cortex. This effect is evident in the fact that we often arouse ourselves in response to relatively complex stimuli, such as the sound of our own name or thoughts about a difficult emotional problem. The neurons needed to recognize these stimuli are located in the cortex; but when a significant stimulus is detected, these brain areas send signals to the reticular activating system, promoting arousal throughout the brain.

Whatever the source, we can track the brain’s arousal by means of an electroencephalogram, or EEG—a recording of voltage changes occurring at the surface of the scalp. These voltage changes reflect electrical activity in the cortex just beneath the scalp. Figure 6.12 shows an EEG record from a participant who was awake and in a relaxed state with eyes closed; the record shows an alpha rhythm—a regular waxing and waning of electrical potential at a rhythm of roughly 8 to 13 cycles per second (Hz). This rhythm is characteristic of the awake-but-resting state and is found in most mammals.

The brain activity changes when someone attends to some stimulus with his eyes open, or when his eyes are closed but he’s thinking actively (e.g., doing mental arithmetic). Now the person is likely to show a beta rhythm—the voltage is lower and the frequency is higher (14 to 35 Hz); in this state, the pattern of ups and downs in the EEG is difficult to discern.

What about someone who’s falling asleep? When you first become drowsy and go to bed, your EEG pattern tends to develop a clear alpha rhythm. You’re now likely to fall into a light, dozing sleep from which you can easily awaken if there’s some outside noise. You’re also likely at this point to experience vivid but fleeting imagery—so-called hypnagogicimagery. All of these traits mark what’s called the “gateway” to sleep—sleep’s stage 1.

After a few minutes in stage 1, your sleep deepens. Over the next hour, you pass through stage 2, which is marked by several distinctive patterns in the brain activity: peri-ods of 1- to 2-second bursts of rapid brain-wave activity, bursts called sleep spindles, and very high-amplitude waves known as k complexes (Cash et al., 2009). Sleep gets deeper still as you move into stage 3, which is marked by the emergence of slow, large waves in your EEG in a delta rhythm—four waves per second (or fewer). Eventually, the delta waves come to dominate the EEG pattern; now you’re said to be in stage 4 sleep—and because stages 3 and 4 are both characterized by delta waves, they’re often referred to as slow-wave sleep. Indeed, stages 3 and 4 are so similar to each other that, in recent years,many sleep researchers have argued that they should be collapsed into one unified stage.

Across all four sleep stages, your heart rate and breathing slow down. Your eyes drift slowly and in an uncoordinated way. By the time you reach stage 4, you’re virtually immobile, often curled into a fetal position, and hard to wake up. Indeed, trying to wake someone up from slow-wave sleep takes sustained effort; the person protests, seems disoriented, mumbles incoherently, or thrashes around even if shaken or shouted at. Some people enter this confused half-sleep, half-aware state spontaneously, and this accounts for such sleep disturbances as sleepwalking (Hauri, 1977).

Depending on his or her age, a sleeper typically spends about 20 to 30 minutes in slow-wave sleep. After that, the nature of sleep changes dramatically as the person enters REM sleep. His heart rate and respiration rate quicken, almost as if he were awake and exercising. His EEG returns to the high-frequency activity associated with wakefulness (Jouvet, 1967). His eyes start to move in a distinctive way—periodic bursts of jittering back and forth under closed eyelids. These are the rapid eye movements (REM) that give this sleep state its name.

According to nearly all physiological signs, a person in REM sleep seems like he should be awake and alert; an EEG shows an active brain. But even so, the person is sound asleep; in fact, this is the sleep stage in which the person is least sensitive to external stimulation (Williams, Tepas, & Morlock, 1962). Also during this sleep stage, the person’s skeletal muscles show a sudden paralysis. In fact, if someone happens to wake up during a REM period, he’s susceptible to a frightening but harmless stage known as sleep paralysis (Hauri, 1977), in which the muscular paralysis of REM sleep persists for a few moments past awakening, leaving the person conscious but temporar-ily unable to move.

Notice, then, that REM sleep is characterized by a series of contrasts: The brain is active, but the body is immobile. The cortex is energized, but the skeletal muscles are completely inactive. Because of these contrasts, REM sleep is sometimes also called paradoxical sleep.

The first REM period of a night’s sleep is the shortest; and once it’s complete, people move back through lighter stages of sleep toward deeper stages (Figure 6.13). After 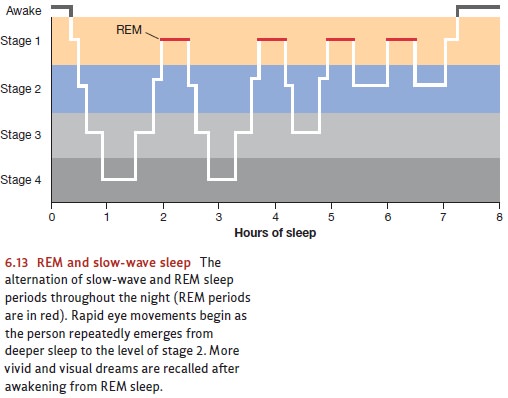 another 90 to 100 minutes, a second REM period ensues, and this pattern of alternating REM and non-REM sleep periods continues throughout the night. An average night includes 4 to 5 REM periods, gradually increasing in length, and the final REM period of the night lasts up to 45 minutes (Hobson, 1995).