When we’re in slow-wave sleep, we seem to be in a state of diminished awareness.

When we’re in slow-wave sleep, we seem to be in a state of diminished awareness. We’re certainly not oblivious to the world around us, and stimuli such as loud noises, a firm shaking, or a bright light in our eyes will awaken us. Less intense but meaningful stimuli can also wake us up; the classic example is a mother awakening when she hears her baby cry. Even if we don’t wake up, we remain sensitive to some aspects of our environment. Notice, for example, that even though we roll around while sleeping, we manage not to roll out of bed—and so apparently we’re somehow sensitive to how close we are to the mattress edges!

There is, however, a part of the sleep state in which we seem acutely aware—but we are aware of events on an internal stage, rather than events from the outside world. We’re referring, of course, to dreams. Dreaming is strongly associated with REM sleep, and when people are awakened from this stage of sleep, at least 80% (and in some studies more) report that they were just dreaming (e.g., Dement, 1978; Foulkes, 1985). This is true even of participants who claim they have “never dreamed.” Apparently these people do dream, even if they typically don’t recall their dreams when they wake up.

Plainly, dreaming is strongly associated with REM sleep, but it also seems to occur in other sleep stages. If people are awakened from slow-wave sleep, about half of them report that they had just been dreaming. In talking about these dreams, people use different terms than they do when reporting the dreams associated with REM sleep. The REM sleep reports tend to be pictorial, depicting episodes that include the dreamer as a character and that seem more or less real while the dream is under way. In contrast, when awakened from slow-wave sleep, people tend to give only sparse summaries, noting that they were only “thinking about something” or that their dreams were “boring.” They rarely relate the kind of colorful, event-filled drama we usually think of as a dream (Armitage, Hoffmann, & Moffitt, 1992; Cartwright, 1977; Foulkes, 1985).

Does this mean that we actually dream differently in REM sleep than in slow-wave sleep? It’s hard to decide, because participants awakened from slow-wave sleep tend to be sluggish and disoriented while those awakened from REM sleep are quickly alert. So it’s at least possible that the different kinds of dream reports are reflecting the different states of the just-awakened sleepers rather than the nature of the dreaming itself.

Focusing just on REM dreams, though, what do people dream about (Figure 6.18)? Our evidence comes from the dream reports of just-awakened dreamers. The contents of these reports vary enor-mously, but make it clear that events in dreams do not—as some 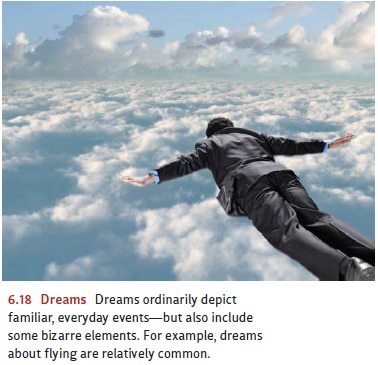 Dream reports also indicate that dreams tend to showcase a range of relatively ordinary current life preoccupations—including the emotional events of life but also the mundane episodes of one’s daily routine (Cartwright, 1994). Dreams likewise tend to include familiar places and objects, people we’ve recently encountered, or activities we have recently engaged in—including, of course, activities that filled the hours just before sleep. In one study, researchers had people spend several hours playing Tetris before going to bed; many of the participants reported dreaming about blocks falling and rotating, just as they do in the game. It’s worth noting, though, that the participants in this study rarely reported dreams about playing the Tetris game itself (Stickgold et al., 2000).

Dreams are not, however, mere replays of daily events. Instead, our dreams often introduce weird or illogical elements. Thus we might dream about being naked in pub-lic places, or about flying—without, of course, the aid of an airplane. Despite these peculiar features, though, the dream content seems perfectly natural while it’s under way; it’s only when we’re awake that the dream seems strange.

In addition, people’s dreams tend to reveal similar themes from year to year, even over decades (Domhoff, 1996). Some people regularly dream about illness, others dream about fighting, and others dream about romance. But some themes show up in nearly everyone’s dreams. For example, for almost everybody, dreams contain bad outcomes more often than good ones, and more negative emotions (fear, worry, embar-rassment) than positive ones. Thus, people dream about failed efforts, missing appointments (or exams), or being attacked or chased. Dreams also seem to include more aggressive interactions than friendly ones. In fact, according to one estimate, 2 out of every 100 dream characters are murdered—a proportion far exceeding real-life homicide rates (Hall & Van de Castle, 1966; Hall et al., 1982).

There are also certain themes that are relatively rare in dreams—and perhaps sur-prisingly so. For example, relatively few of our dreams have detectable sexual content (Domhoff, 2003)—only 10% of the dreams reported by young men and roughly 3% of the dreams reported by women. (But for both males and females, and largely independent of reported dream content, REM sleep is associated with genital arousal—erections in males and vaginal lubrication in females.) However, when we do dream about sexuality, the sex acts are often quite overt—and so the dreamer, the next morning, recalls a dream about wild and passionate intercourse.