The Many Brain Areas Needed for Consciousness 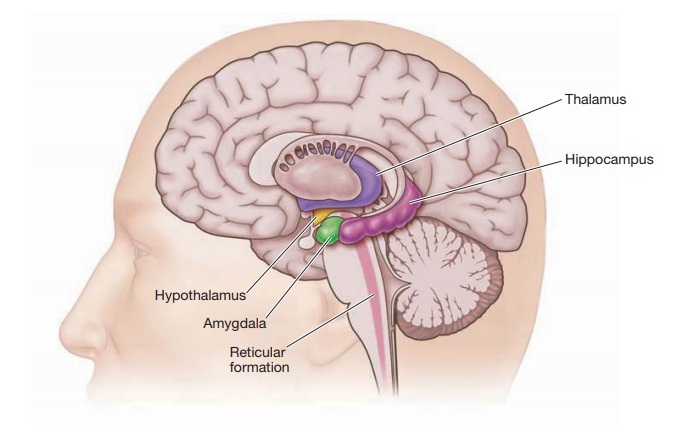 How do we go about exploring the correspondence between mind and brain, between the mental world and the physical one?

The Many Brain Areas Needed for Consciousness

How do we go about exploring the correspondence between mind and brain, between the mental world and the physical one? One way is to examine the brain status of people who have “diminished” states of consciousness—people who are anesthetized or even in comas. In each case, we can ask: What is different in the brains of these individuals that might explain why they’re not conscious?

Research on this topic conveys a simple message: Many different brain areas seem crucial for consciousness, and so we can’t expect to locate some group of neurons or some place in the brain that’s the “consciousness center” and functions as if it’s a light bulb that lights up when we’re conscious and then changes its brightness when our mental state changes.

In fact, research in this arena suggests a distinction between two broad categories of brain sites, corresponding to two aspects of consciousness (Figure 6.6). First, there is 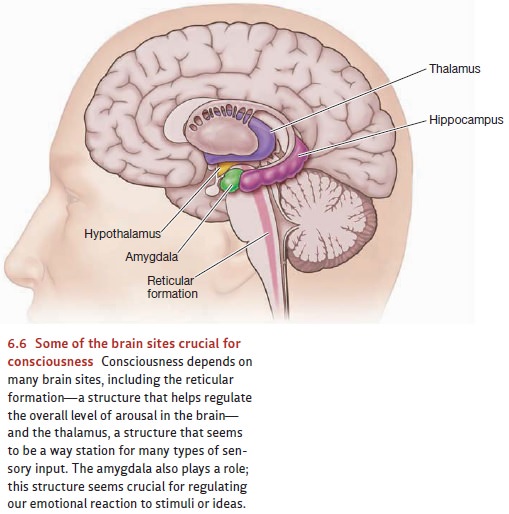 the level of alertness or sensitivity, independent of what the person is alert or sensitive to. We can think of this as the difference between being dimly aware of a stimulus (oran idea, or a memory) and being highly alert and totally focused on that stimulus. This aspect of consciousness is disrupted when someone suffers damage to certain sites in either the thalamus or the reticular activating system in the brain stem—a system that controls the overall arousal level of the forebrain and that also helps control the cycling of sleep and wakefulness (e.g., Koch, 2008).

Second,  our  consciousness  also  varies  in  its  content.  Sometimes  we’re  thinking about  our  immediate  environment;  sometimes  we’re  thinking  about  past  events. Sometimes we’re focused on an immediate task, and sometimes we’re dreaming about the future. These various contents for consciousness require different brain sites, and so cortical structures in the visual system are especially active when we’re consciously aware  of  sights  in  front  of  our  eyes; cortical  structures  in  the  forebrain  are  essential when  we’re  thinking  about  some  stimulus  that  is  no  longer  present  in  our environment, and so on (Figure 6.7). 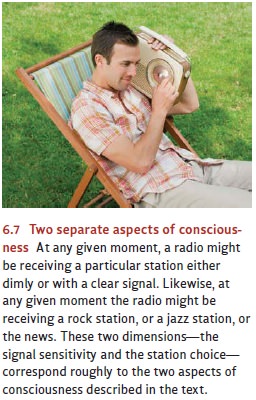 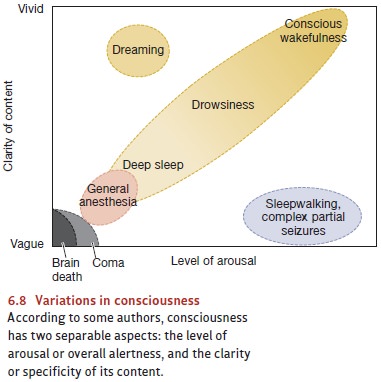 In fact, this broad distinction between the degree of awareness or sensitivity and the content  of  consciousness  may  be  useful  for  us  in  thinking  about  variations  in consciousness, as suggested by Figure 6.8 (after Laureys, 2005; also Koch, 2008). In dreaming, for  example, we  are  conscious  of  a  richly  detailed  scene, with  its  various sights  and  sounds  and  events,  and  so  there’s  a  well-defined  content—but  our sensitivity  to  the  environment  is  low.  By contrast, in the peculiar state associated with sleepwalking, we’re sensitive to certain aspects of  the world—so we can, for example, navigate through a complex environment—but we seem to have no particular thoughts in mind, so the content of our consciousness is not well defined.