MEDITATION AND THE BRAIN

Altered states of consciousness can also be achieved through some religious practices. Of course, religions vary enormously in their tenets and in their rituals, and that variety is crucial here. In some religions, worship encourages a state of extraordinary excitement in which people shake, or fall on the floor, or shout out in “languages” no human understands. In other religions, worship involves a quiet state that encourages feelings of reverential awe. In still other religions, worship involves special circumstances—deep isolation, or periods of fasting, or even pain—to encourage thoughts about a world filled with supernatural forces

Perhaps the most-studied religious state, however, is the one achieved through the religious practice of focused meditation, during which the meditator focuses on a particular chant or perhaps just a syllable. Alternatively, in some traditions, the medita-tor focuses on a visual target such as a candle in the room or a prayer mandala that is either physically present or called up from memory (Figure 6.23). Practices like these are common in many Asian religions including Hinduism, Taoism, and Buddhism. 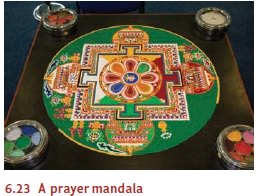 In all of these religions, meditators report feeling profoundly relaxed during the meditation exercise and both unresponsive to most external stimuli and simultaneously highly alert to certain ideas. Indeed, in many traditions, the meditators strive to shut out any distracting thoughts while trying to be fully alert to insights that may arise within the meditation.

Notice, then, that there are several parallels between the meditative states and hypnosis: Both are quiet, relaxed states created by close attention to a specific stimulus. In both states, the person is largely oblivious to many stimuli but highly alert to other ideas—the hypnotist’s suggestions in the one case and, in the other, thoughts leading to mindfulness, tranquility, and (in some traditions) compassion.

MEDITATION AND THE BRAIN

Meditation has many effects on both mind and body. When compared to nonmeditators, people who meditate seem to have lower blood pressure, lower levels of the body’s stress hormones, and enhanced immune response (Barnes, Treiber, & Davis, 2001; Davidson, Pizzagalli, Nitschke, & Kalin, 2003; Infante et al., 2001). Meditation also seems to have a powerful impact on brain activity. One study, for example, used EEGs to assess the brain’s state during meditation; the data showed a strong increase in the alpha rhythms associated with a state of relaxation (Lutz et al., 2008).

In another study, the researchers examined a type of meditation in which the per-son doesn’t focus on any particular target. The researchers also used measurement techniques that would be sensitive to faster rhythms in the brain’s activity, and they studied meditators with a considerable amount of skill—Buddhist practitioners with at least 10,000 hours of training in meditative practice! In the experiment, the researchers collected EEG data from these adept practitioners while they were in a mental state focused on “unconditional loving-kindness and compassion.” For comparison, the study also included a group of control participants who had been given a week to practice meditation. During that week, these control participants were asked at first to think of someone they cared about and to let their mind be filled by a feeling of love or compassion toward this person; later, they were encouraged to let their thoughts be filled with similar feelings toward all sentient beings (Lutz, Greischar, Rawlings, Ricard, & Davidson, 2004). 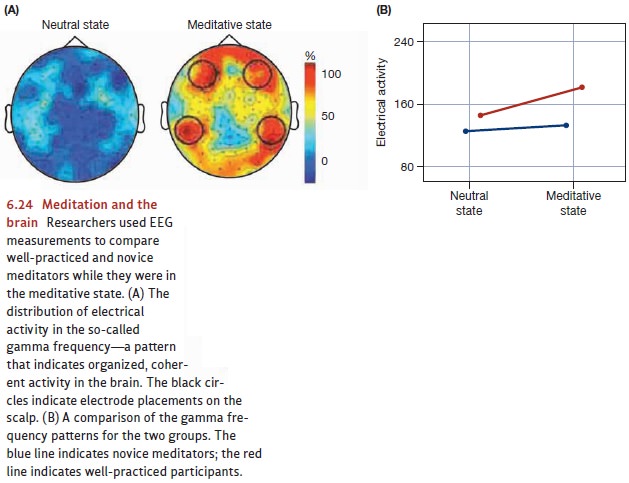 The EEG records collected during meditation showed several differences between the two groups. One finding was that the brains of well-practiced meditators showed a pattern of neural activity in which brain areas that were anatomically distant from each other were nonetheless firing at the same rhythm and in synchrony. The specific rhythm observed, and the synchrony itself, are both thought to be crucial for the processes that coordinate and integrate brain activity in distinct areas (Figure 6.24). The implication, therefore, is that the meditation had created a strongly unified, cohesive experience—an experience, roughly put, of “one-ness.” More broadly, this shift in brain activity associated with this type of meditation is certainly consistent with the idea that the meditation does produce a change in the quality of the medita-tor’s moment-to-moment conscious experience.