Shingles too is caused by the herpes virus varicella-zoster.

Shingles too is caused by the herpes virus varicella-zoster. An attack is a result of the reactivation, usually for no obvious reason, of virus that has remained dormant in a sensory root ganglion since an earlier episode of chickenpox (varicella). The incidence of shingles is highest in old age, and in conditions such as Hodgkin’s disease, AIDS and leukaemia, which weaken normal defence mechanisms. Shingles does not occur in epidemics; its clinical manifestations are caused by virus acquired in the past. However, patients with zoster can transmit the virus to others in whom it will cause chickenpox (Fig. 14.27). 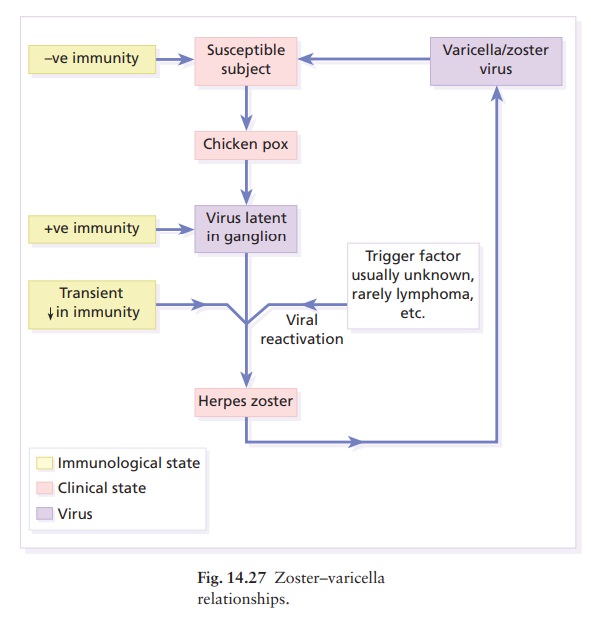 Zoster is characteristically unilateral (Fig. 14.28). It may affect more than one adjacent dermatome. The thoracic segments and the ophthalmic division of the trigeminal nerve are involved disproportionately often. 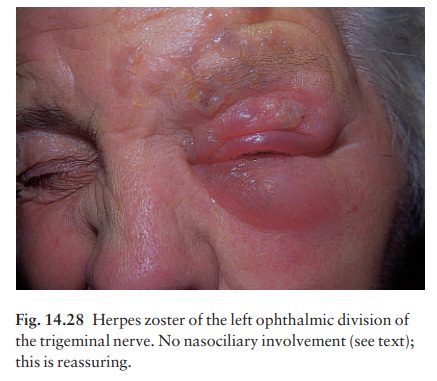 It is not uncommon for a few pock-like lesions to be found outside the main segment of involvement, but a generalized chickenpox-like eruption accompanying segmental zoster should raise suspicions of an under-lying immunocompromised state or malignancy, par-ticularly if the lesions are unusually haemorrhagic or necrotic.

•   Motor nerve involvement is uncommon, but has led to paralysis of ocular muscles, the facial muscles, the diaphragm and the bladder.

•   Zoster of the ophthalmic division of the trige-minal nerve can lead to corneal ulcers and scarring. A good clinical clue here is involvement of the naso-ciliary branch (vesicles grouped on the side of the nose).

•   Persistent neuralgic pain, after the acute episode is over, is most common in the elderly.

Occasionally, before the rash has appeared, the initial pain is taken for an emergency such as acute appendicitis or myocardial infarction. Otherwise, the dermatomal distribution, and the pain, allow zoster to be distinguished easily from herpes simplex, eczema and impetigo.

Cultures are of little help as they take 5–7 days, and are only positive in 70% of cases. Biopsy or Tzanck smears show multinucleated giant cells and a ballooning degeneration of keratinocytes, indicative of a herpes infection. Any clinical suspicions about underlying conditions, such as Hodgkin’s disease, chronic lymphatic leukaemia or AIDS, require further investigation.

Systemic treatment should be given to all patients if diagnosed in the early stages of the disease. It is essen-tial that this treatment should start within the first 5 days of an attack. Famciclovir and valaciclovir are as effective as aciclovir; they depend on virus-specific thymidine kinase for their antiviral activity. All three drugs are safe, and using them may cut down the chance of getting postherpetic neuralgia, particularly in the elderly.

If diagnosed late in the course of the disease, systemic treatment is not likely to be effective and treatment should be supportive with rest, analgesics and bland applications such as calamine. Secondary bacterial infection should be treated appropriately.

A trial of systemic carbamazepine, gabapentin or amitriptyline, or 4 weeks of topical capsaicin cream, despite the burning sensation it sometimes causes, may be worthwhile for established post-herpetic neuralgia.

Herpesvirus hominis is the cause of herpes simplex. The virus is ubiquitous and carriers continue to shed virus particles in their saliva or tears. It has been separated into two types. The lesions caused by type II virus occur mainly on the genitals, while those of type I are usually extragenital; however, this distinction is not absolute.

The route of infection is through mucous mem-branes or abraded skin. After the episode associated with the primary infection, the virus may become latent, possibly within nerve ganglia, but still cap-able of giving rise to recurrent bouts of vesication (recrudescences).

The most common recognizable manifestation of a primary type I infection in children is an acute gin-givostomatitis accompanied by malaise, headache, fever and enlarged cervical nodes. Vesicles, soon turn-ing into ulcers, can be seen scattered over the lips and mucous membranes. The illness lasts about 2 weeks.

The virus can also be inoculated directly into the skin (e.g. during wrestling). A herpetic whitlow is one example of this direct inoculation. The uncom-fortable pus-filled blisters on a fingertip are seen most often in medical personnel attending patients with unsuspected herpes simplex infections.

These strike in roughly the same place each time. They may be precipitated by respiratory tract infections (cold sores), ultraviolet radiation, menstruation or even stress. Common sites include the face (Fig. 14.29) and lips (type I), and the genitals (type II), but lesions can occur anywhere. Tingling, burning or even pain is followed within a few hours by the development of erythema and clusters of tense vesicles. Crusting occurs within 24 – 48 h and the whole episode lasts about 12 days. 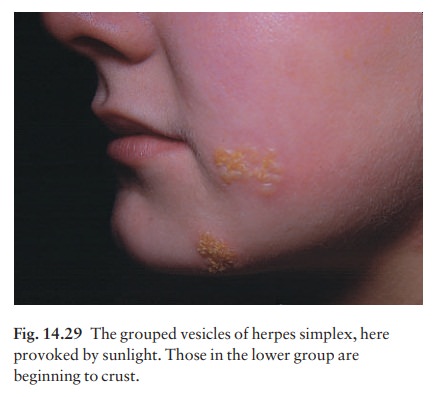 •   Herpes encephalitis or meningitis can occur with-out any cutaneous clues.

•   Disseminated herpes simplex: widespread vesicles may be part of a severe illness in newborns, debilitated children or immunosuppressed adults.

•   In some patients, recurrent herpes simplex infections are regularly followed by erythema multiforme.

None are usually needed. Doubts over the diagnosis can be dispelled by culturing the virus from vesicle fluid. Antibody titres rise with primary, but not with recurrent infections.

‘Old-fashioned’ remedies suffice for occasional mild recurrent attacks; sun block may cut down their frequency. Dabbing with surgical spirit is helpful, and secondary bacterial infection can be reduced by topical bacitracin, mupirocin, framycetin or fusidic acid. For more severe and frequent attacks, aciclovir cream, if used at the first sign of the recrudescence, and applied five or six times a day for the first 4 days of the episode, cuts down the length of attacks and perhaps increases the intervals between them.

Aciclovir tablets, 200 mg five times daily for 5 days, is more effective and can be given to those with widespread or systemic involve-ment. Recurrences in the immunocompromised can usually be prevented by long-term treatment at a lower dosage. Famciclovir and valaciclovir are meta-bolized by the body into aciclovir and are as effective as aciclovir, having the additional advantage of need-ing fewer doses per day.