Bacterial infections: The resident flora of the skin

The surface of the skin teems with micro-organisms, which are most numerous in moist hairy areas, rich in sebaceous glands.

The resident flora of the skin

The surface of the skin teems with micro-organisms, which are most numerous in moist hairy areas, rich in sebaceous glands. Organisms are found, in clusters, in irregularities in the stratum corneum and within the hair follicles. The resident flora is a mixture of harm-less and poorly classified staphylococci, micrococci and diphtheroids. Staphylococcus epidermidis and aerobic diphtheroids predominate on the surface, and anaerobic diphtheroids (proprionibacteria sp.) deep in the hair follicles. Several species of lipophilic yeasts also exist on the skin. The proportion of the differ-ent organisms varies from person to person but, once established, an individual’s skin flora tends to remain stable and helps to defend the skin against outside pathogens by bacterial interference or anti-biotic production. Nevertheless, overgrowth of skin diphtheroids can itself lead to clinical problems.

This is a common condition, seen, if looked for, in up to one-quarter of adult males. The axillary hairs become beaded with concretions, usually yellow, made up of colonies of commensal diphtheroids. Clothing becomes stained in the armpits. Topical antibiotic ointments, or shaving, will clear the condition.

The combination of unusually sweaty feet and occlusive shoes encourages the growth of diphtheroid organisms that can digest keratin. 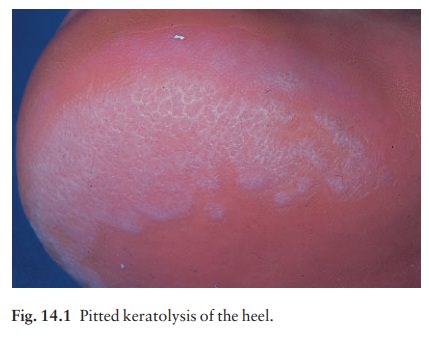 The result is a cribriform pattern of fine punched-out depressions on the plantar surface (Fig. 14.1), coupled with an unpleasant smell (of methane-thiol). Fusidic acid or mupirocin ointment is usually effective. Occlusive footwear should be replaced by sandals and cotton socks if possible.

Some diphtheroid members of the skin flora pro-duce porphyrins when grown in a suitable medium; as a result their colonies fluoresce coral pink under Wood’s light. Overgrowth of these strains is some-times the cause of symptom-free macular wrinkled slightly scaly pink, brown or macerated white areas, most often found in the armpits or groins, or between the toes. In diabetics, larger areas of the trunk may be involved. Diagnosis is helped by the fact that these areas also fluoresce coral pink with Wood’s light. Topical fusidic acid or miconazole will clear the condition.

Staphylococcus aureus is not part of the residentflora of the skin other than in a minority who carry it in their nostrils, perineum or armpits. Carriage rates vary with age. Nasal carriage is almost invariable in babies born in hospital, becomes less frequent during infancy, and rises again during the school years to the adult level of roughly 30%. Rather fewer carry the organism in the armpits or groin. Staphylococci can also multiply on areas of diseased skin such as eczema, often without causing obvious sepsis. A minor breach in the skin’s defences is probably neces-sary for a frank staphylococcal infection to establish itself; some strains are particularly likely to cause skin sepsis.

Impetigo may be caused by staphylococci, strepto-cocci, or by both together. As a useful rule of thumb, the bullous type is usually caused by Staphylococcusaureus, whereas the crusted ulcerated type is causedby β-haemolytic strains of streptococci. Both are highly contagious.

Presentation  A thin-walled flaccid clear blister forms, and may become pustular before rupturing to leave an extend-ing area of exudation and yellowish crusting (Fig. 14.2). Lesions are often multiple, particularly around the face. The lesions may be more obviously bullous in infants. A follicular type of impetigo (superficial folliculitis) is also common. 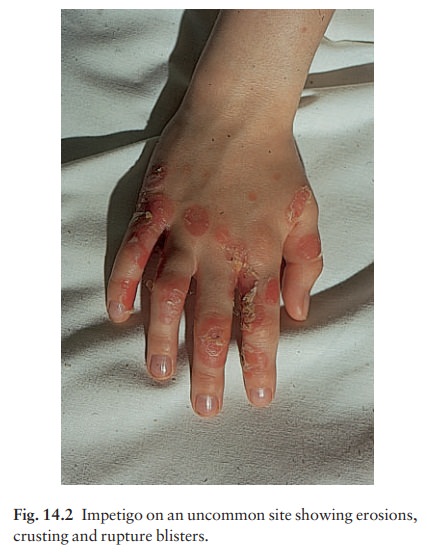 The condition can spread rapidly through a family or class. It tends to clear slowly even without treatment.

Herpes simplex may become impetiginized, as may eczema. Always think of a possible underlying cause such as this. Recurrent impetigo of the head and neck, for example, should prompt a search for scalp lice.

The diagnosis is usually made on clinical grounds. Swabs should be taken and sent to the laboratory for culture, but treatment must not be held up until the results are available. Systemic antibiotics (such as flucloxacillin, erythromycin or cephalexin (cefalexin)) are needed for severe cases or if a nephritogenic strain of strepto-coccus is suspected (penicillin V). For minor cases the removal of crusts and a topical antibiotic such as neo-mycin, fusidic acid (not available in the USA), mupirocin or bacitracin will suffice.

This term describes ulcers forming under a crusted surface infection. The site may have been that of an insect bite or of neglected minor trauma. The bacterial

pathogens and their treatment are similar to those of impetigo; however, in contrast to impetigo, ecthyma heals with scarring.

A boil is an acute pustular infection of a hair follicle, usually with Staphylococcus aureus. Adolescent boys are especially susceptible to them.

A tender red nodule enlarges, and later may discharge pus and its central ‘core’ before healing to leave a scar. Fever and enlarged draining nodes complete the picture. Most patients have one or two boils only, and then clear; a few suffer from a tiresome sequence of boils (chronic furunculosis).

Cavernous sinus thrombosis is an unusual complication of boils on the central face. Septicaemia may occur but is rare.

The diagnosis is straightforward but hidradenitis suppurativa  should be considered if only the groin and axillae are involved.

•   Culture swabs from lesions, and carrier sites (nostrils, perineum) of the patient and immediate family.

•   Immunological evaluation only if the patient has recurrent or unusual internal infections too.

•   Treat carrier sites such as the nose and groin twice daily for 6 weeks with an appropriate topical antiseptic or antibiotic (e.g. chlorhexidine solution, mupirocin cream or clindamycin solution). Treat family carriers in the same way. 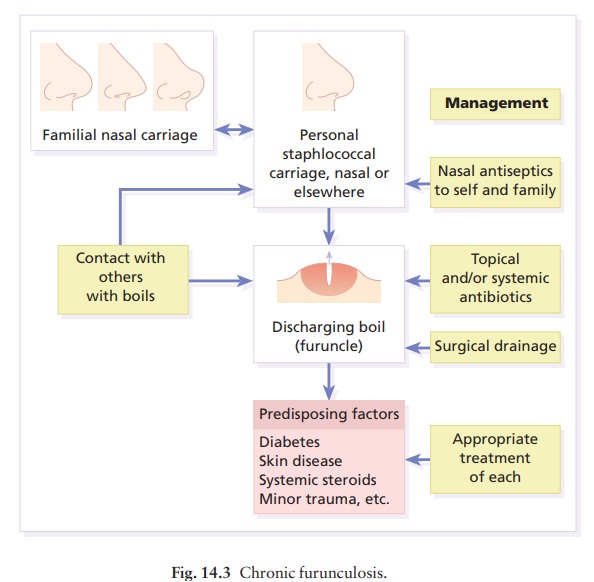 A group of adjacent hair follicles becomes deeply infected with Staphylococcus aureus, leading to a swollen painful suppurating area discharging pus from several points. The pain and systemic upset are greater than those of a boil. Diabetes must be excluded. Treatment needs both topical and systemic antibiotics. Incision and drainage has been shown to speed up healing, although it is not always easy when there are multiple deep pus-filled pockets. Con-sider the possibility of a fungal kerion  in unresponsive carbuncles.

In this condition the skin changes resemble a scald. Erythema and tenderness are followed by the loosen-ing of large areas of overlying epidermis (Fig. 14.4). 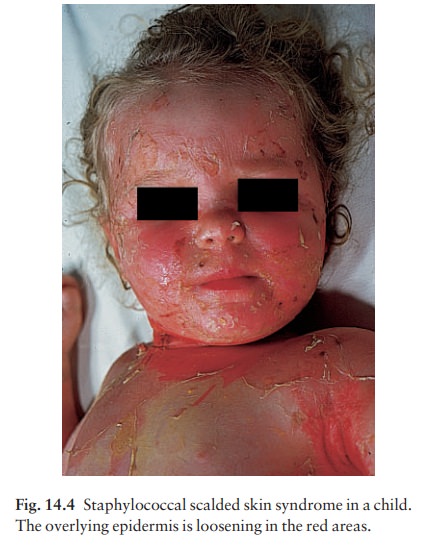 In children the condition is usually caused by a staphylo-coccal infection elsewhere (e.g. impetigo or conjunct-ivitis). Organisms in what may be only a minor local infection release a toxin (exfoliatin) that causes a split to occur high in the epidermis. With systemic anti-biotics the outlook is good.

A staphylococcal toxin is also responsible for this con-dition, in which fever, a rashausually a widespread erythemaaand sometimes circulatory collapse are fol-lowed a week or two later by characteristic desquama-tion, most marked on the fingers and hands. Many cases have followed staphylococcal overgrowth in the vagina of women using tampons. Systemic antibiotics and irrigation of the infected site are needed.