The AIDS epidemic was first recognized in the USA in 1981. The early cases were male homosexuals with pneumocystis pneumonia or Kaposi’s sarcoma and immunosuppression.

The AIDS epidemic was first recognized in the USA in 1981. The early cases were male homosexuals with pneumocystis pneumonia or Kaposi’s sarcoma and immunosuppression. Later it became clear that the human immunodeficiency virus (HIV) could be acquired from contaminated body fluids, particularly semen and blood, in many ways, the importance of which varies from country to country. In the UK and the USA, for example, most cases have been homo-sexual or bisexual men; in parts of Africa, on the other hand, the disease is most often spread heterosexually.

Other groups at high risk are intravenous drug abusers who share contaminated needles and syringes, and haemophiliacs who were given infected blood products. Up to a half of babies born to infected mothers will be infected transplacentally.

The global epidemic is not slackening off though the pattern of transmission in industrialized nations is changing. Heterosexual transmission now accounts for 25–30% of new cases in Europe and the USA. In 1999, about 5.4 million people were newly infected with HIV.

The human immunodeficiency viruses, HIV-1 and HIV-2 (mainly in West Africa), are RNA retroviruses containing reverse transcriptase enzymes, which allow the viral DNA copy to be incorporated into the chro-mosomes of the host cell. Their main target is a subset of T lymphocytes (helper/inducer cells) that express glycoprotein CD4 molecules on their surface. These bind to the surface envelope of the HIV. Viral replication within the helper/inducer cells kills them, and their depletion leads to the loss of cell-mediated immunity so characteristic of HIV infection. A variety of opportunistic infections may then follow.

The original infection may be asymptomatic, or followed by a glandular fever-like illness at the time of seroconversion. After a variable latent phase, which may last several years, a persistent generalized lym-phadenopathy develops. The term ‘AIDS-related complex’ refers to the next stage, in which many of the symptoms of AIDS (e.g. fever, weight-loss, fatigue or diarrhoea) may be present without the opportunis-tic infections or tumours characteristic of full-blown AIDS. Not all of those infected with HIV will develop AIDS but, for those who do, the average time from infection to the onset of AIDS is about 10 years. Once AIDS develops, if untreated, about half will die within 1 year and three-quarters within 4 years.

Skin conditions are often the first clue to the presence of AIDS. The following are important:

1  Kaposi’s sarcoma (Figs 14.32–14.34) is the initialpresentation in a decreasing percentage of AIDS patients, particularly homosexual men. The lesions of classical Kaposi’s sarcoma are multiple purplish patches or nodules (see Fig. 19.49). In AIDS the lesions may be atypical, sometimes looking like bruises or pyogenic granulomata. The diagnosis can easily be missed and the mouth must always be examined. 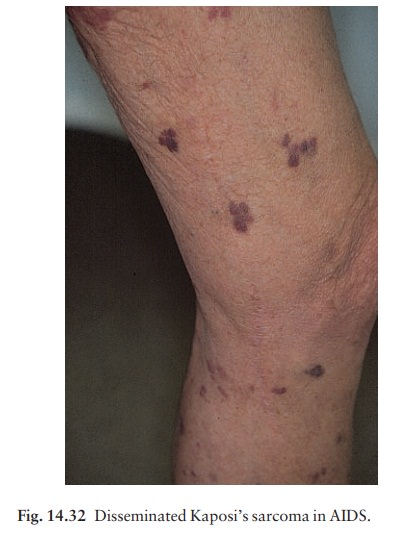 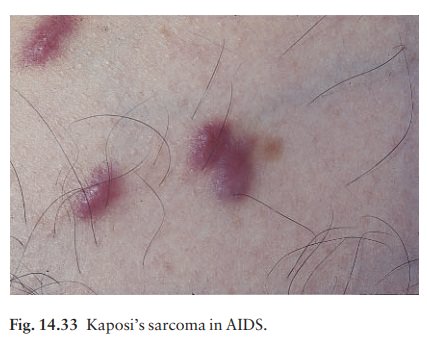 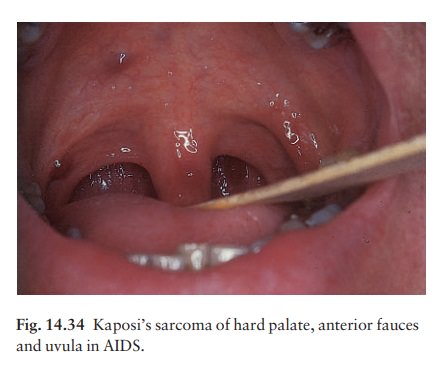 2 Seborrhoeic eczema and folliculitis(Fig. 14.35)are seen in at least 50% of patients, often starting at an early stage of immunosuppression. The underlying cause may be an overgrowth of Pityrosporum yeasts. An itchy folliculitis of the head, neck and trunk, and an eosinophilic folliculitis, possibly as a result of the multiplication of Demodex folliculorum, have also been described. 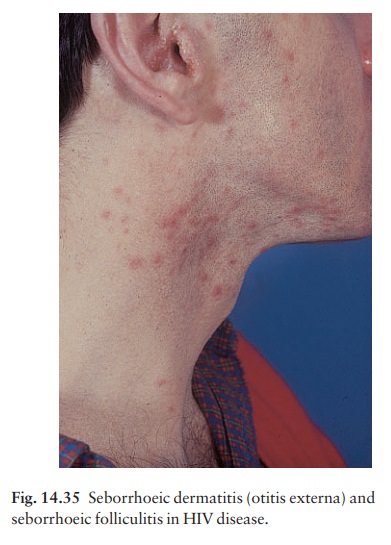 3 Skin infectionsaflorid, unusually extensive or atyp-ical examples of common infections may be seen with one or more of the following:

herpes simplex, herpes zoster, molluscum contagiosum, oral and cutaneous candida, tinea, pityriasis versicolor, scabies and staphylococci. Facial and perianal warts are common. Hairy leukoplakia (Fig. 14.36), often on the sides of the tongue, may be caused by proliferation of the Epstein–Barr virus. Bacillary angiomatosis may look like Kaposi’s sarcoma and is caused by the bacillus that causes cat-scratch fever. Syphilis can coexist with AIDS, as can mycobacterial infections. 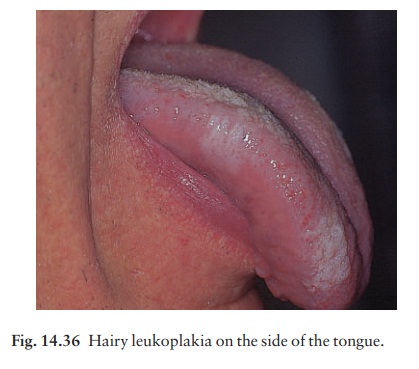 4 Other manifestationsadry skin is common inAIDS; so is pruritus. Psoriasis may start or worsen with AIDS. Diffuse alopecia is not uncommon. Drug eruptions are often seen in AIDS patients.

The clinical diagnosis of HIV infection is confirmed by a positive blood test for antibodies to the virus. Patients should be counselled before and after testing for HIV antibody. Sexual contacts of infected indi-viduals should be traced.

Modern drugs for HIV infections increase life expectancy, but are not ‘cures’ in the usual sense. They reduce the viral load but are expensive and sometimes toxic. Guidelines on how to use them change con-stantly, and so the drug treatment of HIV infections should be directed by specialists in the field, who will monitor the plasma viral load and CD4 count regularly (Table 14.1). Difficult decisions to be made include the timing of treatmentathe benefits of starting early have to be balanced against the risk of toxicityaand choosing the right drug combination of highly active antiretroviral treatment (HAART)a usually triple therapy with two nucleoside reverse transcriptase inhibitors plus either a non-nucleoside reverse transcriptase inhibitor or a protease inhibitor. The regimen will be changed if there is clinical or virological deterioration, or if the patient becomes pregnant, although the teratogenic potential of most of these drugs is still not known. 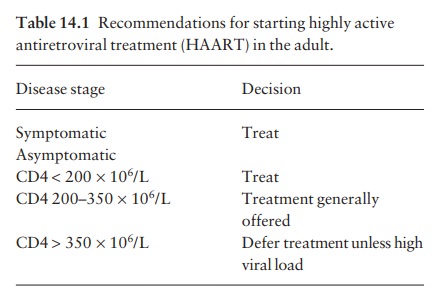 Treatment otherwise is symptomatic and varies according to the type of opportunistic infection detected. Prophylactic treatment against a number of life-threatening infections is also worthwhile, and prolongs life expectancy. Educating the public to avoid risky behaviour, such as unprotected sexual intercourse, is still hugely important.