Erysipelas: The first warning of an attack is often malaise, shiver-ing and a fever.

The first warning of an attack is often malaise, shiver-ing and a fever. After a few hours the affected area of skin becomes red, and the eruption spreads with a well-defined advancing edge. Blisters may develop on the red plaques (Fig. 14.5). Untreated, the con-dition can even be fatal, but it responds rapidly to systemic penicillin, sometimes given intravenously. The causative streptococci usually gain their entry through a split in the skin, e.g. between the toes or under an ear lobe. 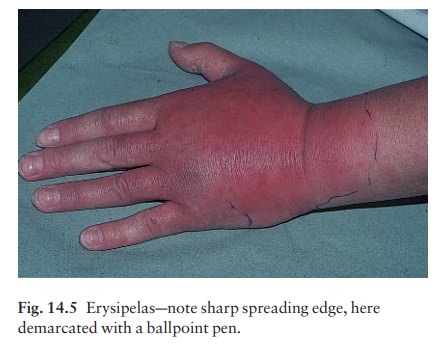 Episodes can affect the same area repeatedly and so lead to persistent lymphoedema. Low dosage long-term oral penicillin V will usually cut down the frequency of recurrences. The cause of the original skin split, perhaps a minor tinea pedis, should be treated too.

This inflammation of the skin occurs at a deeper level than erysipelas. The subcutaneous tissues are involved; and the area is more raised and swollen, and the erythema less marginated than in erysipelas. Cellulitis often follows an injury and favours areas of hypo-static oedema. Streptococci, staphylococci or other organisms may be the cause. Treatment is elevation, restasometimes in hospitalaand systemic antibiotics, sometimes given intravenously.

A mixture of pathogens, usually including streptococci and anaerobes, is responsible for this rare condition, which is a surgical emergency. At first the infection resembles a dusky, often painful, cellulitis, but it quickly turns into an extending necrosis of the skin and subcutaneous tissues. A deep â€˜stabâ€™ incision biopsy through the skin into the fascia may be neces-sary to obtain material for bacteriological culture. A magnetic resonance imaging (MRI) scan may help to establish how far the infection has spread. The prognosis is often poor despite early surgical de-bridement and prompt intravenous antibiotics, even when given before the bacteriological results are available.

It is convenient to mention this here, but the causat-ive organism is Erysipelothrix insidiosa and not a streptococcus. It infects a wide range of animals, birds and fish. In humans, infections are most common in butchers, fishmongers and cooks, the organisms penetrating the skin after a prick from an infected bone. Such infections are usually mild, and localized to the area around the inoculation site. The swollen purple area spreads slowly with a clear-cut advancing edge. With penicillin the condition clears quickly; without it, resolution takes several weeks.

The infective agent is the bacillus Rochalimaeahenselae. A few days after a cat bite or scratch, areddish granulomatous papule appears at the site of inoculation. Tender regional lymphadenopathy follows some weeks later, and lasts for several weeks, often being accompanied by a mild fever. The glands may discharge before settling spontaneously. There is no specific treatment.