Histoplasma capsulatum is found in soil and in thedroppings of some animals (e.g. bats).

Histoplasma capsulatum is found in soil and in thedroppings of some animals (e.g. bats). Airborne spores are inhaled and cause lung lesions, which are in many ways like those of tuberculosis. Later, granulo-matous skin lesions may appear, particularly in the immunocompromised. Amphotericin B or itracona-zole, given systemically, is often helpful.

The causative organism, Coccidioides immitis, is present in the soil in arid areas in the USA. Its spores are inhaled, and the pulmonary infection may be accompanied by a fever. At this stage erythema nodosum  may be seen. In a few patients the infection becomes dis-seminated, with ulcers or deep abscesses in the skin. Treatment is with amphotericin B or itraconazole.

Infections with Blastomyces dermatitidis are virtually confined to rural areas of the USA. Rarely, the organ-ism is inoculated into the skin; more often it is inhaled and then spreads systemically from the pulmonary focus to other organs including the skin. There the lesions are wart-like, hyperkeratotic nodules, which spread peripherally with a verrucose edge, while tend-ing to clear and scar centrally. Treatment is with sys-temic amphotericin B or itraconazole.

The causative fungus, Sporotrichum schencki, lives sap-rophytically in soil or on wood in warm humid countries.

Infection is through a wound, where later a lesion like an indolent boil arises. Later still, nodules appear in succession along the draining lymphatics (Fig. 14.15). Potassium iodide or itraconazole are both effective. 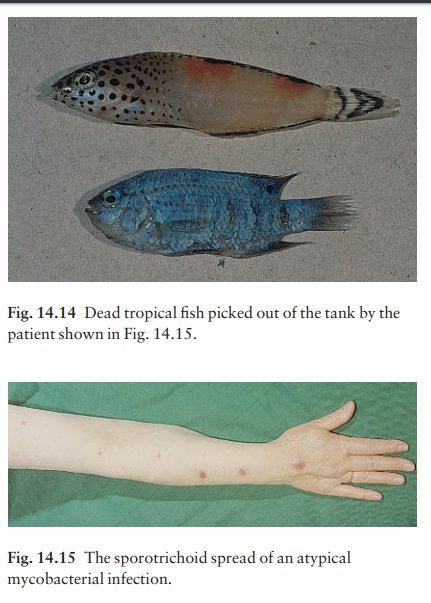 The causative organism, Actinomyces israeli, is bacte-rial but traditionally considered with the fungi. It has long branching hyphae and is part of the normal flora of the mouth and bowel. In actinomycosis, a lumpy induration and scarring coexist with multiple sinuses discharging pus containing â€˜sulphur granulesâ€™, made up of tangled filaments. Favourite sites are the jaw, and the chest and abdominal walls. Long-term peni-cillin is the treatment of choice.

Various species of fungus or actinomycetes may be involved. They gain access to the subcutaneous tissues, usually of the feet or legs, via a penetrating wound. The area becomes lumpy and distorted, later enlarg-ing and developing multiple sinuses. Pus exuding from these shows tiny diagnostic granules. Surgery may be a valuable alternative to the often poor results of medical treatment, which is with systemic antibio-tics or antifungal drugs, depending on the organism isolated.