Dermatophytes invade keratin only, and the inflam-mation they cause is due to metabolic products of the fungus or to delayed hypersensitivity. In gen-eral, zoophilic fungi (those transmitted to humans by animals) cause a more severe inflammation than anthropophilic ones (spread from person to person).

This depends upon the site and on the strain of fungus involved.

This is the most common type of fungal infection in humans. The sharing of wash places (e.g. in show-ers) and of swimming pools, predisposes to infection; occlusive footwear encourages relapses.

Most cases are caused by one of three organisms:

Trichophyton rubrum (the  most  common  and  the most stubborn), Trichophyton mentagrophytes var.

There are three common clinical patterns. 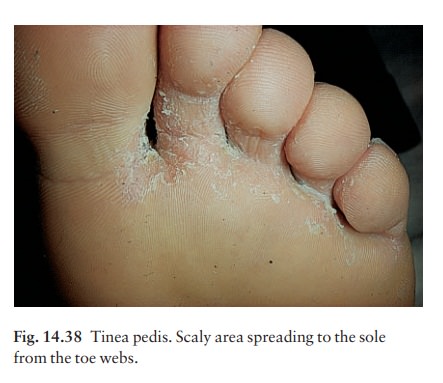 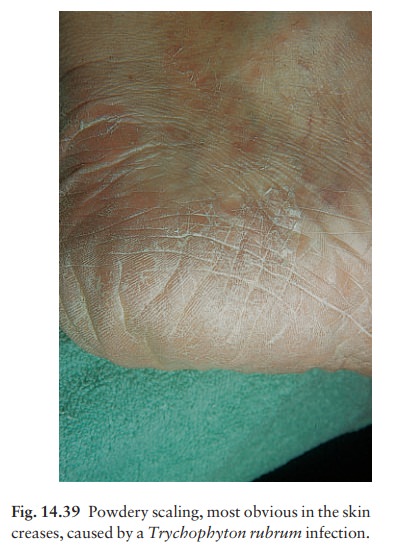 Tinea of the nails

Toenail infection is usually associated with tinea pedis. The initial changes occur at the free edge of the nail, which becomes yellow and crumbly (Fig. 14.40). Subungual hyperkeratosis, separation of the nail from its bed, and thickening may then follow. Usually only a few nails are infected but rarely all are. Fingernail lesions are similar, but less common, and are seldom seen without a chronic T. rubrum infection of the skin of the hands. 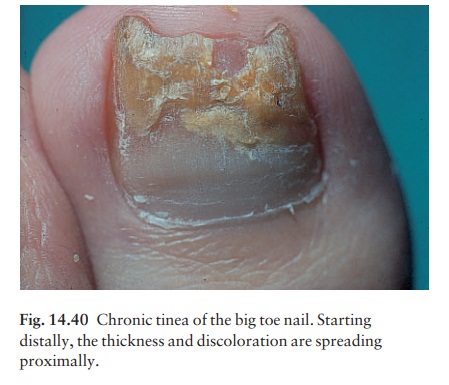 Tinea of the hands

This is usually asymmetrical and associated with tinea pedis. T. rubrum may cause a barely perceptible erythema of one palm with a characteristic powdery scale in the creases.

Tinea of the groin

This is common and affects men more often than women. The eruption is sometimes unilateral or asymmetrical. The upper inner thigh is involved and lesions expand slowly to form sharply demarcated plaques with peripheral scaling (Fig. 14.41). In con-trast to candidiasis of the groin area, the scrotum is usually spared. A few vesicles or pustules may be seen within the lesions. The organisms are the same as those causing tinea pedis. 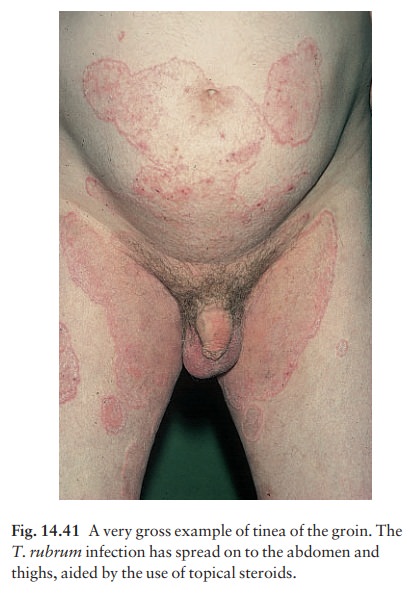 Tinea of the trunk and limbs

Tinea corporis is characterized by plaques with scal-ing and erythema most pronounced at the periphery. A few small vesicles and pustules may be seen within them. The lesions expand slowly and healing in the centre leaves a typical ring-like pattern.

Tinea of the scalp (tinea capitis)

This is usually a disease of children. The causative organism varies from country to country.

Fungi coming from animal sources (zoophilic fungi) induce a more intense inflammation than those spread from person to person (anthropophilic fungi). In ring-worm acquired from cattle, for example, the boggy swelling, with inflammation, pustulation and lymphad-enopathy, is often so fierce that a bacterial infection is suspected; such a lesion is called a kerion and the hair loss associated with it may be permanent. Tinea of the beard area is usually caused by zoophilic species and shows the same features (Fig. 14.42). Anthropophilic organisms cause bald rather scaly areas, with minimal inflammation and hairs broken off 3–4 mm from the scalp.

In favus, caused by Trichophyton schoenleini, the picture is dominated by foul-smelling yellowish crusts surrounding many scalp hairs, and sometimes leading to scarring alopecia.

1  Fierce animal ringworm of the scalp (Fig. 14.43) can lead to a permanent scarring alopecia.

2 A florid fungal infection anywhere can inducevesication on the sides of the fingers and palms (a trichophytide).

3  Epidemics of ringworm occur in schools.

4  The usual appearance of a fungal infection can be masked by mistreatment with topical steroids (tinea incognito; Fig. 14.44). 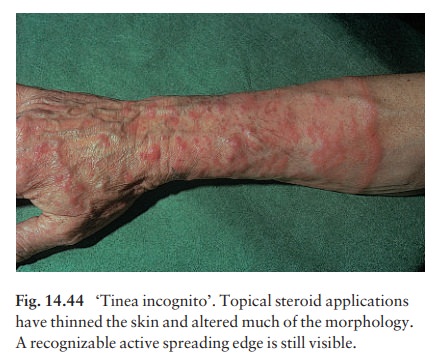 This varies with the site. Some of the more common problems are listed in Table 14.2. 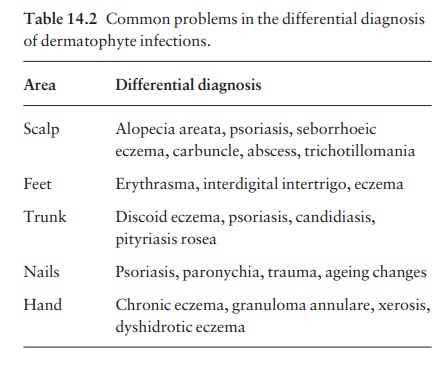 The microscopic examination of a skin scraping, nail clipping or plucked hair is a simple procedure.

The scraping should be taken from the scaly margin of a lesion, with a small curette or a scalpel blade, and clippings/scrapings from the most crumbly part of a nail. Broken hairs should be plucked with tweezers. Specimens are cleared in potassium hydrox-ide. Branching hyphae can easily be seen (see Fig. 3.7) using a scanning (× 10) or low-power (× 25) objective lens, with the iris diaphragm almost closed, and the condenser racked down. Hyphae may also be seen within a cleared hair shaft, or spores may be noted around it.

Cultures should be carried out in a mycology orbacteriology laboratory. Transport medium is not necessary, and specimens should be sent in folded black paper. The report may take as long as a month; microscopy is much quicker.

Wood’s light (ultraviolet light) examination of thescalp usually reveals a green fluorescence of the hairs in Microsporum audouini and M. canis infections. The technique is useful for screening children in insti-tutions where outbreaks of tinea capitis still some-times occur, but some fungi (e.g. Trichophytontonsurans) do not fluoresce.

This is all that is needed for minor skin infections. The more recent imidazole preparations (e.g. miconazole and clotrimazole) and the allylamines such as terbina-fine, have largely superseded time-honoured remedies such as benzoic acid ointment (Whitfield’s ointment) and tolnaftate. They should be applied twice daily. Magenta paint (Castellani’s paint), although highly coloured, is helpful for exudative or macerated areas in body folds or toe webs. Occasional dusting with an antifungal powder is useful to prevent relapses.

Topical nail preparations. Many patients now pre-fer to avoid systemic treatment. For them a nail lacquer containing amorolfine is worth a trial. It should be applied once or twice a week for 6 months; it is effective against stubborn moulds such as Hendersonula and Scopulariopsis. Both amorolfineand tioconazole nail solutions can be used as adjuncts to systemic therapy .

This is needed for tinea of the scalp or of the nails, and for widespread or chronic infections of the skin that have not responded to local measures.

Terbinafine  has now largelysuperceded griseofulvin. It acts by inhibiting fungal squalene epoxidase and does not interact with the cytochrome P-450 system. It is fungicidal and so cures chronic dermatophyte infections more quickly and more reliably than griseofulvin. For tinea capitis in children, for example, a 4-week course of terbinafine is as effective as an 8-week course of griseofulvin. Cure rates of 70–90% can be expected for infected fingernails after a 6-week course of terbinafine, and for infected toenails after a 3-month course. It is not effective in pityriasis versicolor or Candida infections.

Griseofulvin  was for manyyears the drug of choice for chronic dermatophyte infections. It has proved to be a safe drug, but treat-ment may have to be stopped because of persistent headache, nausea, vomiting or skin eruptions. The drug should not be given in pregnancy or to patients with liver failure or porphyria. It interacts with coumarin anticoagulants, the dosage of which may have to be increased. Its effectiveness falls if barbitur-ates are being taken at the same time.

Griseofulvin is fungistatic and treatment for infected nails has to be prolonged (an average of 12 months for fingernails, and at least 18 months for toe-nails). The disappointing results for toenail infections seen in some 30 – 40% of cases can be improved by the concomitant use of topical nail preparations .

Itraconazole (Formulary 2) is now pre-ferred to ketoconazole, which occasionally damages the liver, and is a reasonable alternative to terbinafine and griseofulvin if these are contraindicated. It is effective in tinea corporis, cruris and pedis; and also in nail infections, although without a licence for this use in many countries. Fungistatic rather than fun-gicidal, it interferes with the cytochrome P-450 sys-tem, so a review of any other medication being taken is needed before a prescription is issued. Its wide spectrum makes it useful also in pityriasis versicolor and candidiasis.