The vertical sync pulse train added after each field is somewhat complex in nature. The reason for this stems from the fact that it has to meet several exacting requirements.

The vertical sync pulse train added after each field is somewhat complex in nature. The reason for this stems from the fact that it has to meet several exacting requirements.

Therefore, in order to fully appreciate the various constituents of the pulse train, the vertical sync details are explored step by step while explaining the need for its various components.

The basic vertical sync added at the end of both even add odd fields is shown in Fig. Its width has to be kept much larger than the horizontal sync pulse, in order to derive a suitable field sync pulse at the receiver to trigger the field sweep oscillator. The standards specify that the vertical sync period should be 2.5 to 3 times the horizontal line period. If the width is less than this, it becomes difficult to distinguish between horizontal and vertical pulses at the receiver.

In color TV transmission a short sample (8 to 10 cycles) of the color subcarrier oscillator output is sent to the receiver for proper detection of color signal sidebands.

This is known as color burst and is located at the back porch of the horizontal blanking pedestal. If the width is greater than this, the transmitter must operate at peak power for an unnecessarily long interval of time. In the 625 line system 2.5 line period (2.5 × 64 = 160 µ s) has been allotted for the vertical sync pulses.

Thus a vertical sync pulse commences at the end of 1st half of 313th line (end of first field) and terminates at the end fo 315th line. Similarly after an exact interval of 20 ms (one field period) the next sync pulse occupies line numbers 1st, 2nd and 1st half of third, just after the second field is over.

Note that the beginning of these pulses has been aligned in the figure to signify that these must occur after the end of vertical stroke of the beam in each field, i.e., after each 1/50th of a second.

However, a detailed examination of the pulse trains in the two fields would show that horizontal sync pulses continue to occur exactly at 64 µ s intervals (except during the vertical sync pulse periods) throughout the scanning period from frame to frame and the apparent shift of 32 µ s is only due to the alignment of vertical sync instances in the figure.

The process of deriving these pulses is illustrated in Fig. Furthermore, receivers often use mono stable multi-vibrators to generate horizontal scan, andso a pulse is required to initiate each and every cycle of the horizontal oscillator in the receiver. This brings out the first and most obvious shortcoming of the waveforms shown in Fig. 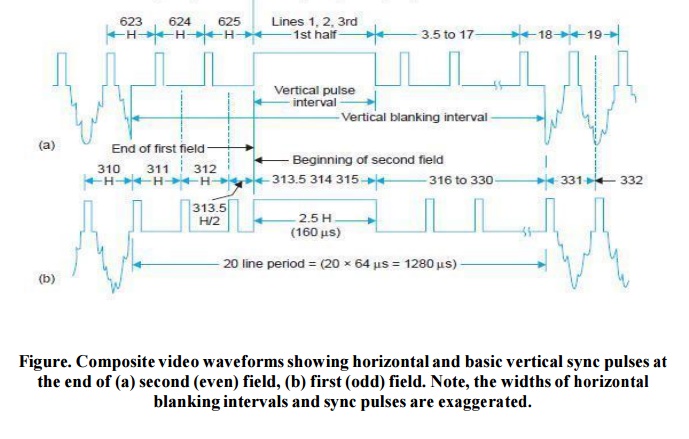 Thus the horizontal sweep oscillator that operates at 15625 Hz, would tend to step out of synchronism during each vertical sync period. The situation after an odd field is even worse.

As shown in Fig. the vertical blanking period at the end of an odd field begins midway through a horizontal line. Consequently, looking further along this waveform, we see that the leading edge of the vertical sync pulse comes at the wrong time to provide synchronization for the horizontal oscillator.

Therefore, it becomes necessary to cut slots in the vertical sync pulse at half-line-intervals to provide horizontal sync pulses at the correct instances both after even and odd fields.

The technique is to take the video signal amplitude back to the blanking level 4.7 µ s before the line pulses are needed. The waveform is then returned back to the maximum level at the moment the line sweep circuit needs synchronization.

Thus five narrow slots of 4.7 µ s width get formed in each vertical sync pulse at intervals of 32 µ s. The trailing but rising edges of these pulses are actually used to trigger the horizontal oscillator.

The resulting waveforms together with line numbers and the differentiated output of both the field trains is illustrated in Fig. 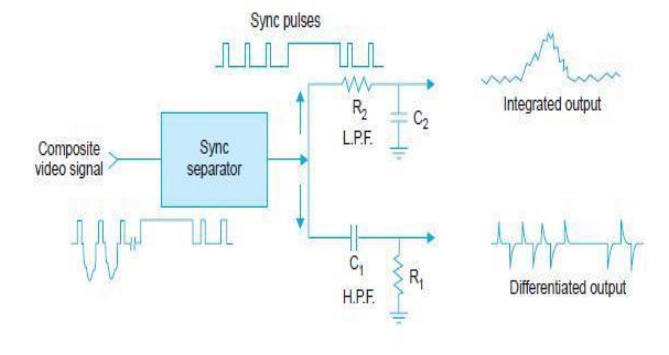 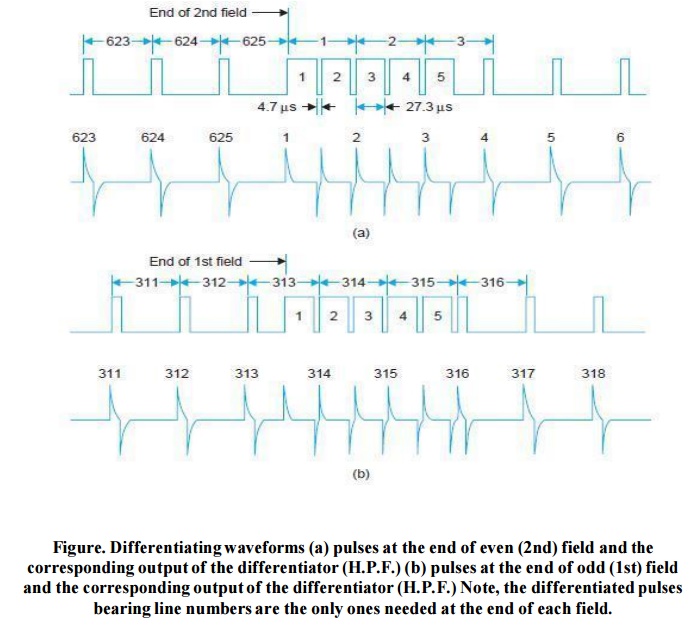 This insertion of short pulses is known as notching or serration of the broad field pulses. Note that though the vertical pulse has been broken to yield horizontal sync pulses, the effect on the vertical pulse is substantially unchanged.

It still remains above the blanking voltage level all of the time it is acting. The pulse width is still much wider than the horizontal pulse width and thus can be easily separated at the receiver.

Returning to Fig. it is seen that each horizontal sync pulse yields a positive spiked output from its leading edge and a negative spiked pulse from its trailing edge. Time-constant of the differentiating circuit is so chosen, that by the time a trailing edge arrives, the pulse due to the leading edge has just about decayed.

The negative-going triggering pulses may be removed with a diode since only the positive going pulses are effective in locking the horizontal oscillator. However, the pulses actually utilized are the ones that occur sequentially at 64 µ s intervals. Such pulses are marked with line numbers for both the fields. Note that during the intervals of serrated vertical pulse trains, alternate vertical spikes are utilized.

The pulses not used in one field are the ones utilized during the second field. This happens because of the half-line difference at the commencement of each field and the fact that notched vertical sync pulses occur at intervals of 32 µ s and not 64 µ s as required by the horizontal sweep oscillator.

The pulses that come at a time when they cannot trigger the oscillator are ignored. Thus the requirement of keeping the horizontal sweep circuit locked despite insertion of vertical sync pulses is realized.

Now we turn to the second shortcoming of the waveform of Fig. First it must be mentioned that synchronization of the vertical sweep oscillator in the receiver is obtained from vertical sync pulses by integration.

This is illustrated in Fig. where the time-constant R2C2 is chosen to be large compared to the duration of horizontal pulses but not with respect to width of the vertical sync pulses.

The integrating circuit may equall y be looked upon as a low pass filter, with a cut-off

frequency such that the horizontal sync pulses produce very little output, while the vertical pulses have a frequency that falls in the pass-band of the filter.

The voltage built across the capacitor of the low-pass filter (integrating circuit) corresponding to the sync pulse trains of both the fields is shown in Fig. Note that each horizontal pulse causes a slight rise in voltage across the capacitor but this is reduced to zero by the time the next pulse arrives.

This is so, because the charging period for the capacitor is only 4.7 µ s and the voltage at the input to the integrator remains at zero for the rest of the period of 59.3 µ s.

Hence there is no residual voltage across the vertical filter (L.P. filter) due to horizontal sync pulses. Once the broad serrated vertical pulse arrives the voltage across the output of the filter starts increasing. However, the built up voltage differs for each field.

The reason is not difficult to find. At the beginning of the first field (odd field) the last horz sync pulse corresponding to the beginning of 625th line is separated from the 1st vertical pulse by full one line and any voltage developed across the filter will have enough time to return to zero before the arrival of the first vertical pulse, and thus the filter output voltage builds up from zero in response to the five successive broad vertical sync pulses.

The voltage builds up because the capacitor has more time to charge and only 4.7 µ s to discharge. The situation, however, is not the same for the beginning of the 2nd (even) field. Here the last horizontal pulse corresponding to the beginning of 313th line is separated from the first vertical pulse by only half-a-line.

This is shown in dotted chain line in Fig. The vertical oscillator trigger potential level marked as trigger level in the diagram (Fig. )intersects the two filter output profiles at different points which indicates that in the case of second field the oscillator will get triggered a fraction of a second too soon as compared to the first field. Note that this inequality in potential levels for the two fields continues during the period of discharge of the capacitor once the vertical sync pulses are over and the horizontal sync pulses take-over.

Though the actual time difference is quite short it does prove sufficient to upset the desired interlacing sequence. End of 2nd field 1st field Equalizing pulses. To take care of this drawback which occurs on account of the half-a-line discrepancy five narrow pulses are added on either side of the vertical sync pulses.

The effect of these pulses is to shift the half-line discrepancy away both from the beginning and end of vertical sync pulses. Pre-equalizing pulses being of 2.3 µ s duration result in the discharge of the capacitor to essentially zero voltage in both the fields, despite the half-line discrepancy before the voltage build-up starts with the arrival of vertical sync pulses.

This is illustrated in Fig. Post-equalizing pulses are necessary for a fast discharge of the capacitor to ensure triggering of the vertical oscillator at proper time. If the decay of voltage across the capacitor is slow as would happen in the absence of post-equalizing pulses, the oscillator may trigger at the trailing edge which may be far-away from the leading edge and this could lead to an error in triggering.

Thus with the insertion of narrow pre and post equalizing pulses, the voltage rise and fall profile is essentially the same for both the field sequences (see Fig.) and the vertical oscillator is triggered at the proper instants, i.e., exactly at an interval of 1/50th of a second.

This problem could possibly also be solved by using an integrating circuit with a much larger time constant, to ensure that the capacitor remains virtually uncharged by the horizontal pulses. However, this would have the effect of significantly reducing the integrator output for vertical pulses so that a vertical sync amplifier would have to be used.

.From the comparison of the horizontal and vertical output pulse forms shown in Fig and it appears that the vertical trigger pulse (output of the low-pass filter) is not very sharp but actually it is not so. The scale hosen exaggerates the extent of the vertical pulses. The voltage build-up period is only 160 µ s and so far as the vertical synchronizing oscillator is concerned this pulse occurs rapidly and represents a sudden change in voltage which decays very fast. 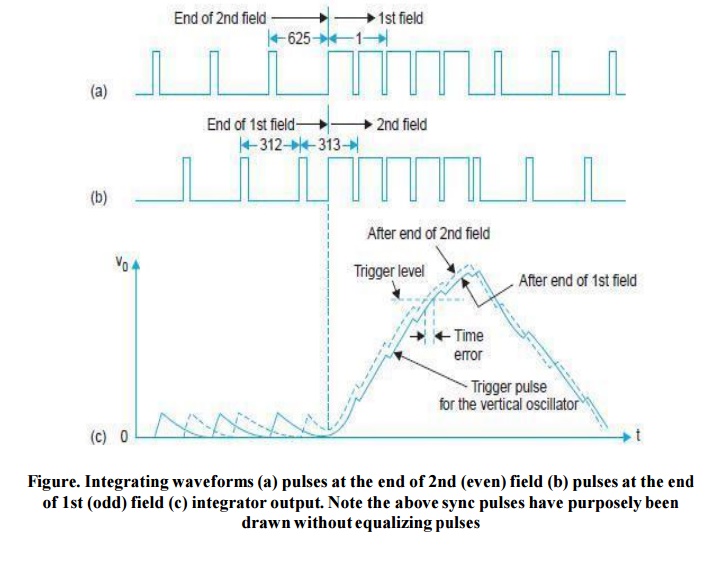 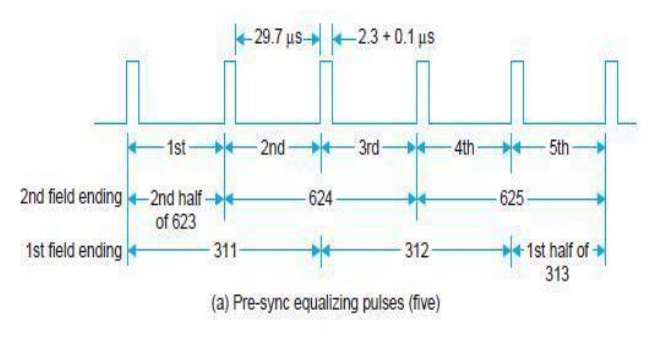 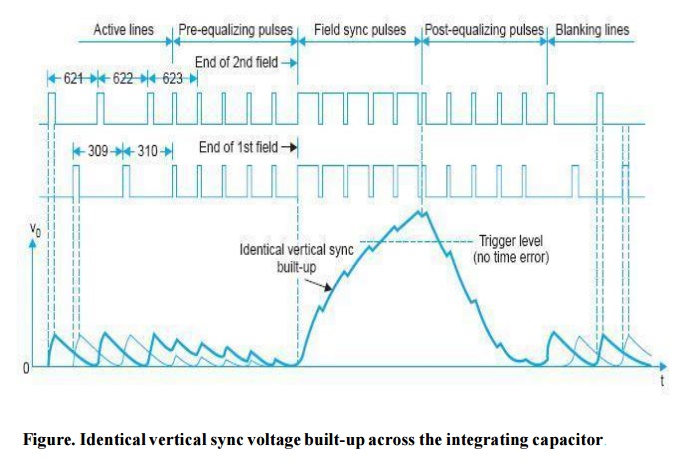