Most scenes have brightness gradations in the vertical direction. The ability of the scanning beam to allow reproduction of electrical signals according to these variations and the capability of the human eye to resolve these distinctly, while viewing the reproduced picture, depends on the total number of lines employed for scanning.

Most scenes have brightness gradations in the vertical direction. The ability of the scanning beam to allow reproduction of electrical signals according to these variations and the capability of the human eye to resolve these distinctly, while viewing the reproduced picture, depends on the total number of lines employed for scanning.

It is possible to arrive at some estimates of the number of lines necessary by considering the bar pattern shown in Fig. (a), where alternate lines are black and white. If the thickness of the scanning beam is equal to the width of each white and black bar, and the number of scanning lines is chosen equal to the number of bars, the electrical information corresponding to the brightness of each bar will be correctly reproduced during the scanning process.

Obviously the greater the number of lines into which the picture is divided in the vertical plane, the better will be the resolution.However, the total number of lines that need be employed is limited by the resolving capability of the human eye at the minimum viewing distance.

The maximum number of alternate light and dark elements (lines) which can be resolved by the eye is given by 1N v = αρ where N v = total number of lines (elements) to be resolved in the vertical direction, α = minimum resolving angle of the eye expressed in radians, and ρ = D/H = viewing-distance/picture height.

For the eye this resolution is determined by the structure of the retina, and the brightness

level of the picture. it has been determined experimently that with reasonable brightness variations and a minimum viewing distance of four times the picture height (D/H = 4), the angle that any two adjacent elements must subtend at the eye for distinct resolution is approximately one minute (1/60 degree). This is illustrated in Fig (b). Substituting these values of α and ρ we get 1 ≈ 860 ( π / 180 × 1 / 60 ) × 4

Thus if the total number of scanning lines is chosen close to 860 and the scanning beam as illustrated in Fig. (a) just passes over each bar (line) separately while scanning all the lines from top to bottom of the picture frame, a distinct pick up of the picture information results and this is the best that can be expected from the system.

This perhaps explains the use of 819 lines in the original French TV system. In practice however, the picture elements are not arranged as equally spaced segments but have random distribution of black, grey and white depending on the nature of the picture details or the scene under consideration.

Statistical analysis and subjective tests carried out to determine the average number of effective lines suggest that about 70 per cent of the total lines or segments get separatel y scanned in the vertical direction and the remaining 30 per cent get merged with other elements due to the beam spot falling equally on two consecutive lines. 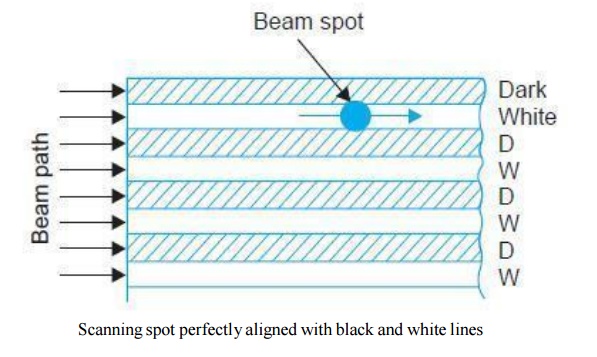 However, there are other factors which also influence the choice of total number of lines in a TV system.

Tests conducted with many observers have shown that though the eye can detect the effective sharpness provided by about 800 scanning lines, but the improvement is not very significant with line numbers greater than 500 while viewing pictures having motion. Also the channel bandwidth increases with increase in number of lines and this not only adds to the cost of the system but also reduces the number of television channels that can be provided in a given VHF or UHF transmission band. 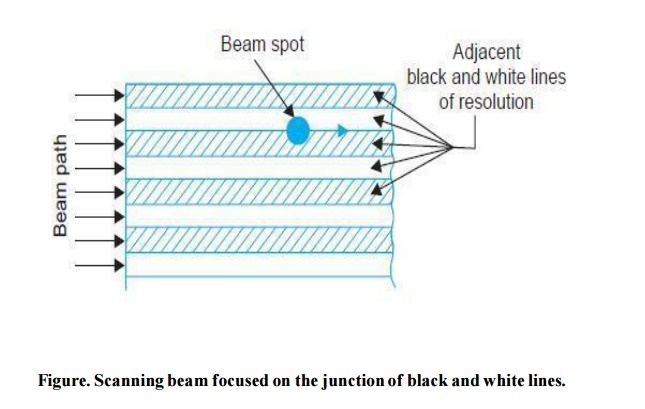