Interlaced scanning. In television pictures an effective rate of 50 vertical scans per second is utilized to reduce flicker. This is accomplished by increasing the downward rate of travel of the scanning electron beam, so that every alternate line gets scanned instead of every successive line.

Interlaced scanning. In television pictures an effective rate of 50 vertical scans per second is utilized to reduce flicker. This is accomplished by increasing the downward rate of travel of the scanning electron beam, so that every alternate line gets scanned instead of every successive line.

Then, when the beam reaches the bottom of the picture frame, it quickly returns to the top to scan those lines that were missed in the previous scanning. Thus the total number of lines are divided into two groups called ‘fields’. Each field is scanned alternately. This method of scanning is known as interlaced scanning and is illustrated in Fig. It reduces flicker to an acceptable level since the area of the screen is covered at twice the rate.

This is like reading alternate lines of a page from top to bottom once and then going back to read the remaining lines down to the bottom.In the 625 lime monochrome system, for successful interlaced scanning, the 625 lines of each frame or picture are divided into sets of 312.5 lines and each set is scanned alternately to cover the entire picture area.

Note that since the beam is now deflected from top to bottom in half the time and the horizontal oscillator is still operating at 15625 Hz, only half the total lines, i.e., 312.5 (625/2 = 312.5) get scanned during each vertical sweep.

Since the first field ends in a half line and the second field commences at middle of the line on the top of the target plate or screen (see Fig), the beam is able to scan the remaining 312.5 alternate lines during its downward journey. In all then, the beam scans 625 lines (312.5 × 2 = 625) per frame at the same rate of 15625 lines (312.5 × 50 = 15625) per second. Therefore, with interlaced scanning the flicker effect is eliminated without increasing the speed of scanning, which in turn does not need any increase in the channel bandwidth. It may be noted that the frame repetition rate of 25 (rather than 24 as used in motion pictures) was chosen to make the field frequency equal to the power line frequency of 50 Hz.

This helps in reducing the undesired effects of hum due to pick up from the mains, because then such effects in the picture stay still, instead of drifting up or down on the screen.

In the American TV system, a field frequency of 60 was adopted because the suppl y frequency is 60 Hz in USA. This brings the total number of lines scanned per second ((525/2) × 60 = 15750) lines to practically the same as in the 625 line system. Scanning periods.

The nominal duration of the horizontal line as shown in Fig. (a)is 64 μs (10 6 /15625 = 64 μs), out of which the active line period is 52 μs and the remaining 12 μs is the line blanking period. The beam returns during this short interval to the extreme left side of the frame to start tracing the next line.

Since the horizontal and vertical sweep oscillators operate continuously to achieve the fast sequence of interlaced scanning, 20 horizontal lines F G 1280 μ s = 20 lines I J get traced during each vertical retrace interval.

Thus 40 scanning H 64 μ s K lines are lost per frame, as blanked lines during the retrace interval of two fields. This leaves the active number of lines, Na , for scanning the picture details equal to 625 – 40 = 585, instead of the 625 lines actually scanned per frame. Scanning sequence.

The complete geometry of the standard interlaced scanning pattern is illustrated in Fig. Note that the lines are numbered in the sequence in which these are actually scanned. During the first vertical trace actually 292.5 lines are scanned. The beam starts at A, and sweeps across the frame with uniform velocity to cover all the picture elements in one horizontal line. At the end of this trace the beam then retraces rapidly to the left side of the frame as shown by the dashed line in the illustration to begin the next horizontal line.

Note that the horizontal lines slope downwards in the direction of scanning because the vertical deflecting current simultaneously produces a vertical scanning motion, which is very slow compared with horizontal scanning. The slope of the horizontal trace from left to right is greater than during retrace from right to left.

The reason is that the faster retrace does not allow the beam so much time to be deflected vertically. After line one, the beam is at the left side ready to scan line 3, omitting the second line.

However, as mentioned earlier it is convenient to number the lines as they are scanned and so the next scanned line skipping one line, is numbered two and not three. This process continues till the last line gets scanned half when the vertical motion reaches the bottom of the raster or frame.

Now the retrace starts and takes a period equal to 20 horizontal line periods to reach the top marked C. 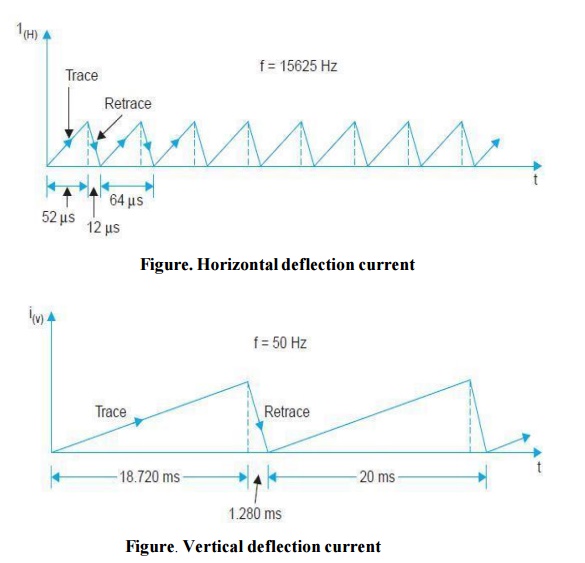 These 20 lines are known as inactive lines, as the scanning beam is cut-off during this period. Thus the second field starts at the middle of the raster and the first line scanned is the 2nd half of line number 313.

The scanning of second field, starting at the middle of the raster automatically enables the beam to scan the alternative lines left un-scanned during the first field. The vertical scanning motion otherwise is exactly the same as in the previous field giving all the horizontal lines the same slope downwards in the direction of scanning.

As a result 292.5 lines again get scanned and the beam reaches the bottom of the frame when it has completed full scanning of line number 605.

The inactive vertical retrace again begins and brings the beam back to the top at point A in a period during which 20 blanked horizontal lines (605 to 625) get scanned. Back at point A, the scanning beam has just completed two fields or one frame and is ready to start the third field covering the same area (no. of lines) as scanned during the first field. This process (of scanning fields) is continued at a fast rate of 50 times a second, which not only creates an illusion of continuity but also solves the problem of flicker satisfactorily.