A complete chart giving line numbers and pulse designations for both the fields (corresponding to Fig) is given below :

A complete chart giving line numbers and pulse designations for both the fields (corresponding to Fig) is given below : 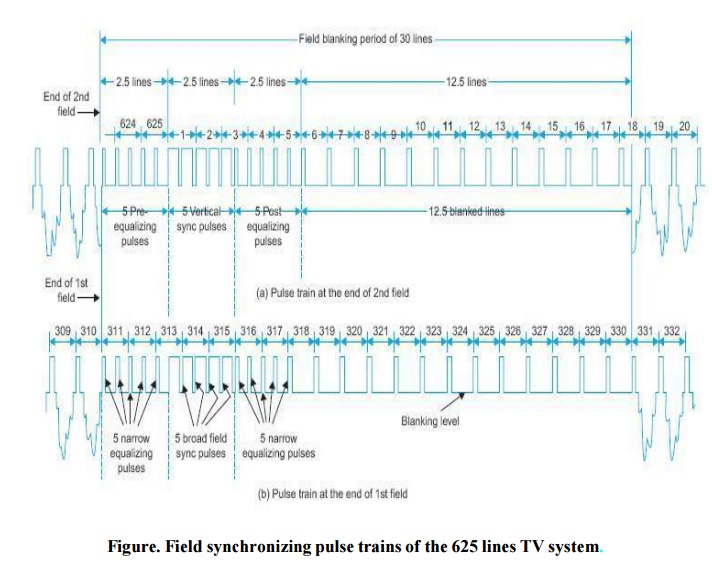 deflection circuity to start the flyback. However, the flyback generall y does not begin with the start of vertical sync because the sync pulse must build up a minimum voltage across the capacitor to trigger the scanning oscillator.

– (4 + 5) =11) lines are blanked at the top of the raster. These lines provide the sweep oscillator enough time to adjust to a linear rise for uniform pick-up and reproduction of the picture.

(a) A suitable field sync pulse is derived for triggering the field oscillator.

(b) The line oscillator continues to receive triggering pulses at correct intervals while the process of initiation and completion of the field time-base stroke is going on.

(d) The vertical sync build up at the receiver has precisely the same shape and timing on odd and even fields.

PREFERENCE OF AM FOR PICTURE SIGNAL TRANSMISSION

At the VHF and UHF carrier frequencies there is a displacement in time between the direct and reflected signals. The distortion which arises due to interference between multiple signals is more objectionable in FM than AM because fhe frequency of the FM signal continuously changes.

If FM were used for picture transmission, the changing best frequency between the multiple paths, delayed with respect to each other, would produce a bar interference pattern in the image with a shimmering effect, since the bars continuously change as the beat frequency

When the intensity of picture brightness causes increase in amplitude of the modulated envelope,it is called ‘positive’ modulation.

When the polarity of modulating video signal is so chosen that sync tips lie at the 100 per cent level of carrier amplitude and increasing brightness produces decrease in the modulation envelope, it is called ‘negative modulation’.

The two polarities of modulation are illustrated in Fig 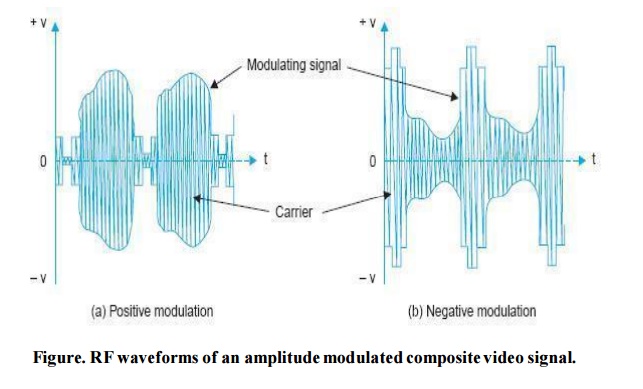 Comparison of Positive and Negative Modulation

Effect of Noise Interference on Picture Signal. Noise pulses created by automobile ignition systems are most troublesome. The RF energy contained in such pulses is spread more or less uniformly over a wide frequency range and has a random distribution of phase and amplitude.

When such RF pulses are added to sidebands of the desired signal, and sum of signal and noise is demodulated, the demodulated video signal contains pulses corresponding to RF noise peaks, which extend principally in the direction of increasing envelope amplitude. This is shown in Fig.

This merit of lesser noise interference on picture information with negative modulation has led to its use in most TV systems. (b) Effect of Noise Interference on Synchronization. Sync pulses with positive modulation being at a lesser level of the modulated carrier envelope are not much affected by noise pulses.

However, in the case of negativel y modulated signal, it is sync pulses which exist at maximum carrier amplitude, and the effect of interference is both to mutilate some of these, and to produce lot of spurious random pulses. This can completely upset the synchronization of the receiver time bases unless something is done about it.

Because of almost universal use of negative modulation, special horizontal stabilizing circuits have been developed for use in receivers to overcome the adverse effect of noise on synchronization. (c) Peak Power Available from the Transmitter. With positive modulation, signal corresponding to white has maximum carrier amplitude.

The RF modulator cannot be driven harder to extract more power because the non-linear distortion thus introduced would affect the amplitude scale of the picture signal and introduce brightness distortion in very bright areas of the picture.

In negative modulation, the transmitter may be over-modulated during the sync pulses without adverse effects, since the non-linear distortion thereby introduced, does not very much affect the shape of sync pulses. Consequently, the negative polarit y of modulation permits a large increase in peak power output and for a given setup in the final transmitter stage the output increases by about 40%. (d) Use of AGC (Automatic Gain Control) Circuits in the Receiver.

Most AGC circuits in receivers measure the peak level of the incoming carrier signal and adjust the gain of the RF and IF amplifiers accordingl y. To perform this measurement simply, a stable reference level must be available in the signal. In negative system of modulation, such a level is the peak of sync pulses which remains fixed at 100 per cent of signal amplitude and is not affected by picture details.

This level may be selected simply by passing the composite video signal through a peak detector. In the positive system of modulation the corresponding stable level is zero amplitude at the carrier and obviously zero is no reference, and it has no relation to the signal strength.

The maximum carrier amplitude in this case depends not onl y on the strength of the signal but also on the nature of picture modulation and hence cannot be utilized to develop true AGC voltage. Accordingly AGC circuits for positive modulation must select some other level (blanking level) and this being at low amplitude needs elaborate circuitry in the receiver. 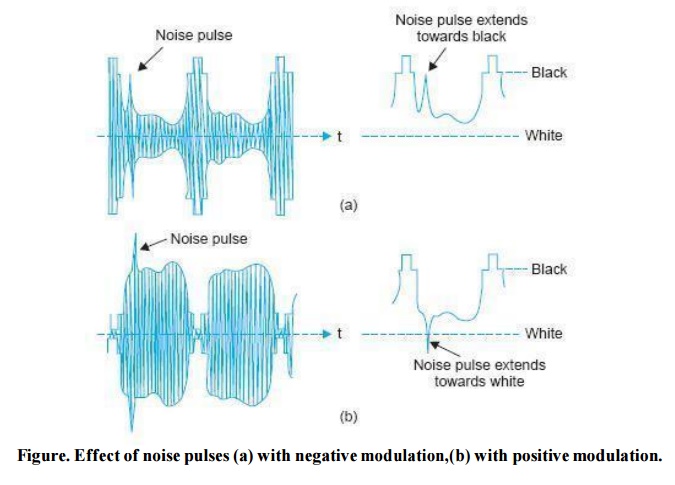