While televising picture elements of the frame by means of the scanning process, it is necessary to present the picture to the eye in such a way that an illusion of continuity is created and any motion in the scene appears on the picture tube screen as a smooth and continuous change.

While televising picture elements of the frame by means of the scanning process, it is necessary to present the picture to the eye in such a way that an illusion of continuity is created and any motion in the scene appears on the picture tube screen as a smooth and continuous change.

To achieve this, advantage is taken of ‘persistence of vision’ or storage characteristics of the human eye. This arises from the fact that the sensation produced when nerves of the eye’s retina are stimulated by incident light does not cease immediately after the light is removed but persists for about 1/16th of a second.

Thus if the scanning rate per second is made greater than sixteen, or the number of pictures shown per second is more than sixteen, the eye is able to integrate the changing levels of brightness in the scene. So when the picture elements are scanned rapidly enough, they appear to the eye as a complete picture unit, with none of the individual elements visible separately.

In present day motion pictures twenty-four still pictures of the scene are taken per second and later projected on the screen at the same rate. Each picture or frame is projected individually as a still picture, but they are shown one after the other in rapid succession to produce the illusion of continuous motion of the scene being shown.

A shutter in the projector rotates in front of the light source and allows the film to be projected on the screen when the film frame is still, but blanks out any light from the screen during the time when the next film frame is being moved into position.

As a result, a rapid succession of still-film frames is seen on the screen. With all light removed during the change from one frame to the next, the eye sees a rapid sequence of still pictures that provides the illusion of continuous motion. Scanning. A similar process is carried out in the television system. 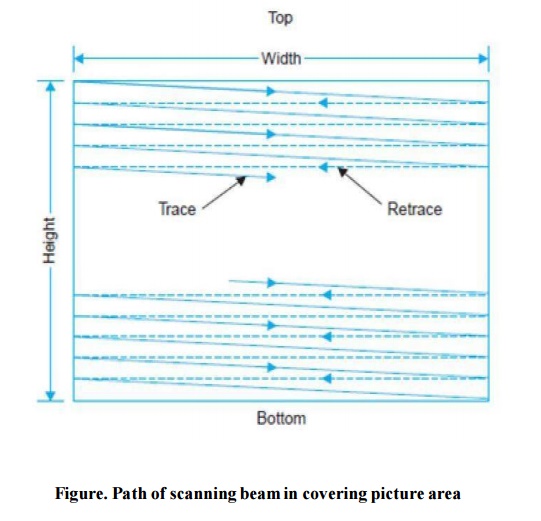 The scene is scanned rapidly both in the horizontal and vertical directions simultaneously to provide sufficient number of complete pictures or frames per second to give the illusion of continuous motion. Instead of the 24 as in commercial motion picture practice, the frame repetition rate is 25 per second in most television systems.

Horizontal scanning. Fig. (a) shows the trace and retrace of several horizontal lines. The linear rise of current in the horizontal deflection coils (Fig. (b)) deflects the beam across the screen with a continuous, uniform motion for the trace from left to right.

At the peak of the rise, the sawtooth wave reverses direction and decreases rapidly to its initial value.

This fast reversal produces the retrace or flyback. The start of the horizontal trace is at the left edge of raster. The finish is at the right edge, where the fl yback produces retrace back to the left edge. Note, that ‘up’ on the sawtooth wave corresponds to horizontal deflection to the right. The heavy lines in Fig. (a) indicate the useful scanning time and the dashed lines correspond to the retrace time.

Vertical scanning. The sawtooth current in the vertical deflection coils (see Fig.) moves the electron beam from top to bottom of the raster at a uniform speed while the electron beam is being deflected horizontally.

Thus the beam produces complete horizontal lines one below the other while moving from top to bottom. As shown in Fig. (c), the trace part of the sawtooth wave for vertical scanning deflects the beam to the bottom of the raster. Then the rapid vertical retrace returns the beam to the top.

Note that the maximum amplitude of the vertical sweep current brings the beam to the bottom of the raster. As shown in Fig. (b) during vertical retrace the horizontal scanning continues and several lines get scanned during this period. Because of motion in the scene being televised, the information or brightness at the top of the target plate or picture tube screen normally changes by the time the beam returns to the top to recommence the whole process.

This information is picked up during the next scanning cycle and the whole process is repeated 25 times to cause an illusion of continuity. The actual scanning sequence is however a little more complex than that just described and is explained in a later section of this chapter. It must however be noted, that both during horizontal retrace and vertical retrace intervals the scanning beams at the camera tube and picture tube are blanked and no picture information is either picked up or reproduced.

Instead, on a time division basis, these short retrace intervals are utilized for transmitting distinct narrow pulses to keep the sweep oscillators of the picture tube deflection circuits of the receiver in synchronism with those of the camera at the transmitter.

This ensures exact correspondence in scanning at the two ends and results in distortion less reproduction of the picture details.