Crystals are classified into the following four types depending upon the nature of the units which occupy the lattice points. 1. Molecular Crystals 2. Covalent Crystals 3. Metallic Crystals 4. Ionic Crystals

Crystals are classified into the following four types depending upon the

nature of the units which occupy the lattice points.

The lattice in covalent crystals consists of atoms linked together by a continuous system of covalent bonds. Diamond is a good example for this type.

In ionic crystals, the units occupying lattice points are positive and negative ions. Each ion of a given sign is held by coulombic forces of attraction to all ions of opposite sign. The forces are very strong. The ionic crystals have the following

ii.            The vapour pressure of ionic crystals at ordinary temperature are very low.

vi.            Ionic crystals are soluble in water and also in other polar solvents. Ionic solids are good conductors when dissolved in water.

Substance of the general formula AB mostly crystallise in one of the following six forms. 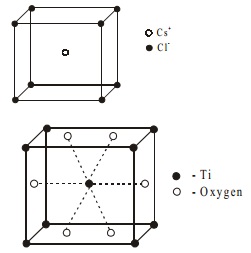 Thus number of CsCl units per unit cell is one.

Compounds having the general formula AB2 generally crystallise in forms based on the following eight typical lattices like CO2, SiO2, TiO2, CaF2, Cu2O, FeS2, CdI2 and MoS2. For example Rutile (TiO2) has the following structure.