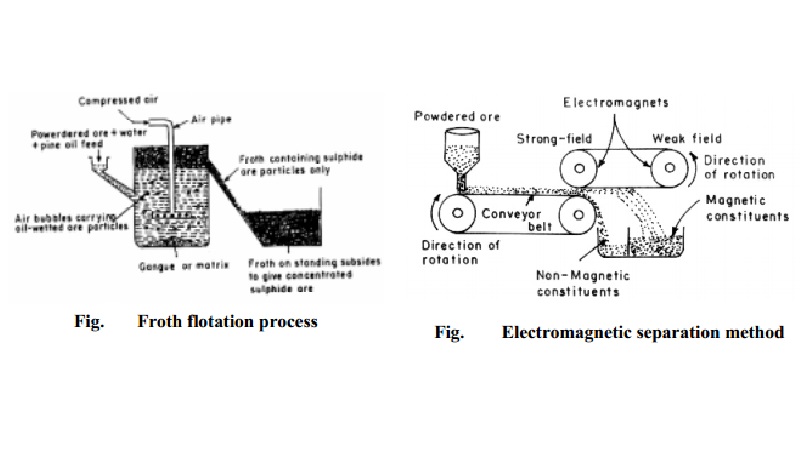 The ore is generally associated with rock impurities like clay, sand etc. called ' gangue or matrix'. The purification of ore means removal of gangue from the powdered ore.

The ore is generally associated with rock impurities like clay, sand etc. called ' gangue or matrix'. The purification of ore means removal of gangue from the powdered ore. This process is otherwise called concentration of the ore or ore dressing. Thus, the percentage of the ore in the concentrated ore is higher than that in the original ore. The purification or concentration of ore can be brought about in the following ways, depending upon the type of ore.

This method is especially suitable for heavy 'oxide' ores like haematite, tinstone, etc. In this, the powdered ore is placed on a sloping floor (or platform) and washed by directing on it a strong current of water. The lighter sandy, and earthy impurities are washed away; while the heavier ore particles are left behind.

This method is especially suitable for sulphide ores like zinc blende (ZnS), and copper pyrites (CuFeS2). This process is based on the fact that the sulphide ore particles are only moistened by oil; while those of oxide, and gangue particles are moistened only by water. In this process, the powdered ore is mixed with water and a little pine oil (a foaming agent) and the whole mixture is then stirred vigorously by blowing compressed air. The oil forms a foam (or froth) with air. The ore particles stick to the froth, which rises to the surface; while the rocky, and earthy impurities (gangue) are left in water Fig.. The froth is skimmed off, collected, and allowed to subside to get concentrated ore.

This method is employed in case where the ore is to be in a very pureform, e.g., aluminium extraction. Bauxite (Al2O3), an ore of aluminium, contains SiO2 and Fe2O3 as impurities. When bauxite ore is treated with NaOH, the Al2O3 goes into solution as sodium meta-aluminate leaving behind the undissolved impurities [Fe2O3, SiO2, Fe(OH)3,etc.], which are then filtered off.

The filtrate (containing sodium meta-aluminate) on dilution, and stirring gives a precipitate of aluminium hydroxide, which is filtered, and ignited to get pure alumina.