One way to enhance the ability of a system to defend against intruders and malicious programs is to implement trusted system technology.

Following successful logon, the user has been granted access to one or set of hosts and applications. This is generally not sufficient for a system that includes sensitive data in its database. Through the user access control procedure, a user can be identified to the system. Associated with each user, there can be a profile that specifies permissible operations and file accesses. The operating system can then enforce rules based on the user profile. The database management system, however, must control access to specific records or even portions of records. The operating system may grant a user permission to access a file or use an application, following which there are no further security checks, the database management system must make a decision on each individual access attempt. That decision will depend not only on the user‟s identity but also on the specific parts of the data being accessed and even on the information already divulged to the user.

A general model of access control as exercised by an file or database management system is that of an access matrix. The basic elements of the model are as follows:

·        Subject: An entity capable of accessing objects. Generally, the concept of subject equates with that of process.

·         Object: Anything to which access is controlled. Examples include files, portion of files, programs, and segments of memory.

·        Access right: The way in which the object is accessed by a subject. Examples are   read, write and execute. 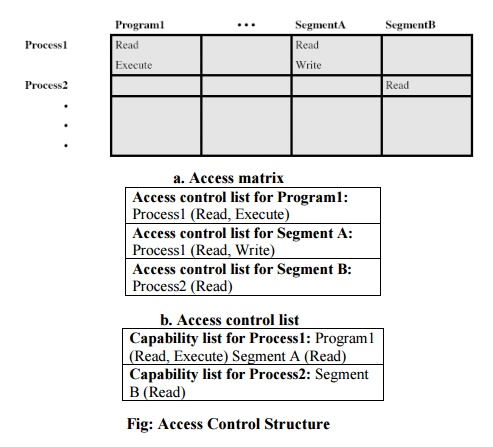 Decomposition by rows yields capability tickets. A capability ticket specifies authorized objects and operations for a user. Each user has a number of tickets and may be authorized to loan or give them to others. Because tickets may be dispersed around the system, they present a greater security problem than access control lists. In particular, the ticket must be unforgeable. One way to accomplish this is to have the operating system hold all tickets on behalf of users. These tickets would have to be held in a region of memory inaccessible to users.

2. The concept of Trusted Systems

·        No read up: A subject can only read an object of less or equal security level. This is referred to as simple security property.

·        No write down: A subject can only write into an object of greater or equal security level. 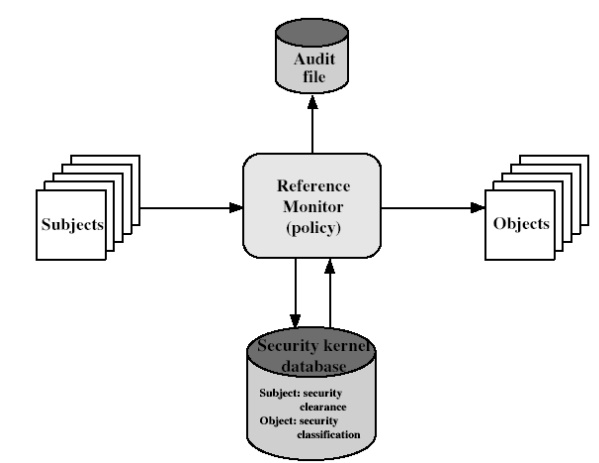 This is referred to as *-property (star property).

Complete  mediation:  The  security  rules  are  enforced  on  every  access,  not  just,  for example, when a file is opened.

Isolation:  The  reference  monitor  and  database  are  protected  from  unauthorised modification.

Verifiability: The reference monitor‟s correctness must be provable. That is, it  must be possible to demonstrate mathematically that the reference monitor enforces the security rules and provides complete mediation and isolation. Important security events, such as detected security violations and authorized changes to the security kernel database, are stored in the audit file 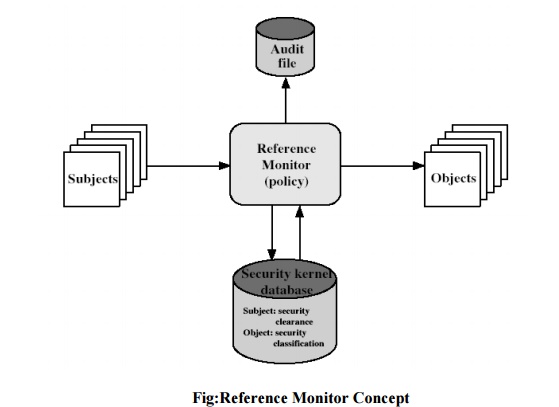