Virtually, all symmetric block encryption algorithms in current use are based on a structure referred to as Fiestel block cipher. For that reason, it is important to examine the design principles of the Fiestel cipher. We begin with a comparison of stream cipher with block

A stream cipher is one that encrypts a digital data stream one bit or one byte at a time. E.g, vigenere cipher. A block cipher is one in which a block of plaintext is treated as a whole and used to produce a cipher text block of equal length. Typically a block size of 64 or 128 bits is used.

most symmetric block ciphers are based on a Feistel Cipher Structure

would need table of 264 entries for a 64-bit block

instead create from smaller building blocks

S-P networks are based on the two primitive cryptographic operations we have seen before:

provide confusion and diffusion of message

diffusion – dissipates statistical structure of plaintext over bulk of ciphertext

confusion – makes relationship between ciphertext and key as complex as possible

The input to the encryption algorithm are a plaintext block of length 2w bits and a key K. the plaintext block is divided into two halves L0 and R0. The two halves of the data pass through „n‟ rounds of processing and then combine to produce the ciphertext block. Each round „i‟ has inputs Li-1 and Ri-1, derived from the previous round, as well as the subkey Ki, derived from the overall key K. in general, the subkeys Ki are different from K and from each other.

The exact realization of a Feistel network depends on the choice of the following parameters and design features:

Fast software en/decryption & ease of analysis - are more recent concerns for practical use and testing.

The process of decryption is essentially the same as the encryption process. The rule is as follows: use the cipher text as input to the algorithm, but use the subkey ki in reverse order. i.e., kn in the first round, kn-1 in second round and so on. For clarity, we use the notation LEi and REi for data traveling through the decryption algorithm. The diagram below indicates that, at each round, the intermediate value of the decryption process is same (equal) to the corresponding value of the encryption process with two halves of the value swapped. 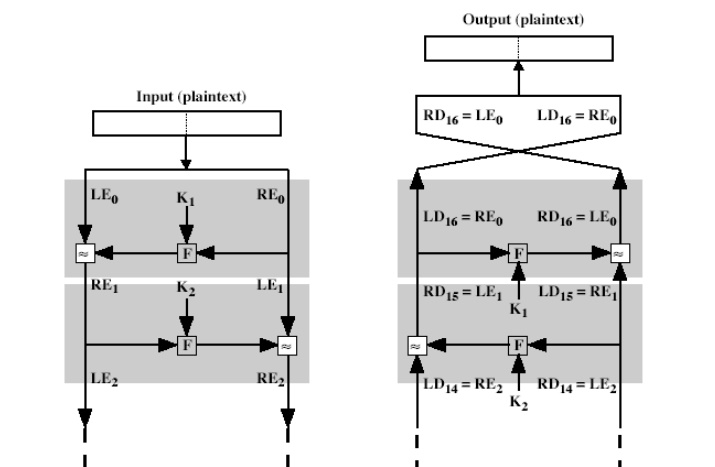 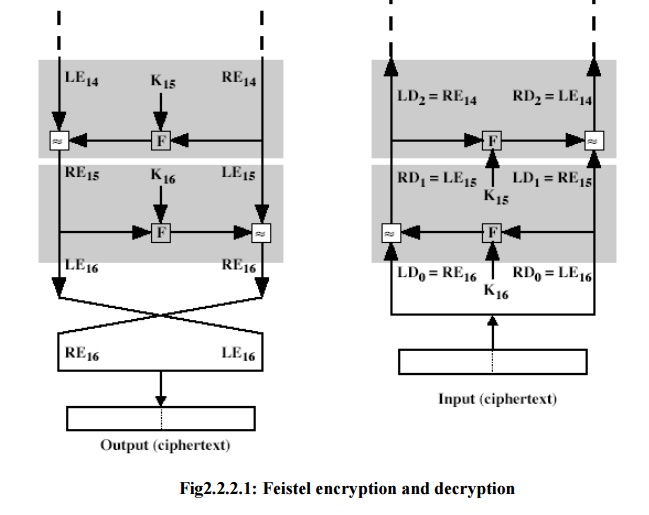 In general, for the ith iteration of the encryption algorithm,

Finally, the output of the last round of the decryption process is RE0 || LE0. A 32-bit swap recovers the original plaintext.