Group: A set of elements that is closed with respect to some operation.

Closed-> The result of the operation is also in the set

Abelian Group: The operation is commutative

Cyclic Group: Every element is a power of some fixed element, i.e., b = ak for some a and every b in group a is said to be a generator of the group

A group with two operations: addition and multiplication

The group is abelian with respect to addition: a+b=b+a

Multiplication and additions are both associative:

Integral Domain: Multiplication operation has an identity and no zero divisors

An integral domain in which each element has a multiplicative inverse. 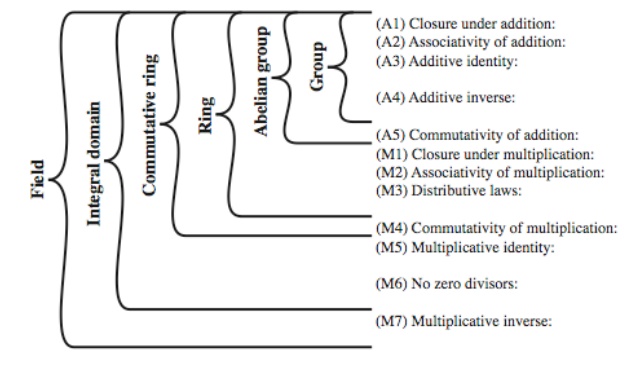 the greatest common divisor (a,b) of a and b is the largest number that divides evenly into both a and b

Euclid's Algorithm is used to find the Greatest Common Divisor (GCD) of two numbers a and n, a<n

Finite Field: A field with finite number of elements

The number of elements is always a power of a prime number. Hence, denoted as GF(pn)

Can do addition, subtraction, multiplication, and division without leaving the field GF(p)

Some polynomials have no factors and are prime.

can interpret r(x) as being a remainder

Can use Euclid‟s algorithm to find gcd and inverses.