The concept of public key cryptography evolved from an attempt to attack two of themost difficult problems associated with symmetric encryption.

The concept of public key cryptography evolved from an attempt to attack two of themost difficult problems associated with symmetric encryption.

·        Key distribution under symmetric key encryption requires either (1) that two communicants already share a key, which someone has been distributed to them or (2) the use of a key distribution center.

Public key algorithms rely on one key for encryption and a different but related key for decryption.

These algorithms have the following important characteristics:

·        It is computationally infeasible to determine the decryption key given only the knowledge of the cryptographic algorithm and the encryption key.

In addition, some algorithms, such as RSA, also exhibit the following characteristic:

·     Either of the two related keys can be used for encryption, with the other used for decryption.

The essential steps are the following:

·        Each user generates a pair of keys to be used for encryption and decryption of messages.

·        Each user places one of the two keys in a public register or other accessible file. This is the public key. The companion key is kept private.

·        If A wishes to send a confidential message to B, A encrypts the message using B‟s public key.

With this approach, all participants have access to public keys and private keys are generated locally by each participant and therefore, need not be distributed. As long as a system controls its private key, its incoming communication is secure.

Let the plaintext be X=[X1, X2, X3, …,Xm] where m is the number of letters in some finite alphabets. Suppose A wishes to send a message to B. B generates a pair of keys: a public key KUb and a private key KRb. KRb is known only to B, whereas KUb is publicly available and therefore accessible by A.

With the message X and encryption key KUb as input, A forms the cipher text

The receiver can decrypt it using the private key KRb. i.e., X=D KRb(). The encrypted message serves as a digital signature.

It is important to emphasize that the encryption process just described does not provide confidentiality. There is no protection of confidentiality because any observer can decrypt the message by using the sender‟s public key.

It is however, possible to provide both the authentication and confidentiality by a double use of the public scheme. 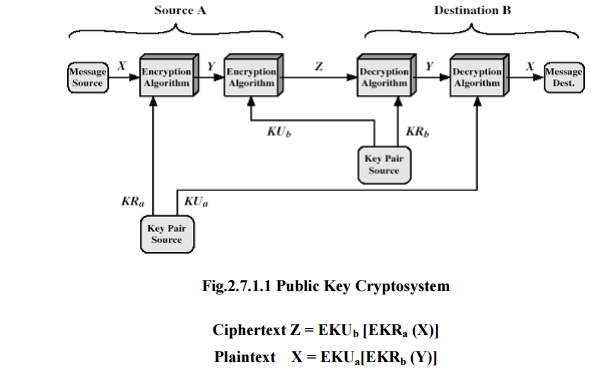 Initially, the message is encrypted using the sender‟s private key. This provides the digital signature. Next, we encrypt again, using the receiver‟s public key. The final ciphertext can be decrypted only by the intended receiver, who alone has the matching private key. Thus confidentiality is provided.

It is computationally easy for a party B to generate a pair [KUb , KRb].

It is computationally easy for a sender A, knowing the public key and the message to be encrypted M, to generate the corresponding ciphertext: C=EKUb(M).

It is computationally easy for the receiver B to decrypt the resulting ciphertext using the private key to recover the original message: M = DKRb (C) = DKRb [EKUb (M)]

It is computationally infeasible for an opponent, knowing the public key KUb, to determine the private key KRb.

It is computationally infeasible for an opponent, knowing the public key KUb, and a ciphertext C, to recover the original message M.

The encryption and decryption functions can be applied in either order:   M = EKUb [DKRb (M) = DKUb [EKRb (M)]

Public key encryption scheme is vulnerable to a brute force attack. The counter measure is to use large keys.