all classical encryption algorithms are private-key

key - info used in cipher known only to sender/receiver

cryptology - the field of both cryptography and cryptanalysis 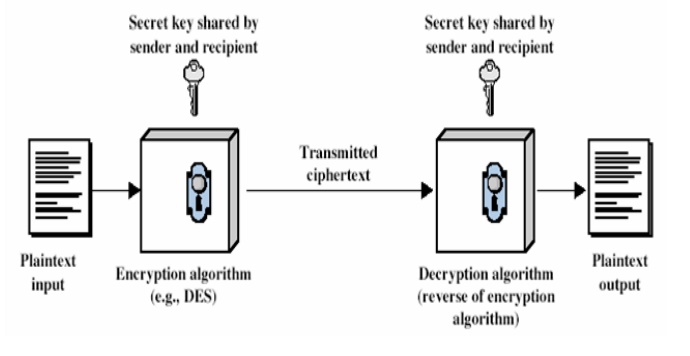 Here the original message, referred to as plaintext, is converted into apparently random nonsense, referred to as cipher text. The encryption process consists of an algorithm and a key. The key is a value independent of the plaintext. Changing the key changes the output of the algorithm. Once the cipher text is produced, it may be transmitted. Upon reception, the cipher text can be transformed back to the original plaintext by using a decryption algorithm and the same key that was used for encryption.

Two requirements for secure use of symmetric encryption:

a secret key known only to sender / receiver 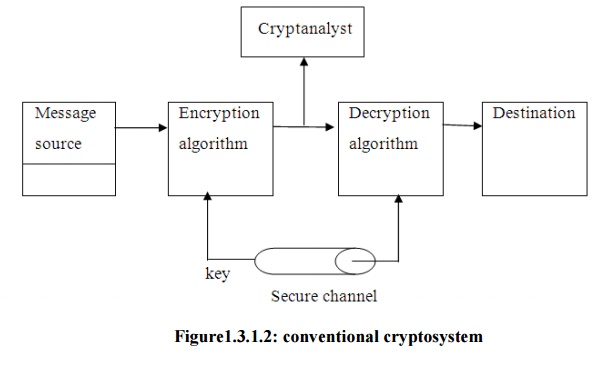 A source produces a message in plaintext, X = [X1, X2, … , XM] where M are the number of letters in the message. A key of the form K = [K1, K2, …, KJ] is generated. If the key is generated at the source, then it must be provided to the destination by means of some secure channel.

The intended receiver, in possession of the key, is able to invert the transformation: X = DK(Y)

The number of keys used

If the sender and receiver uses same key then it is said to be symmetric key (or) single key (or) conventional encryption.

If the sender and receiver use different keys then it is said to be public key encryption.

The way in which the plain text is processed

A block cipher processes the input and block of elements at a time, producing output block for each input block.

A stream cipher processes the input elements continuously, producing output element one at a time, as it goes along.

information known to the cryptanalyst.

Cipher text only – A copy of cipher text alone is known to the cryptanalyst.

Known plaintext – The cryptanalyst has a copy of the cipher text and the corresponding plaintext.

Chosen plaintext – The cryptanalysts gains temporary access to the encryption machine. They cannot open it to find the key, however; they can encrypt a large number of suitably chosen plaintexts and try to use the resulting cipher texts to deduce the key.

Chosen cipher text – The cryptanalyst obtains temporary access to the decryption machine, uses it to decrypt several string of symbols, and tries to use the results to deduce the key.

A plaintext message may be hidden in any one of the two ways. The methods of steganography conceal the existence of the message, whereas the methods of cryptography render the message unintelligible to outsiders by various transformations of the text.

A simple form of steganography, but one that is time consuming to construct is one in which an arrangement of words or letters within an apparently innocuous text spells out the real message.

the sequence of first letters of each word of the overall message spells out the real (hidden) message.

Subset of the words of the overall message is used to convey the hidden message. Various other techniques have been used historically, some of them are:

Character marking – selected letters of printed or typewritten text are overwritten in pencil. The marks are ordinarily not visible unless the paper is held to an angle to bright light.

Invisible ink – a number of substances can be used for writing but leave no visible trace until heat or some chemical is applied to the paper.

Pin punctures – small pin punctures on selected letters are ordinarily not visible unless the paper is held in front of the light.

Typewritten correction ribbon – used between the lines typed with a black ribbon, the results of typing with the correction tape are visible only under a strong light.

Requires a lot of overhead to hide a relatively few bits of information.

Once the system is discovered, it becomes virtually worthless.