There are two basic building blocks of all encryption techniques: substitution and transposition.

The earliest known use of a substitution cipher and the simplest was by Julius Caesar. The Caesar cipher involves replacing each letter of the alphabet with the letter standing 3 places further down the alphabet.

Note that the alphabet is wrapped around, so that letter following „z‟ is „a‟. For each plaintext letter p, substitute the cipher text letter c such that C =

The best known multiple letter encryption cipher is the playfair, which treats digrams in the plaintext as single units and translates these units into cipher text digrams. The playfair algorithm is based on the use of 5x5 matrix of letters constructed using a keyword. Let the keyword be „monarchy‟. The matrix is constructed by filling in the letters of the keyword (minus duplicates) from left to right and from top to bottom, and then filling in the remainder of the matrix with the remaining letters in alphabetical order.

The letter „i‟ and „j‟ count as one letter. Plaintext is encrypted two letters at a time according to the following rules:

Repeating plaintext letters that would fall in the same pair are separated with a filler letter such as „x‟.

Plaintext letters that fall in the same row of the matrix are each replaced by the letter to the right, with the first element of the row following the last.

Plaintext letters that fall in the same column are replaced by the letter beneath, with the top element of the column following the last. 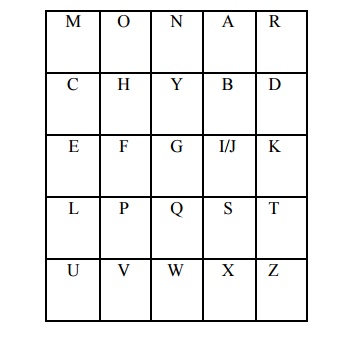 Plaintext = meet me at the school house

Since there are 26 letters, 26x26 = 676 diagrams are possible, so identification of individual digram is more difficult.

Frequency analysis is much more difficult.

Another way to improve on the simple monoalphabetic technique is to use different monoalphabetic substitutions as one proceeds through the plaintext message. The general name for this approach is polyalphabetic cipher. All the techniques have the following features in common.

A set of related monoalphabetic substitution rules are used

A key determines which particular rule is chosen for a given transformation.

In this scheme, the set of related monoalphabetic substitution rules consisting of 26 caesar ciphers with shifts of 0 through 25. Each cipher is denoted by a key letter. e.g.,

Caesar cipher with a shift of 3 is denoted by the key value 'd‟ (since a=0, b=1, c=2 and so on). To aid in understanding the scheme, a matrix known as vigenere tableau is constructed.

Each of the 26 ciphers is laid out horizontally, with the key letter for each cipher to its left. A normal alphabet for the plaintext runs across the top. The process of encryption is simple: Given a key letter X and a plaintext letter y, the cipher text is at the intersection of the row labeled x and the column labeled y; in this case, the ciphertext is V.

To encrypt a message, a key is needed that is as long as the message. Usually, the key is a repeating keyword. 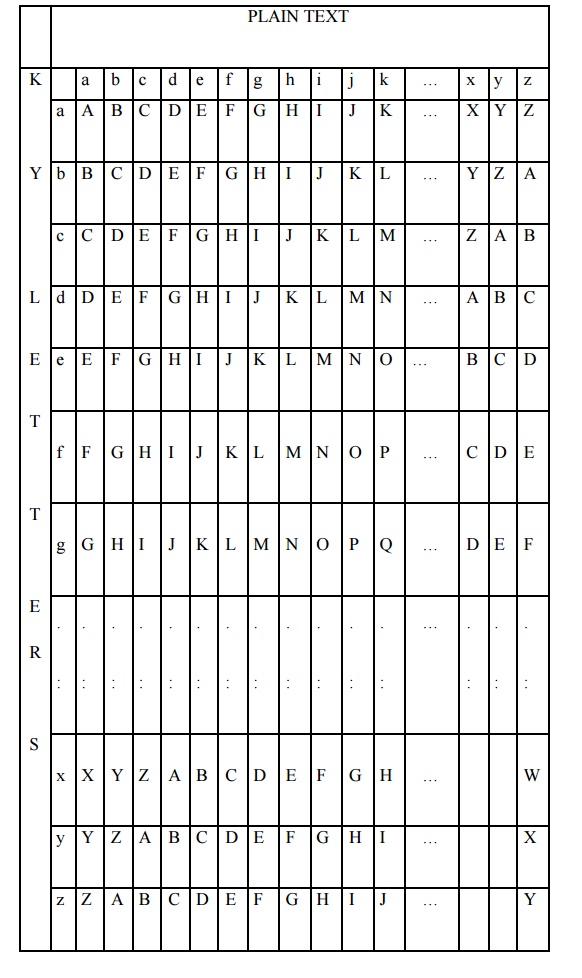 Decryption is equally simple. The key letter again identifies the row. The position of the cipher text letter in that row determines the column, and the plaintext letter is at the top of that column.

There are multiple ciphertext letters for each plaintext letter

It is an unbreakable cryptosystem. It represents the message as a sequence of 0s and 1s. this can be accomplished by writing all numbers in binary, for example, or by using ASCII. The key is a random sequence of 0‟s and 1‟s of same length as the message.

Once a key is used, it is discarded and never used again. The system can be expressed as follows:

Thus the cipher text is generated by performing the bitwise XOR of the plaintext and the key. Decryption uses the same key. Because of the properties of XOR, decryption simply involves the same bitwise operation:

Encryption method is completely unbreakable for a ciphertext only attack.

Once a key is used, it is dangerous to reuse it for a second message; any knowledge on the first message would give knowledge of the second.

All the techniques examined so far involve the substitution of a cipher text symbol for a plaintext symbol. A very different kind of mapping is achieved by performing some sort of permutation on the plaintext letters. This technique is referred to as a transposition cipher.

Plaintext     = meet at the school house

To encipher this message with a rail fence of depth 2, we write the message as follows:

The encrypted message is

Row Transposition Ciphers-A more complex scheme is to write the message in a rectangle, row by row, and read the message off, column by column, but permute the order of the columns. The order of columns then becomes the key of the algorithm.