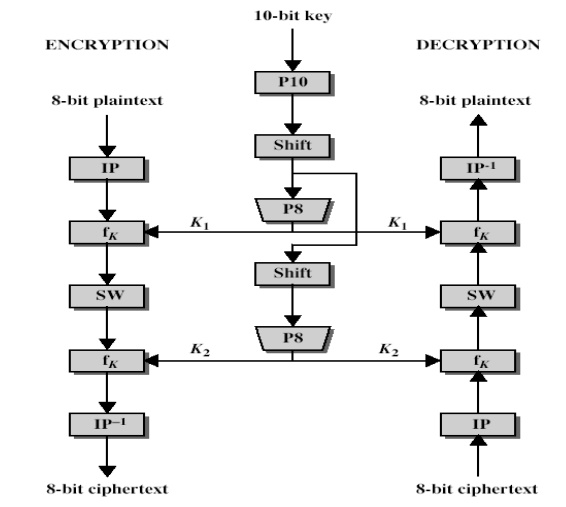 a complex function labeled fk, which involves both permutation and substitution operations and depends on a key input

a permutation function that is the inverse of the initial permutation

The function fk takes as input not only the data passing through the encryption algorithm, but also an 8-bit key. Here a 10-bit key is used from which two 8-bit subkeys are generated. The key is first subjected to a permutation (P10). Then a shift operation is performed. The output of the shift operation then passes through a permutation function that produces an 8-bit output (P8) for the first subkey (K1). The output of the shift operation also feeds into another shift and another instance of P8 to produce the second subkey (K2).

Which can also be written as

Decryption can be shown as 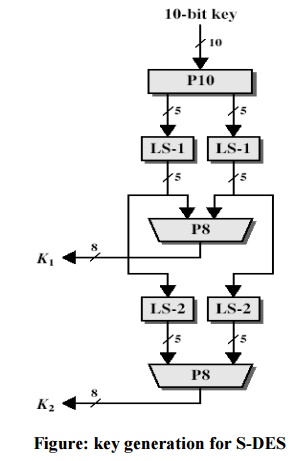 S-DES depends on the use of a 10-bit key shared between sender and receiver. From this key, two 8-bit subkeys are produced for use in particular stages of the encryption and decryption algorithm. First, permute the key in the following fashion. Let the 10-bit key be designated as (k1, K2, k3, k4, k5, k6, k7, k8, k9, k10). Then the permutation P10 is defined as:

This table is read from left to right; each position in the table gives the identity of the input bit that produces the output bit in that position. So the first output bit is bit 3 of the input; the second output bit is bit 5 of the input, and so on. For example, the key (1010000010) is permuted to (10000 01100). Next, perform a circular left shift (LS-1), or rotation, separately on the first five bits and the second five bits. In our example, the result is (00001 11000). Next we apply P8, which picks out and permutes 8 of the 10 bits according to the following rule:

The input to the algorithm is an 8-bit block of plaintext, which we first permute using the IP function:

This retains all 8 bits of the plaintext but mixes them up.

At the end of the algorithm, the inverse permutation is used:

The most complex component of S-DES is the function fk, which consists of a combination of permutation and substitution functions. The functions can be expressed as follows. Let L and R be the leftmost 4 bits and rightmost 4 bits of the 8-bit input to f K, and let F be a mapping (not necessarily one to one) from 4-bit strings to 4-bit strings. Then we let

We now describe the mapping F. The input is a 4-bit number (n1 n2 n3 n4). The first operation is an expansion/permutation operation:

It is clearer to depict the result in this fashion:

These two boxes are defined as follows:

The function f K only alters the leftmost 4 bits of the input. The switch function (SW) interchanges the left and right 4 bits so that the second instance of f K operates on a different 4 bits. In this second instance, the E/P, S0, S1, and P4 functions are the same. The key input is K2. Finally apply inverse permutation to get the ciphertext.