1. The RSA algorithm 2. Security of RSA

It was developed by Rivest, Shamir and Adleman. This algorithm makes use of an expression with exponentials. Plaintext is encrypted in blocks, with each block having a binary value less than some number n. That is, the block size must be less than or equal to log2 (n); in practice, the block size is k-bits, where 2k < n < 2k+1. Encryption and decryption are of the following form, for some plaintext block M and ciphertext block C:

Let us focus on the first requirement. We need to find the relationship of the form:

A corollary to Euler‟s theorem fits t0068e bill: Given two prime numbers p and q and two integers, n and m, such that n=pq and 0<m<n, and arbitrary integer k, the following relationship holds

where Ф(n) – Euler totient function, which is the number of positive integers less than n and relatively prime to n. we can achieve the desired relationship, if ed=kФ(n)+1

This is equivalent to saying:

That is, e and d are multiplicative inverses mod Ф(n). According to the rule of modular arithmetic, this is true only if d (and therefore e) is relatively prime to Ф(n). Equivalently,

The steps involved in RSA algorithm for generating the key are 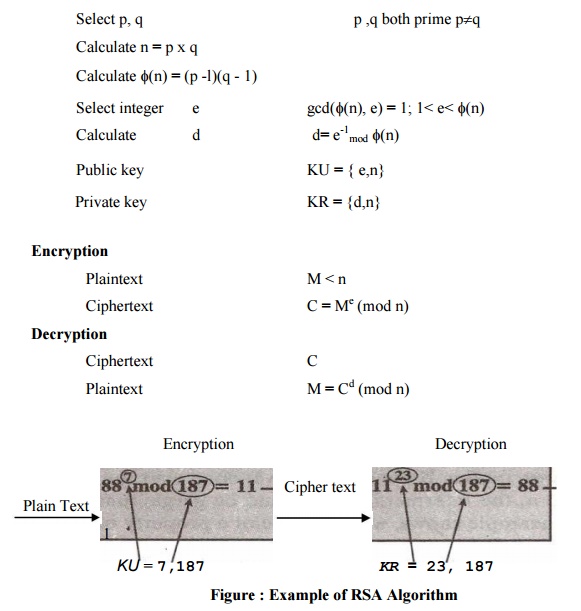 There are three approaches to attack the RSA:

·        mathematical attacks (based on difficulty of computing ø(N), by factoring modulus N)

·        Determine Ф(n)directly without determining p and q and find d.

It has been proved that the opponent can determine a private key by keeping track of how long a computer takes to decipher messages. Although the timing attack is a serious threat, there are simple countermeasures that can be used:

·        Random delay – better performance could be achieved by adding a random delay to the exponentiation algorithm to confuse the timing attack.

·        Blinding – multiply the ciphertext by a random number before performing exponentiation.