The purpose of the algorithm is to enable two users to exchange a key securely that can then be used for subsequent encryption of messages.

The purpose of the algorithm is to enable two users to exchange a key securely that can then be used for subsequent encryption of messages.

The exponent „i‟ is referred to as discrete logarithm. With this background, we can define Diffie

XB  mod q. Each side keeps the X value private and makes the Y value available publicly to the

The result is that two sides have exchanged a secret key.

The security of the algorithm lies in the fact that, while it is relatively easy to calculate exponentials modulo a prime, it is very difficult to calculate discrete logarithms. For large primes, the latter task is considered infeasible. 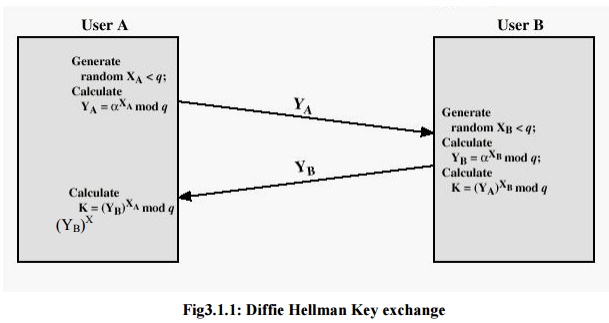 The protocol depicted in figure is insecure against a man-in-the-middle attack. Suppose Alice and Bob wish to exchange keys, and Darth is the adversary. The attack proceeds as follows:

Darth prepares for the attack by generating two random private keys XD1 and XD2 and then computing the corresponding public keys YD1 and YD2.

Alice transmits YA to Bob.

All future communication between Bob and Alice is compromised in the following way:

Darth intercepts the encrypted message and decrypts it, to recover M.

Darth sends Bob E(K1, M) or E(K1, M'), where M' is any message. In the first case, Darth simply wants to eavesdrop on the communication without altering it.

In the second case, Darth wants to modify the message going to Bob. The key exchange protocol is vulnerable to such an attack because it does not authenticate the participants. This vulnerability can be overcome with the use of digital signatures and public-key certificates.

Key exchange using elliptic curves can be done in the following manner. First pick a large integer q, which is either a prime number p or an integer of the form 2m and elliptic curve parameters a and b. This defines the elliptic group of points Eq(a, b). Next, pick a base point G = (x1, y1) in Ep(a, b) whose order is a very large value n. The order n of a point G on an elliptic curve is the smallest positive integer n such that nG = O. Eq(a, b) and G are parameters of the cryptosystem known to all participants.

A selects an integer nA less than n. This is A's private key. A then generates a public key PA = nA x G; the public key is a point in Eq(a, b).

B similarly selects a private key nB and computes a public key PB.