Perhaps the most sophisticated types of threats to computer systems are presented by programs that exploit vulnerabilities in computing systems.

Perhaps the most sophisticated types of threats to computer systems are presented by programs that exploit vulnerabilities in computing systems. 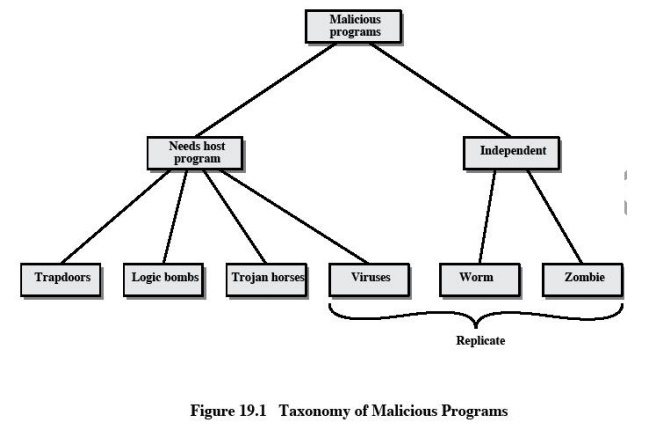 Malicious software can be divided into two categories:

those that need a host program, and those that are independent.

The former are essentially fragments of programs that cannot exist independently of some actual application program, utility, or system program. Viruses, logic bombs, and backdoors are examples. The latter are self-contained programs that can be scheduled and run by the operating system. Worms and zombie programs are examples. 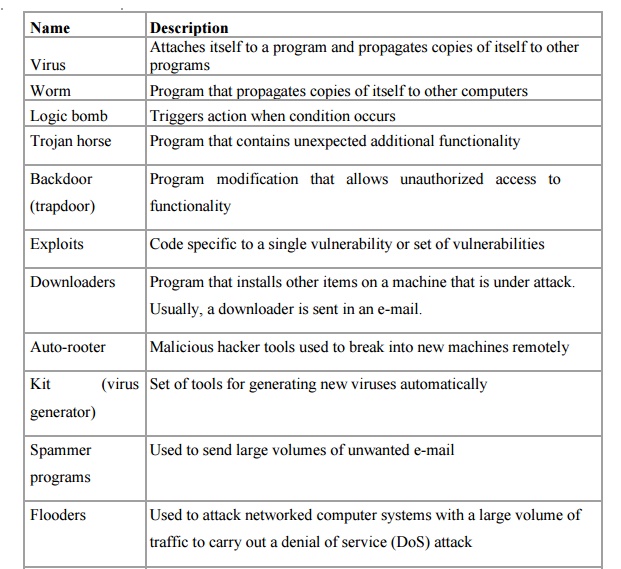 2. The Nature of Viruses

A virus is a piece of software that can "infect" other programs by modifying them; the modification includes a copy of the virus program, which can then go on to infect other programs.

A virus can do anything that other programs do. The only difference is that it attaches itself to another program and executes secretly when the host program is run. Once a virus is executing, it can perform any function, such as erasing files and programs.

During its lifetime, a typical virus goes through the following four phases:

·        Dormant phase: The virus is idle. The virus will eventually be activated by some event, such as a date, the presence of another program or file, or the capacity of the disk exceeding some limit. Not all viruses have this stage.

·        Propagation phase: The virus places an identical copy of itself into other programs or into certain system areas on the disk. Each infected program will now contain a clone of the virus, which will itself enter a propagation phase.

·        Triggering phase: The virus is activated to perform the function for which it was intended. As with the dormant phase, the triggering phase can be caused by a variety of system events, including a count of the number of times that this copy of the virus has made copies of itself.

·        Execution phase: The function is performed. The function may be harmless, such as a message on the screen, or damaging, such as the destruction of programs and data files.

A virus can be prepended or postpended to an executable program, or it can be embedded in some other fashion. The key to its operation is that the infected program, when invoked, will first execute the virus code and then execute the original code of the program.

An infected program begins with the virus code and works as follows.

The first line of code is a jump to the main virus program. The second line is a special marker that is used by the virus to determine whether or not a potential victim program has already been infected with this virus.

When the program is invoked, control is immediately transferred to the main virus program. The virus program first seeks out uninfected executable files and infects them. Next, the virus may perform some action, usually detrimental to the system.

This action could be performed every time the program is invoked, or it could be a logic bomb that triggers only under certain conditions.

Finally, the virus transfers control to the original program. If the infection phase of the program is reasonably rapid, a user is unlikely to notice any difference between the execution of an infected and uninfected program.

A virus such as the one just described is easily detected because an infected version of a program is longer than the corresponding uninfected one. A way to thwart such a simple means of detecting a virus is to compress the executable file so that both the infected and uninfected versions are of identical length.. The key lines in this virus are numbered. We assume that program P1 is infected with the virus CV. When this program is invoked, control passes to its virus, which performs the following steps:

1.     For each uninfected file P2 that is found, the virus first compresses that file to produce P'2, which is shorter than the original program by the size of the virus.

2.     A copy of the virus is prepended to the compressed program.

3.     The compressed version of the original infected program, P'1, is uncompressed.

4.     The uncompressed original program is executed. 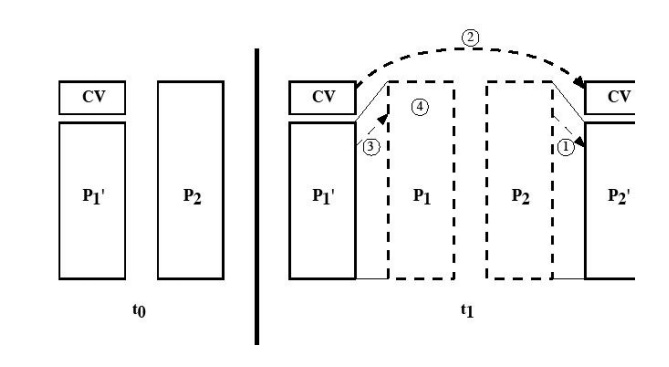 Once a virus has gained entry to a system by infecting a single program, it is in a position to infect some or all other executable files on that system when the infected program executes. Thus, viral infection can be completely prevented by preventing the virus from gaining entry in the first place. Unfortunately, prevention is extraordinarily difficult because a virus can be part of any program outside a system. Thus, unless one is content to take an absolutely bare piece of iron and write all one's own system and application programs, one is vulnerable.