One potential problem with expert systems is the number of comparisons that need to be made between rules and facts in the database.

One potential problem with expert systems is the number of comparisons that need to be made between rules and facts in the database.

In some cases, where there are hundreds or even thousands of rules, running comparisons against each rule can be impractical.

The Rete Algorithm is an efficient method for solving this problem and is used by a number of expert system tools, including OPS5 and Eclipse.

The Rete is a directed, acyclic, rooted graph.

Each path from the root node to a leaf in the tree represents the left-hand side of a rule.

Each node stores details of which facts have been matched by the rules at that point in the path. As facts are changed, the new facts are propagated through the Rete from the root node to the leaves, changing the information stored at nodes appropriately.

This could mean adding a new fact, or changing information about an old fact, or deleting an old fact. In this way, the system only needs to test each new fact against the rules, and only against those rules to which the new fact is relevant, instead of checking each fact against each rule.

The Rete algorithm depends on the principle that in general, when using forward chaining in expert systems, the values of objects change relatively infrequently, meaning that relatively few changes need to be made to the Rete.

In such cases, the Rete algorithm can provide a significant improvement in performance over other methods, although it is less efficient in cases where objects are continually changing.

The basic inference cycle of a production system is match, select and execute as indicated in Fig 8.6. These operations are performed as follows 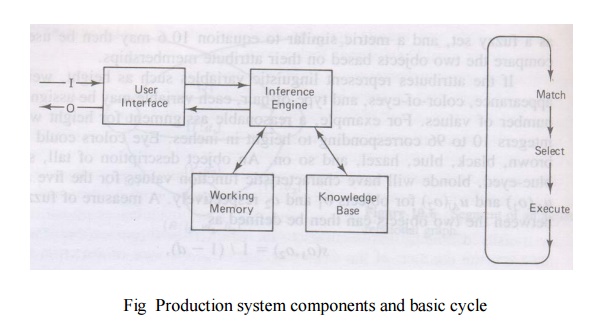 During the match portion of the cycle, the conditions in the LHS of the rules in the knowledge base are matched against the contents of working memory to determine which rules have their LHS conditions satisfied with consistent bindings to working memory terms.

From the conflict set, one of the rules is selected to execute. The selection strategy may depend on recency of useage, specificity of the rule or other criteria

The rule selected from the conflict set is executed by carrying the action or conclusion part of the rule, the RHS of the rule. This may involve an I/O operation, adding, removing or changing clauses in working memory or simply causing a halt

The main time saving features of RETE are as follows

in most expert systems, the contents of working memory change very little from cycle to cycle. There is persistence in the data known as temporal redundancy. This makes exhaustive matching on every cycle unnecessary. Instead, by saving match information, it is only necessary to compare working memory changes on each cycle. In RETE, addition to, removal from, and changes to working memory are translated directly into changes to the conflict set in Fig . Then when a rule from the conflict set has been selected to fire, it is removed from the set and the remaining entries are saved for the next cycle. Consequently, repetitive matching of all rules against working memory is avoided. Furthermore, by indexing rules with the condition terms appearing in their LHS, only those rules which could match. Working memory changes need to be examined. This greatly reduces the number of comparisons required on each cycle

Many rules in a knowledge base will have the same conditions occurring in their LHS. This is just another way in which unnecessary matching can arise. Repeating testing of the same conditions in those rules could be avoided by grouping rules which share the same conditions and linking them to their common terms. It would then be possible to perform a single set of tests for all the applicable rules shown in Fig below 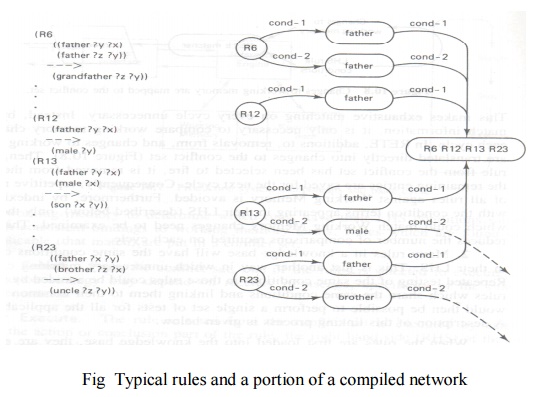