Game playing has been a major topic of AI since the very beginning. Beside the attraction of the topic to people, it is also because its close relation to "intelligence", and its well-defined states and rules.

Game playing has been a major topic of AI since the very beginning. Beside the attraction of the topic to people, it is also because its close relation to "intelligence", and its well-defined states and rules.

The most common used AI technique in game is search. In some other problem-solving activities, state change is solely caused by the action of the system itself. However, in multi-player games, states also depend on the actions of other players (systems) who usually have different goals.

A special situation that has been studied most is two-person zero-sum game, where the two players have exactly opposite goals, that is, each state can be evaluated by a score from one player's viewpoint, and the other's viewpoint is exactly the opposite. This type of game is common, and easy to analyze, though not all competitions are zero-sum!

(such as Bridge and games where dice are used). Given sufficient time and space, usually an optimum solution can be obtained for the former by exhaustive search, though not for the latter. However, for most interesting games, such a solution is usually too inefficient to be practically used.

For two-person zero-sum perfect-information game, if the two players take turn to move, the minimax procedure can solve the problem given sufficient computational resources. This algorithm assumes each player takes the best move in each step.

First, we distinguish two types of nodes, MAX and MIN, in the state graph, determined by the depth of the search tree.

Minimax procedure: starting from the leaves of the tree (with final scores with respect to one player, MAX), and go backwards towards the root (the starting state).

All nodes in the tree will all be scored, and the path from root to the actual result is the one on which all nodes have the same score.

Because of computational resources limitation, the search depth is usually restricted, and estimated scores generated by a heuristic function are used in place of the actual score in the above procedure. 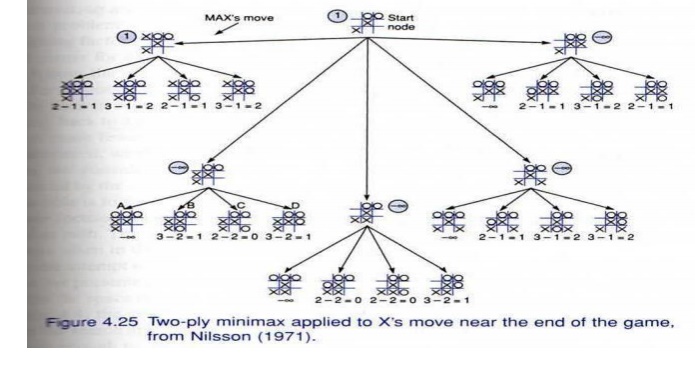 Very often, the game graph does not need to be fully explored using Minimax.

Based on explored nodes' score, inequity can be set up for nodes whose children haven't been exhaustively explored. Under certain conditions, some branches of the tree can be ignored without changing the final score of the root.

Examples: in the following partial trees, the other children of node (5) do not need to be generated. 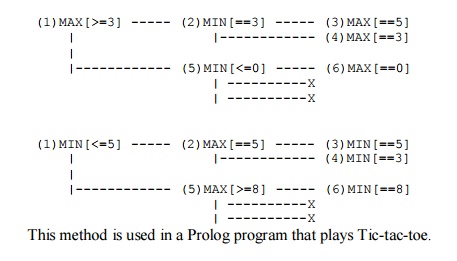