A system that uses this form of knowledge representation is called a production system.

A production system consists of rules and factors. Knowledge is encoded in a declarative from which comprises of a set of rules of the form

IF the initial state is a goal state THEN quit.

The major components of an AI production system are

A set of production rules and

The goal database is the central data structure used by an AI production system. The production system. The production rules operate on the global database. Each rule has a precondition that is either satisfied or not by the database. If the precondition is satisfied, the rule can be applied. Application of the rule changes the database. The control system chooses which applicable rule should be applied and ceases computation when a termination condition on the database is satisfied. If several rules are to fire at the same time, the control system resolves the conflicts.

Production Systems are highly modular because the individual rules can be added, removed or modified independently.

The production rules are expressed in a natural form, so the statements contained in the knowledge base should the a recording of an expert thinking out loud.

One important disadvantage is the fact that it may be very difficult analyse the flow of control within a production system because the individual rules don’t call each other.

Production systems describe the operations that can be performed in a search for a solution to the problem. They can be classified as follows.

Monotonic production system :- A system in which the application of a rule never prevents the later application of another rule, that could have also been applied at the time the first rule was selected.

Partially commutative , monotonic production systems are useful for solving ignorable problems. These systems are important for man implementation standpoint because they can be implemented without the ability to backtrack to previous states, when it is discovered that an incorrect path was followed. Such systems increase the efficiency since it is not necessary to keep track of the changes made in the search process.

Monotonic partially commutative systems are useful for problems in which changes occur but can be reversed and in which the order of operation is not critical (ex: 8 puzzle problem).

Production systems that are not partially commutative are useful for many problems in which irreversible changes occur, such as chemical analysis. When dealing with such systems, the order in which operations are performed is very important and hence correct decisions have to be made at the first time itself.

Selecting rules; keeping track of those sequences of rules that have already been tried and the states produced by them.

Goal state provides a basis for the termination of the problem solving task.

Execution of a rule requires a match.

Selecting one rule to execute;

Uninformed Search Strategies have no additional information about states beyond that

provided in the problem definition.

Analyze each of them with respect to the seven problem characteristics 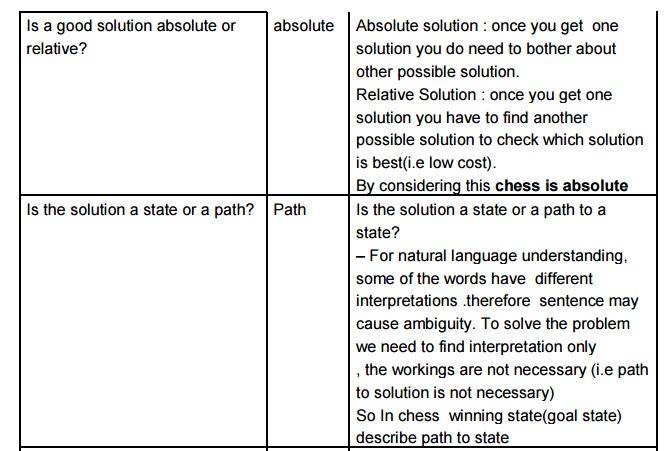 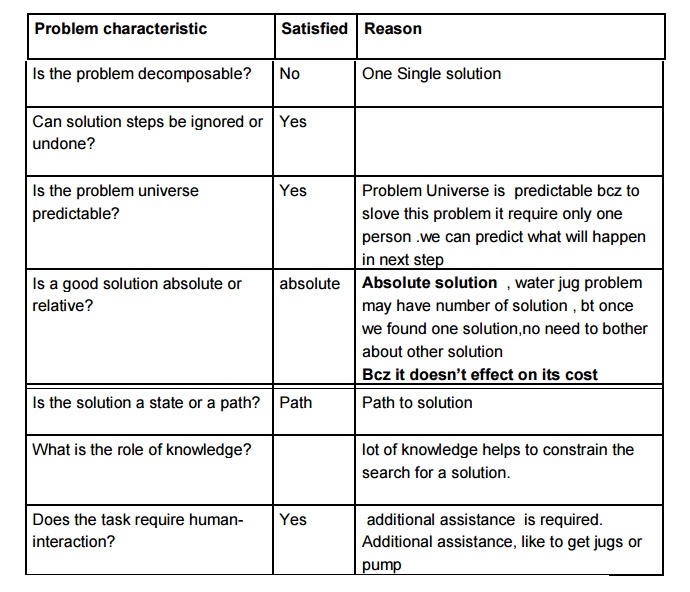 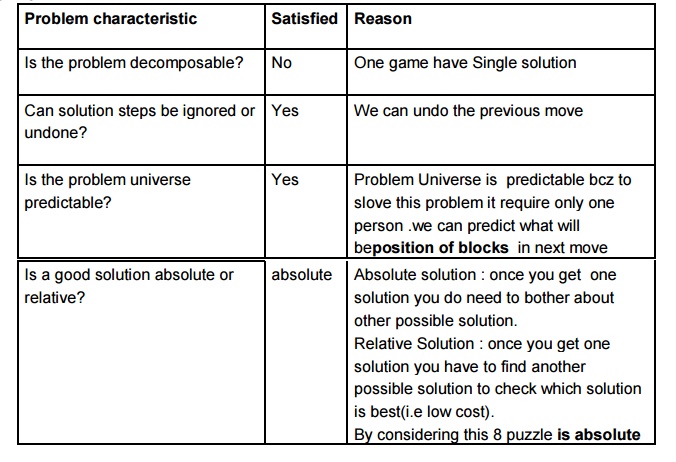 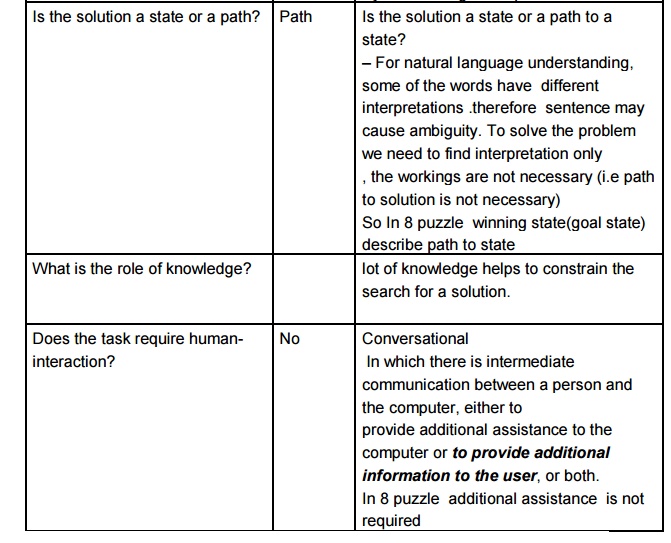 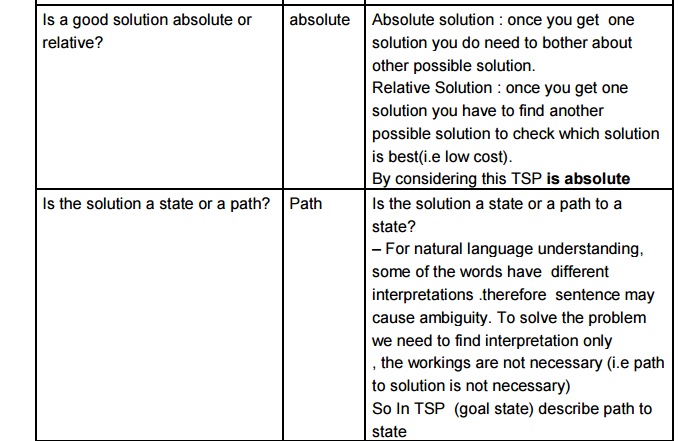 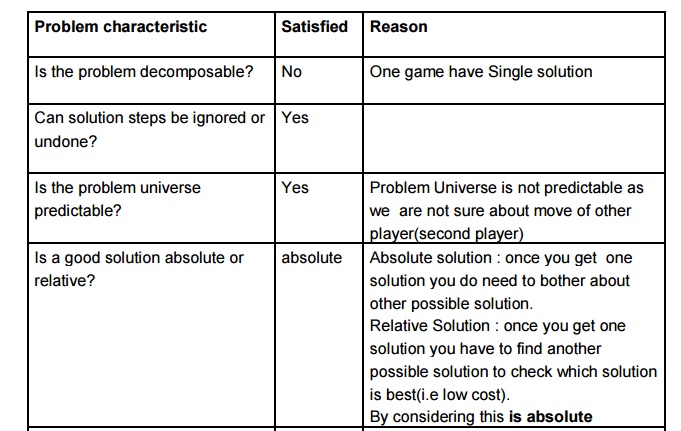 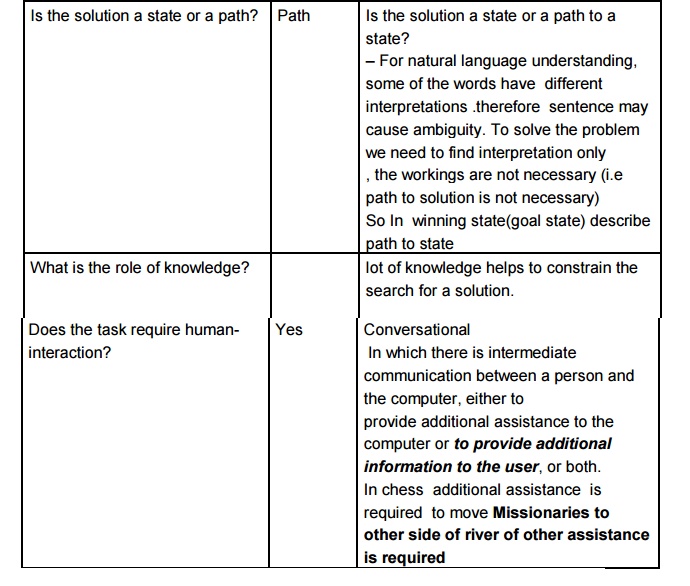 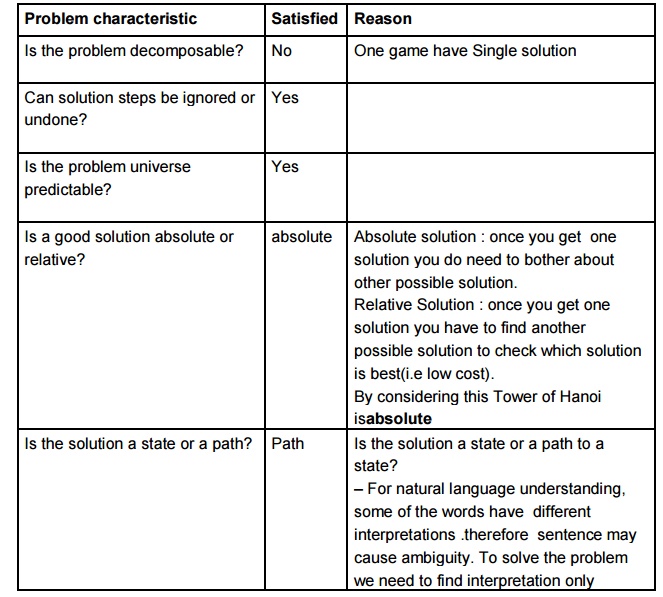 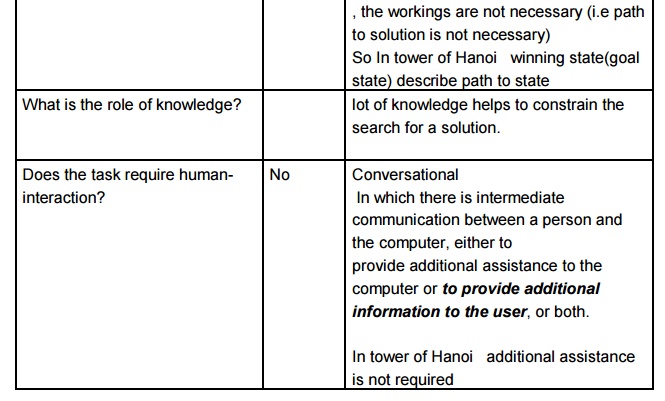 There are two aspects of algorithmic performance:

How fast does the algorithm perform?

What affects its runtime?

What kind of data structures can be used?

How does choice of data structure affect the runtime?

Algorithms can not be compared by running them on computers. Run time is system dependent. Even on same computer would depend on language Real time units like microseconds not to be used.

Generally concerned with how the amount of work varies with the data.

Counting number of operations involved in the algorithms to handle n items.

Consider the task of searching a list to see if it contains a particular value.

A useful search algorithm should be general.

Work done varies with the size of the list

What can we say about the work done for list of any length?

The work involved : Checking target value with each of the n elements.

Computer scientists tend to be concerned about the Worst Case complexity.

The worst case guarantees that the performance of the algorithm will be at least as good as the analysis indicates.

It is the best statistical estimate of actual performance, and tells us how well an algorithm performs if you average the behavior over all possible sets of input data. However, it requires considerable mathematical sophistication to do the average case analysis.

This one takes n2  + n operations

We want to understand how the performance of an algorithm responds to changes in problem size. Basically the goal is to provide a qualitative insight. The Big-O notation is a way of measuring the order of magnitude of a mathematical expression

O(n) means on the Order of n

The idea is to reduce the formula in the parentheses so that it captures the qualitative behavior in simplest possible terms. We eliminate any term whose contribution to the total ceases to be significant as n becomes large.

We also eliminate any constant factors, as these have no effect on the overall pattern as n increases. Thus we may approximate f(n) above as

i.e. f is big –O of g if there is larger than cg for sufficiently large than N) such that f is not value of n ( greater  c g(n) is an upper bound on the value of f(n)

That is, the number of operations is at worst proportional to g(n) for all large values of n.

How does one determine c and N?

You want to find c such that a term in f becomes the largest and stays the largest. Compare first and second term. First will overtake the second at N = 2,

Look at it another way : suppose you want to find weight of elephants, cats and ants in a jungle. Now irrespective of how many of each item were there, the net weight would be proportional to the weight of an elephant.

Since these loops are nested, the efficiency is n3/2, or O(n3) in big-O terms.

Thus, for two loops with O[f1(n)] and O[f2(n)] efficiencies, the efficiency of the nesting of these two loops is

The number of operations executed by these loops is the sum of the individual loop efficiencies. Hence, the efficiency is n/2+n2, or O(n2) in big-O terms.

Thus, for two loops with O[f1(n)] and O[f2(n)] efficiencies, the efficiency of the sequencing of these two loops is O[fD(n)] where fD(n) is the dominant of the functions f1(n) and f2(n).

In measuring performance, we are generally concerned with how the amount of work varies with the data. Consider, for example, the task of searching a list to see if it contains a particular value.

A useful search algorithm should be general.

Work done varies with the size of the list

What can we say about the work done for list of any length?

How much work to find the target in a list containing N elements?

Note: we care here only about the growth rate of work. Thus, we toss out all constant values.

Best Case work is constant; it does not grow with the size of the list.

Worst and Average Cases work is proportional to the size of the list, N.

does not mean that it takes only one operation

does not mean that it takes N operations

is a notation for “work grows at a linear rate”

Some algorithms even take less time than the number of elements in the problem. There is a notion of logarithmic time algorithms.

Similarly suppose we have

then we can write

If the work of an algorithm can be reduced by half in one step, and in k steps we are able to solve the problem then

or in other words

This algorithm will be having a logarithmic time complexity ,usually written as O(ln n).

Because logan will increase much more slowly than n itself, logarithmic algorithms are generally very efficient. It also can be shown that it does not matter as to what base value is chosen.

Since the loop variable is cut in half each time through the loop, the number of times the statements inside the loop will be executed is log2n.

Thus, an algorithm that halves the data remaining to be processed on each iteration of a loop will be an O(log2n) algorithm.

There are a large number of algorithms whose complexity is O( n log2n) .

These are called exponential algorithms. They are of more theoretical rather than practical interest because they cannot reasonably run on typical computers for moderate values of n.

Comparison of N, logN and N2 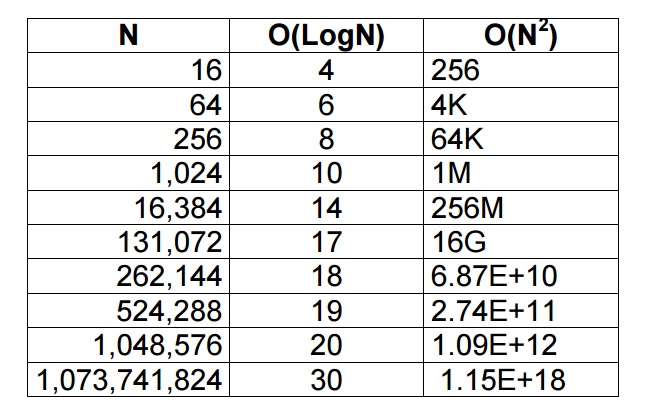 Constraint satisfaction is the process of finding a solution to a set of constraints that impose conditions that the variables must satisfy. A solution is therefore a set of values for the variables that satisfies all constraints—that is, a point in the feasible region.

The techniques used in constraint satisfaction depend on the kind of constraints being considered. Often used are constraints on a finite domain, to the point that constraint satisfaction problems are typically identified with problems based on constraints on a finite domain. Such problems are usually solved via search, in particular a form of backtracking or local search. Constraint propagation are other methods used on such problems; most of them are incomplete in general, that is, they may solve the problem or prove it unsatisfiable, but not always. Constraint propagation methods are also used in conjunction with search to make a given problem simpler to solve. Other considered kinds of constraints are on real or rational numbers; solving problems on these constraints is done via variable elimination or the simplex algorithm.

Solving a constraint satisfaction problem on a finite domain is an NP complete problem with respect to the domain size. Research has shown a number of tractable subcases, some limiting the allowed constraint relations, some requiring the scopes of constraints to form a tree, possibly in a reformulated version of the problem. Research has also established relationship of the constraint satisfaction problem with problems in other areas such as finite model theory.