How knowledge can be represented as “symbol structures” that characterize bits of knowledge about objects, concepts, facts, rules, strategies;

In the previous section much has been illustrated about knowledge and KR related issues. This section, illustrates :

How knowledge can be represented  as “symbol structures”  that  characterize bits of knowledge about objects, concepts, facts, rules, strategies;

Intelligent Behavior can be achieved by manipulation of symbol structures.

KR languages are designed to facilitate operations over symbol structures, have precise syntax and semantics;

Syntax  tells which expression is legal ?,

Semantic tells what an expression means ?

To satisfy these assumptions about KR, we need formal notation that allow automated inference and problem solving. One popular choice is use of logic.

Logic is concerned with the truth of statements about the world.

Generally each statement is either TRUE or FALSE.

Specifies the symbols in the language about how they can be combined to form sentences. The facts about the world are represented as sentences in logic.

Specifies how to assign a truth value to a sentence based on its meaning in the world. It Specifies what facts a sentence refers to.

A fact is a claim about the world, and it may be TRUE or FALSE.

Specifies methods for computing new sentences from the existing sentences.

Facts : are claims about the world that are True or False. Representation : is an expression (sentence), stands for the objects and relations.

Sentences : can be encoded in a computer program.

Logic as a KR Language

Logic is a language for reasoning, a collection of rules used while doing logical reasoning. Logic is studied as KR languages in artificial intelligence.

◊ Logic is a formal system in which the formulas or sentences have true or false values.

Expressive enough to represent important objects and relations in a problem domain.

Efficient enough in reasoning and answering questions about implicit information in a reasonable amount of time.

They represent things and allow more or less efficient inference.

Propositional logic and Predicate logic are fundamental to all logic.

Logic can be used to represent simple facts.

The facts are claims         about the world that are True or False.

To build a Logic-based      representation :

User defines a set of primitive symbols and the associated semantics.

Logic defines ways of putting symbols together so that user can define legal sentences in the language that represent TRUE facts.

Logic defines ways of inferring new sentences from existing ones.

Sentences - either TRUE or false but not both are called propositions.

A declarative sentence expresses a statement with a proposition as content; example:

In this section, first Propositional Logic (PL) is briefly explained and then the Predicate logic is illustrated in detail.

Propositions are “sentences” ,  either true or false but not both.

A sentence is smallest unit in propositional logic.

‡ If proposition is true,  then truth value is "true" .

If proposition is false,    then truth value is "false" .

Propositional logic is  fundamental to all logic.

These and few more related terms, such as, connective, truth value, contingencies, tautologies, contradictions, antecedent, consequent, argument are explained below.

Simple statements (sentences), TRUE or FALSE, that does not contain any other statement as a part, are basic propositions; lower-case letters, p, q, r, are symbols for simple statements.

Large, compound or complex statement are constructed from basic propositions by combining them with connectives.

The connectives join simple statements into compounds, and joins compounds into larger compounds.

Table below indicates, the basic connectives and their symbols :

Connectives and Symbols in decreasing order of operation priority

Note : The propositions and connectives are the basic elements of propositional logic.

The truth value of a statement is its  TRUTH or FALSITY ,

is either TRUE or FALSE, and so on.

A proposition that is always true is called a "tautology".

e.g., (P v ¬P) is always true regardless of the truth value of the proposition P.

A proposition that is always false is called a "contradiction".

e.g., (P ∧ ¬P) is always false regardless of the truth value of the proposition P.

A proposition  is called a "contingency" , if that proposition is neither a tautology nor a contradiction .

1st statement or "if - clause" (here p) is called antecedent ,

2nd statement or "then - clause" (here q) is called consequent.

An argument is a demonstration or a proof of some statement. Example : "That bird is a crow; therefore, it's black."

Any argument can be expressed as a compound statement.

"proposition") known as the conclusion.

Take all the premises, conjoin them, and make that conjunction the antecedent of a conditional and make the conclusion the consequent. This implication statement is called the corresponding conditional of the argument.

An argument is valid

"if and only if" its corresponding conditional is a tautology.

"if and only if" their conjunction is not a contradiction.

"if and only if" their truth table columns are identical;

"if and only if" the statement of their equivalence using " ≡ " is a tautology.

The propositional logic, is not powerful enough for all types of assertions;

Example : The assertion "x > 1", where x is a variable, is not a proposition because it is neither true nor false unless value of x is defined.

either we substitute a specific number for x ;

“ All men are mortal.

Socrates is a man.

Then Socrates is mortal” ,

These cannot be expressed in propositional logic as a finite and logically valid argument (formula).

We need languages : that allow us to describe properties ( predicates ) of objects, or a relationship among objects represented by the variables .

Predicate logic satisfies the requirements of a language.

Predicate logic is powerful enough for expression and reasoning.

Predicate logic is built upon the ideas of propositional logic.

Every complete "sentence" contains two parts : a "subject" and a "predicate".

The subject is what (or whom) the sentence is about. The predicate tells something about the subject;

Predicate, always includes verb, tells something about the subject.

Predicate is a verb phrase template that describes a property of objects, or a relation among objects represented by the variables. Example:

"The cover of this book is blue"

Predicates are given names; Let „B‟ is name for predicate "is_blue". Sentence is represented as "B(x)" , read as "x is blue";

Examples of  disjunction (OR) and conjunction (AND).

Consider the expression with the respective logic symbols || and &&

the value can be FALSE or TRUE

As said before,x > 1 is not proposition and why ?

Also said, that for  x > 1 to be a proposition what is required ?

Generally, a predicate with variables (is called atomic formula) that can be made a proposition by applying one of the following two operations to each of its variables :

Quantify the variable using a quantifier on formulas of predicate logic (called wff well-formed formula), such as x > 1 or P(x), by using Quantifiers on variables.

x > 5 is not a proposition, its truth depends upon the value of variable x

to reason such statements, x need to be declared

Statement   p is a statement about x

a set of entities that the quantifiers deal.

entities can be set of real numbers, set of integers, set of all cars on a parking lot, the set of all students in a classroom etc.

universe is thus the domain of the (individual) variables.

propositions in the predicate logic are statements on objects of a universe.

The universe is often left implicit in practice, but it should be obvious from the context.

About "natural numbers" forAll x, y (x < y or x = y or x > y), there is no need to be more precise and say forAll x, y in N, because N is implicit, being the universe of discourse.

About a property that holds for natural numbers but not for real numbers, it is necessary to qualify what the allowable values of x and y are. 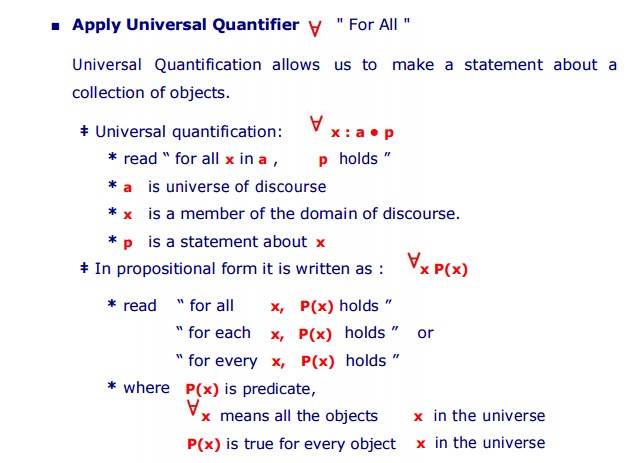 Existential Quantification allows us to state that an object does exist without naming it. 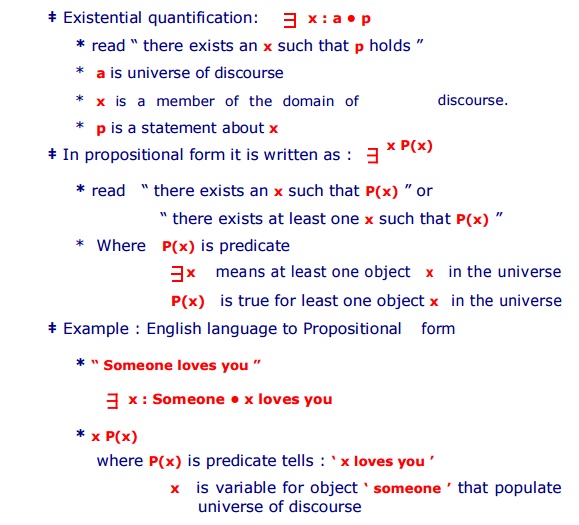 In mathematical logic, a formula is a type of abstract object.

A token of a formula is a symbol or string of symbols which may be interpreted as any meaningful unit in a formal language.

Defined recursively as variables, or constants, or functions like f(t1, . . . , tn), where f is an n-ary function symbol, and t1, . . . , tn are terms. Applying predicates to terms produces atomic formulas.

An atomic formula (or simply atom) is a formula with no deeper propositional structure, i.e., a formula that contains no logical connectives or a formula that has no strict sub-formulas.

Atoms are thus the simplest well-formed formulas of the logic.

Compound formulas are formed by combining the atomic formulas using the logical connectives.

Well-formed formula ("wiff") is a symbol or string of symbols (a formula) generated by the formal grammar of a formal language.

An atomic formula is one of the form :

The ways these two attributes "instance" and "isa", are logically expressed are shown in the example below :

Example : A simple sentence like "Joe is a musician"

Here "is a" (called IsA) is a way of expressing what logically is called a class-instance relationship between the subjects represented by the terms "Joe" and "musician".

"Joe" is an instance of the class of things called "musician". "Joe" plays the role of instance,

"musician" plays the role of class in that sentence.

Note :  In such a sentence, while for a human there is no confusion,

but for computers each relationship have to be defined explicitly.

The objective is to define class of functions C computable in terms of F.

This is expressed as C { F } is explained below using two examples :

values T or F for true and false respectively.

The above definition incorporates an instance that : if the product of no numbers ie 0! = 1 ,

◊ The graph of a well known triangular function is shown below

the conditional expressions for triangular functions are

Resolution is a procedure used in proving that arguments which are expressible in predicate logic are correct.

Resolution is a procedure that produces proofs by refutation or contradiction.

Resolution lead to refute a theorem-proving technique for sentences in propositional logic and first-order logic.

Resolution is a rule of inference.

Resolution is a computerized theorem prover.