There are four types of Knowledge representation : Relational, Inheritable, Inferential, and Declarative/Procedural.

There are four types of Knowledge representation :

provides a framework to compare two objects based on equivalent attributes.

any instance in which two different objects are compared is a relational type of knowledge.

is obtained from associated objects.

it prescribes a structure in which new objects are created which may inherit all or a subset of attributes from existing objects.

is inferred from objects through relations among objects.

e.g., a word alone is a simple syntax, but with the help of other words in phrase the reader may infer more from a word; this inference within linguistic is called semantics.

e.g. laws, people's name; these are facts which can stand alone, not dependent on other knowledge;

a representation in which the control information, to use the knowledge, is embedded in the knowledge itself.

e.g. computer programs, directions, and recipes; these indicate specific use or implementation;

This knowledge associates elements of one domain with another domain.

Relational knowledge is made up of objects consisting of attributes and their corresponding associated values.

The results of this knowledge type is a mapping of elements among different domains.

The table below shows a simple way to store facts.

The facts about a set of objects are put systematically in columns. − This representation provides little opportunity for inference.

Given the facts it is not possible to answer simple question such as :

Who is the heaviest player ? ".

but if a procedure for finding heaviest player is provided, then these facts will enable that procedure to compute an answer.

Here the knowledge elements inherit attributes from their parents.

The knowledge is embodied in the design hiera hies found in the functional, physical and process domains. Within the hiera hy, elements inherit attributes from their parents, but in many cases not all attributes of the parent elements be prescribed to the child elements.

The inheritance is a powerful form of inference, but not adequate. The basic KR needs to be augmented with inference mechanism.

The KR in hiera hical structure, shown below, is called “semantic network” or a collection of “frames” or “slot-and-filler structure". The structure shows property inheritance and way for insertion of additional knowledge.

Property inheritance : The objects or elements of specific classes inherit attributes and values from more general classes. The classes are organized in a generalized hierahy. 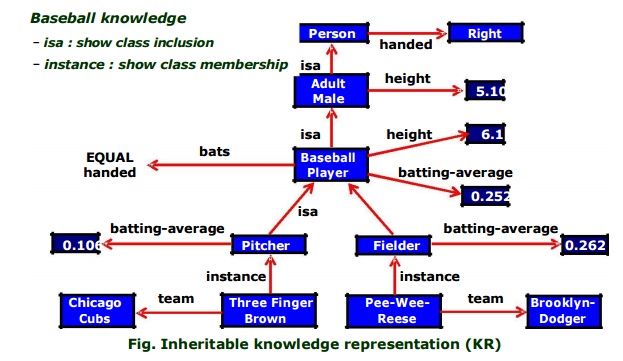 The box nodes represents objects and values of the attributes.

◊ Viewing a node as a frame

Retrieve a value V for an attribute A of an instance object O. Steps to follow:

Find object O in the knowledge base.

If there is a value for the attribute A then report that value.

Else, if there is a value for the attribute instance; If not, then fail.

Else, move to the node corresponding to that value and look for a value for the attribute A; If one is found, report it.

Else, do until there is no value for the “isa” attribute or

until an answer is found :

Get the value of the “isa” attribute and move to that node.

See if there is a value for the attribute A; If yes, report it.

This algorithm is simple. It describes the basic mechanism of inheritance. It does not say what to do if there is more than one value of the instance or “isa” attribute.

This can be applied to the example of knowledge base illustrated, in the previous slide, to derive answers to the following queries :

but  does  require  analysis  of  the  given  information  to  generate  new

given a set of relations and values, one may infer other values or relations.

a predicate logic (a mathematical deduction) is used to infer from a set of attributes.

the symbols used for the logic operations are :

From these three statements we can infer that :

" Wonder lives either on land or on water."

Note : If more information is made available about these objects and their relations, then more knowledge can be inferred.

Differences between Declarative/Procedural knowledge is not very clear.

Here, the knowledge is based on declarative facts about axioms and domains .

axioms are assumed to be true unless a counter example is found to invalidate them.

− domains represent the physical world and the pe  eived functionality.

axiom and domains thus simply exists and serve as declarative statements that can stand alone.

Here, the knowledge is a mapping process between domains that specify

“what to do when” and the representation is of “how to make it” rather than “what it is”. The procedural knowledge :

are represented as small programs that know how to do specific things, how to proceed.