For example, input representations of speech waveforms or visual scenes may have been corrupted by noise or other unwanted distortions.

In such cases, we do not want to reject the input out of hand. Our systems should be more tolerant of such problems

For example, the task may be to locate a human face or human body in photographs without the necessity of storing hundreds of specific face templates

Matching between photographs regions and corresponding descriptions then could be approached using either a measure of correlation, by altering the image to obtain a closer fit

If nothing is known about the noise and distortion characteristics, correlation methods can be ineffective or even misleading. In such cases, methods based on mechanical distortion may be appropriate

For example, our reference image is on a transparent rubber sheet. This sheet is moved over the input image and at each location is stretched to get the best match alignment between the two images

Use the number of rigid pieces connected with springs. This pieces can correspond to low level areas such as pixels or even larger area segments 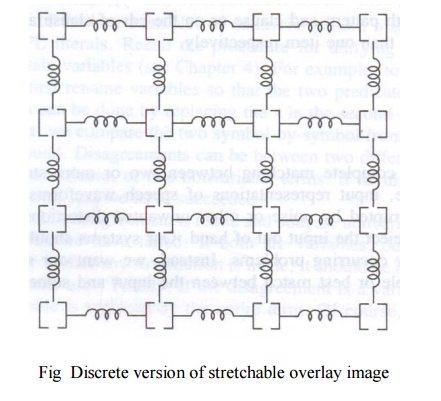 To model any restrictions such as the relative positions of body parts, nonlinear cost functions of piece displacements can be used

In using the template-spring reference image and heuristic methods to compare against different segments of the sensed picture, the search and match process can be made tractable

Any matching metric used in the least cost comparison would need to take into account the sum of the distortion costs Cd , the sum of the costs for reference and

sensed component dissimilarities Cc , and the sum of penalty costs for missing components Cm . Thus, the total cost is given by

For example, in problem solving or analogical inference, differences are expected. In such cases the two structures are matched to isolate the differences in order that they may be reduced or transformed. Once again, partial matching techniques are appropriate

In visual application, an industrial part may be described using a graph structure where the set of nodes correspond to rectangular or cylindrical block subparts

Labels for rectangular block nodes contain length, width and height, while labels for cylindrical block nodes, where location can be above, to the right of, behind, inside and so on

In Fig 8.5 illustrates a segment of such a graph 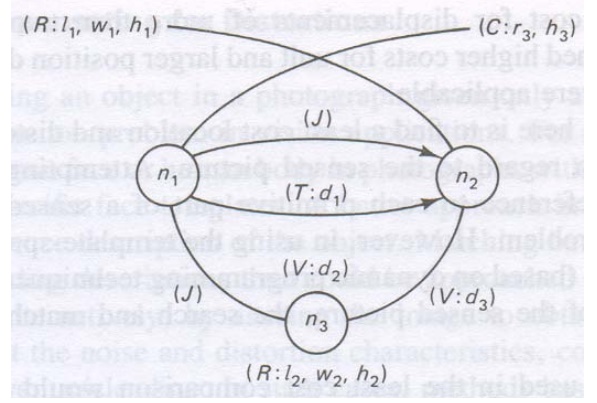 In the fig the following abbreviations are used

Interpreting the graph, we see it is a unit consisting of subparts, mode up of rectangular and cylindrical blocks with dimensions specified by attribute values

The blocks n1 and n2 are above the rectangular block n3 by d2 and d3 units respectively, and so on

Graphs such as this are called attributed relational graphs (ATRs). Such a graph G is defined as a sextuple G = (N, B, A, Gn, Gb)

When the representations are graph structures like ARGs, a similarity measure may be computed as the total cost of transforming one graph into the other

For example, the similarity of two ARGs may be determined with the following steps:

o  Decompose the ARGs into basic subgraphs, each having a depth of one Compute the minimum cost to transform either basic ARG into the other one subgraph-by-subgraph

An ARG may be transformed by the three basic operations of node or branch deletions, insertions, or substitutions, where each operation is given a cost based on computation time or other factors