At the chemical level, the smallest unit of matter is the atom . All living and nonliving thingsare made up of atoms.

At the chemical level, the smallest unit of matter is the atom (see Figure 1.10). All living and nonliving thingsare made up of atoms. The characteristics of the each substance result from the types of atoms involved and how they are combined. An atom is made up of three different types of particles—protons, neutrons, and electrons. Protons carry a positive ( ) electricalcharge; neutrons have no charge; and electrons carry a negative (-) charge. The protons and neutrons are al-most the same size and mass, while the electrons are much lighter. Hence, the weight of the body is equal to all the neutrons and protons combined. 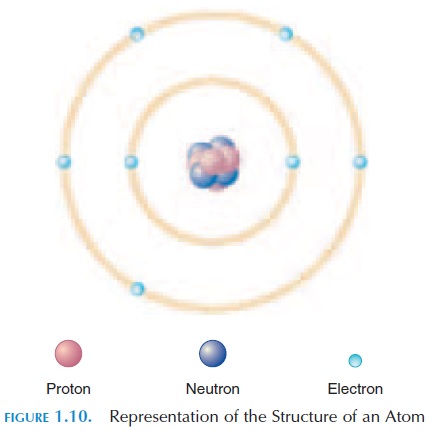 Normally, because positive charges attract nega-tive charges, an atom carries an equal number of pro-tons and electrons. The number of protons in an atom is known as the atomic number. For example, a hydrogen atom has an atomic number of 1, mean-ing that it has one proton and one electron. The pos-itively charged proton is usually in the center, with the nucleus and the negatively charged electron moving around it in an orbit referred to as the elec-tron shell.

At times, the electrons may not equal the number of protons in an atom. In this case, the chemical may have more positive charges or more negative charges. They then tend to attract or repel other chemicals, depending on their charges. This is the basis for the movement of an electrical impulse down the nerves. 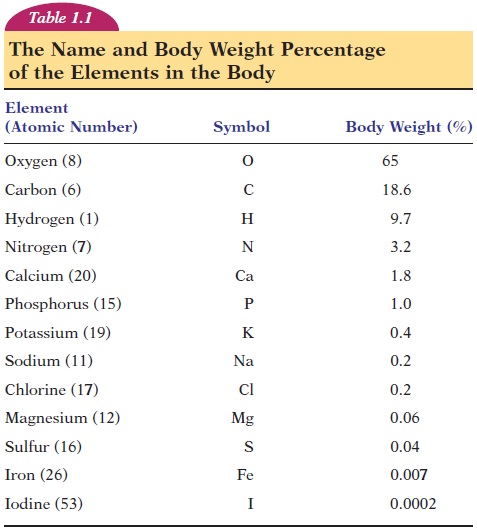 All atoms are assigned to groups called elements, based on the number of protons they carry or, in other words, on their atomic number. Elements are substances that cannot be split into simpler sub-stances by ordinary chemical means. (An atom is the smallest unit of matter that has the properties and characteristics of elements.) There are 92 elements in nature. As a standard, each element is given a sym-bol. Many symbols are connected to their Englishnames, while other symbols to their Latin names. The symbols and percentage of body weight for thir-teen of the most abundant elements in the human body are given in Table 1.1. These elements are mostly combined with other elements (discussed later). Note that the elements oxygen, carbon, hydro-gen, and nitrogen contribute to more than 90% of body weight. In addition to these elements, the body has minute quantities of other elements (trace ele-ments), such as silicon, fluorine, copper, manganese,zinc, selenium, and cobalt.