The body is divided into many regions (see Figure 1.7). Knowledge of these regions helps health care professionals identify different areas of the body. Be-cause each region is related to specific internal or-gans, problems in internal organs often present as pain or swelling in these regions. For easy identification, the major body regions are also shown in the photographs. Please refer to Figure 1.7. The major body regions are the head, neck, trunk, upper ex-tremity, and lower extremity. 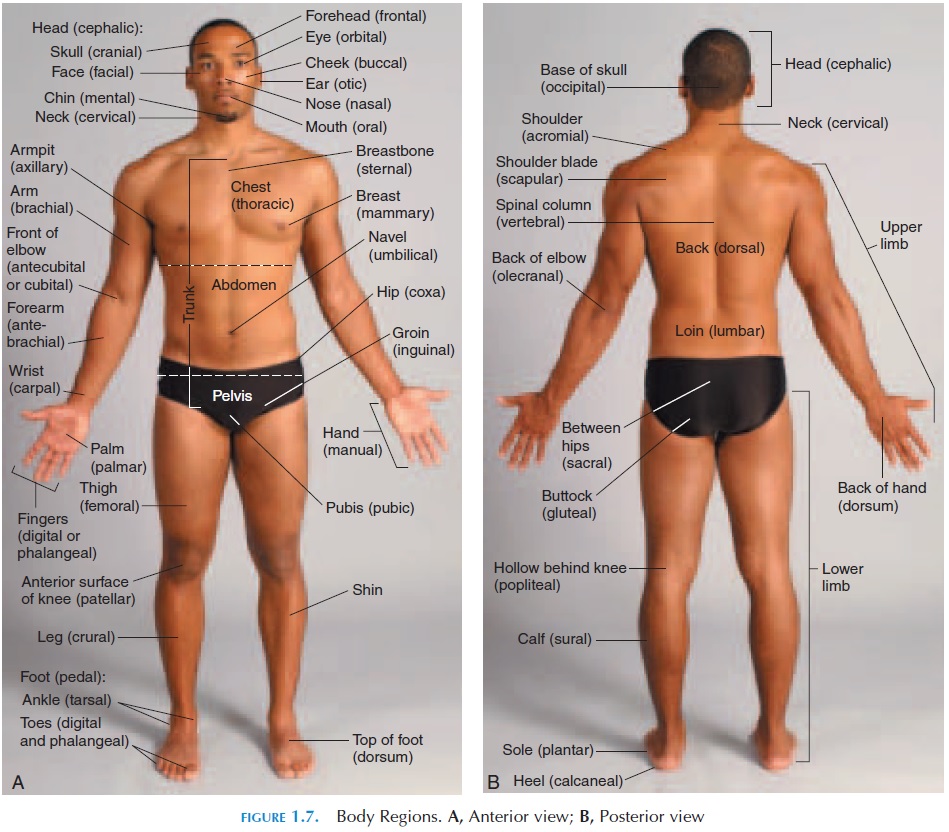 The head is divided into the facial region, which in-cludes the eyes, nose, and mouth and the cranial re-gion—the top and back of the head. The neck, also known as thecervical region, is the area that sup-ports the head. Specific areas of the face are referred to by different terms. The forehead region, frontal; eye, orbital; ear, otic; cheek,buccal, nose, nasal; mouth, oral; and chin, mental.

The trunk refers to the combination of the chest and the abdomen. The chest is also known as the thorax or thoracic region and includes the mammary area (the region around the nipples), the sternal region (the area between the mammary regions), the axil-lary or armpit region and, posteriorly, the vertebral region. The shoulder blade region is referred to as scapular because it is the location of the bonescapula.

The abdomen is the region below the chest. The belly button (navel, or umbilicus) is located in the center of the abdomen. The pelvic region is the low-ermost part of the abdomen and includes the pubic area and the perineum (the region containing the ex-ternal genitalia and the anus). The lower back area is known as the lumbar region, and the large hip area is known as the buttock or gluteal region. The low-ermost, central region of the back is called the sacral region. To locate and relate pain and other problems of the organs lying inside, the abdomen has been di-vided into many subregions.

The abdomen is often divided into four regions— described as the right upper, left upper, right lower, and left lower quadrants (see Figure 1.8). At times, the abdomen is divided into nine regions, drawing two vertical imaginary lines just medial to the nipples and two horizontal lines, one at the lower part of the rib cage and one joining the anterior prominent part of the hip bones. The nine regions (on the right) are the right hypochondriac, right lateral or lumbar, and right inguinal or iliac (lowermost region on the right); (in the middle) epigastric, umbilical, and hypogastricregions; (on the left) left hypochondriac, left lateral, and left inguinal or iliac regions (low-ermost region on the left). 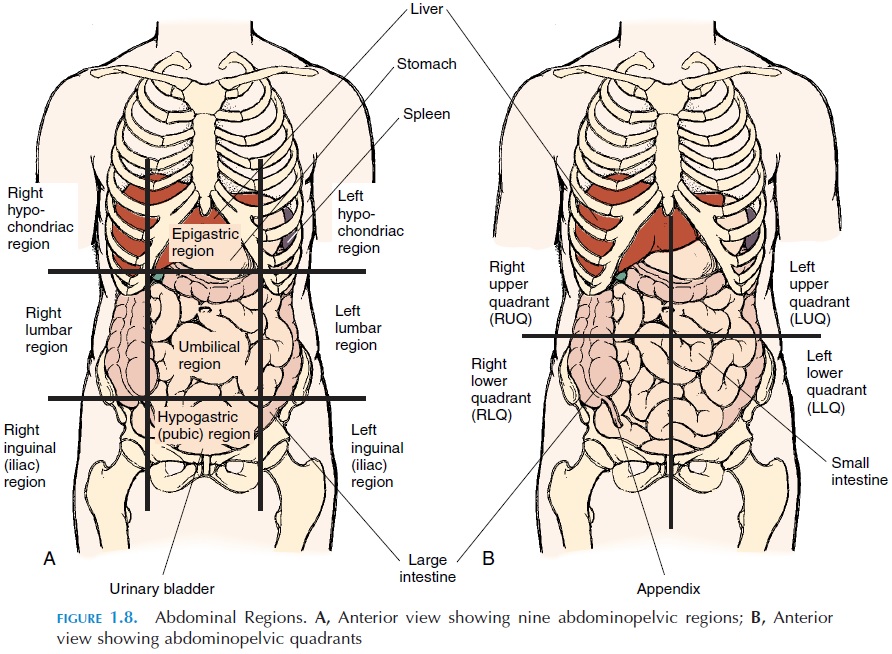 The upper extremity is divided into the deltoid,acromial or shoulder region, brachium or upper arm, antebrachium or forearm, and manus or hand regions. Between the upper arm and forearm isthe elbow or cubital region. The front of the elbow is known as the cubital fossa. If you have had blood taken, it is likely that the needle was introduced into the blood vessel in the cubital fossa. This region is also known as the antecubital region. The back of the elbow is the olecranal region; the wrist is thecarpal region; the front of the hand is the palm, and the back of the hand is the dorsum. The fingers are known as the digital or phalangeal region.