Atoms can interact in three ways; therefore, there are three types of chemical bonds—ionic bonds, covalent bonds, and hydrogen bonds.

Atoms can interact in three ways; therefore, there are three types of chemical bonds—ionic bonds, covalent bonds, and hydrogen bonds.

Some atoms may lose or gain an electron when bond-ing with another atom. In the first case, this atom has one electron less than the number of protons, mean-ing that there are more positive than negative charges. This atom is referred to as a cation (posi-tively charged). In the second case, this atom gains an electron and has more electrons than protons, meaning that there are more negative charges than positive charges. This atom is referred to as an an-ion. Both cations and anions, with their unequalnumber of protons and electrons, are known as ions. Ions are denoted by their chemical symbol, with pos-itive or negative signs given in superscript. For ex-ample, sodium ion is represented as Na ; chlorine as Cl-. Being positively charged, cations attract anions and vice versa. This type of bonding is known as ionic bonds. Ionic bonds and ions are especially im-portant in nerve conduction and brain activity.

The formation of salt—table salt is a good example (see Figure 1.11). The chemical name of table salt is sodium chloride (NaCl); it is made up of sodium and chlorine. Sodium has an atomic number of 11. This means that it has 11 protons (and 11 electrons) to be neutral. Of the eleven electrons, two occupy the first energy level and eight occupy the second energy level and fill it. The remaining one electron (2 8 10) or-bits alone in the third energy level. Because the outer energy level is not full, the sodium atom is reactive and tends to donate its electron to another atom.

In some cases, atoms share their electrons rather than gain or lose them. Such bonds are known as co-valent bonds (see Figure 1.12). The resultant chemi-cal is termed amolecule. A good example is the ele-ment hydrogen. Hydrogen has an atomic number of 1 (i.e., 1 proton and 1 electron). However, the outer 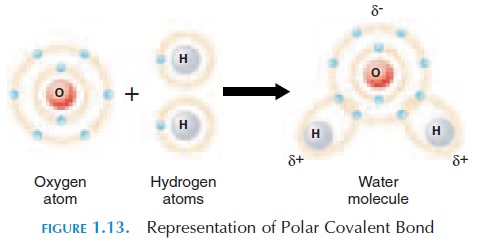 Other than ionic and covalent bonds, other weak at-tractions may be present between atoms of the same molecule or compound or between atoms in other molecules. The most important of these weak attrac-tions are hydrogen bonds, in which a hydrogen atom involved in a polar covalent bond is attracted to oxy-gen or nitrogen involved in a polar covalent bond by itself. This attraction is important. Although mole-cules are not formed through the hydrogen bonds, this bonding can alter the shape of the molecules. For example, it is this weak attraction that holds water together and makes it form a drop. We refer to this force as surface tension (see Figure 1.14). At the molecular level in the body, these hydrogen bonds can alter the properties of proteins, making them change their shape and structure. 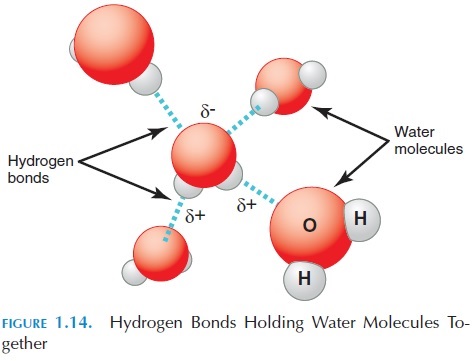 Matter exists as solids, liquids, or gases as a result of the degree of interaction between the atoms and molecules. For example, hydrogen molecules do not attract each other and, therefore, exist as gas. Water, however, has more interactions and exists as liquid throughout a wide temperature range.