Simple epithelium has only one layer of cells over the basement membrane.

As epithelia have common features as mentioned above, they are subtly modified to suit specific func-tions. Epithelia have been classified in accordance with the modifications in numbers of layers and with the shape of cell.

According to the number of layers, they are classi-fied as simple epithelium (one layer) or stratifiedepithelium (multilayered). According to cell shape,epithelia are classified as squamous, cuboidal, tran-sitional, and columnar.

Simple epithelium has only one layer of cells over the basement membrane. Being thin, epithelia are fragile and found only in areas inside the body that are rela-tively protected, such as the lining of the heart and blood vessels and the lining of body cavities. They are also found lining the digestive tract and in the ex-change surfaces of the lungs, where their thinness is an advantage for speedy absorption.

A stratified epithelium has many layers and forms an effective protection from mechanical and chemical stress. They are found in the skin and lining the open-ings of lumens such as the mouth, anus, vagina, and urethra. The squamous, cuboidal, and columnar ep-ithelium may be simple or stratified.

The squamous epithelium consists of cells that are flat and thin and somewhat irregular in shape. Sim-ple squamous epithelium (see Figure 1.21A) isfound in protected regions (being thin and delicate) where absorption takes place or where friction must be minimal. A specific name is given to the epithe-lium that lines body cavities—mesothelium. The simple epithelium lining blood vessels and heart are called endothelium. 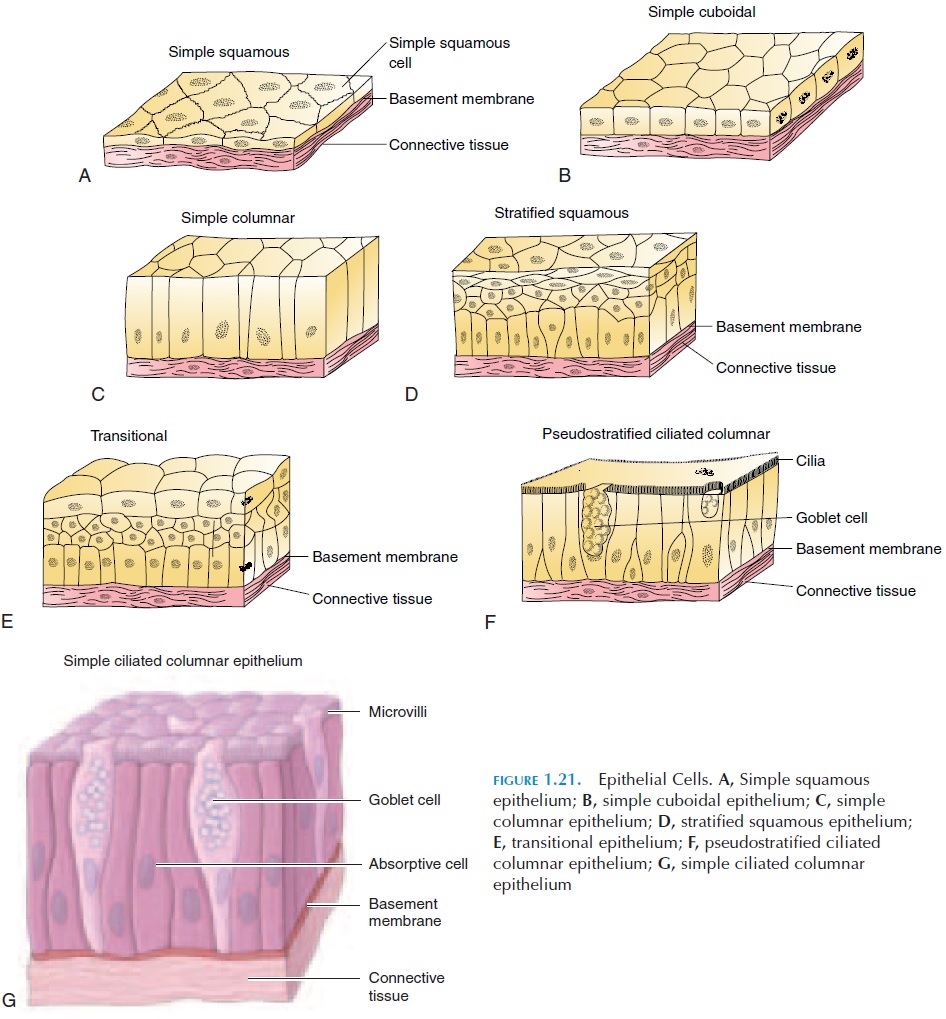 A stratified squamous epithelium has many lay-ers. The skin is a good example. In areas such as the skin, where the barrier formed by the epithelium also protects the body from dehydration, the most super-ficial layers are packed with a protein known as ker-atin. Such epithelia are referred to as keratinized; those without keratin are said to be nonkeratinized.

Cuboidal epithelium (see Figure 1.21B), as the name suggests, appear like a cube in section. They are found in areas where absorption or secretion takes place, such as the pancreas, salivary glands, and thy-roid glands. Stratified cuboidal epithelia are rare and found in the large ducts of the mammary glands and sweat glands.

The glands may be either unicellular—just one se-cretory cell in the epithelia or multicellular, forming simple or more complex tubes that secrete.

The endocrine glands secrete their products di-rectly into the blood. The thyroid gland, pituitary gland, adrenal glands are a few examples of en-docrine glands.