The cell membrane determines which substances enter or leave the cell and is said to be impermeable if it does not allow any substance to pass through.

The cell membrane determines which substances enter or leave the cell and is said to be impermeable if it does not allow any substance to pass through. A cell membrane can also be selectively permeable. It may be impermeable to one substance and freely al-low another to pass through. A typical cell membrane is selectively permeable. Because of its selective per-meability, the cell can maintain a different concen-tration of substances inside the cell than outside the cell. For example, there are more sodium ions out-side the cell compared with inside. This difference in chemical concentration is known as the chemicalgradient. If the inside and outside electrical chargesare compared, the inside of the cell is more negative than the outside. This is known as the electrical gra-dient. Many factors determine whether a substancecan pass through and the direction of movement.

The transport across the membrane may occur with or without the use of energy. Transport without use of energy is referred to as passive transport. For the transport of some substances, energy in the form of ATP must be used. This is known as active trans-port. In both of these transport types, transportersmay or may not be involved—known as mediated or unmediated transport, respectively. There are manymechanisms by which passive transport occurs.

Diffusion (see Figure 1.18) is the movement of ions and molecules from an area of higher concentration to one of lower concentration. This difference in con-centration is known as the concentration gradient. Substances that are lipid-soluble diffuse directly through the phospholipid bilayer. Other substances, such as ions, diffuse through specific channels, if the channels are open. This passive process—diffusion— is important in the body. When the blood reaches the tissue, nutrients move from inside the blood vessels into the interstitial fluid by diffusion. The opposite also occurs by diffusion. Waste products from the cell move along the concentration gradient into the blood. Similarly, carbon dioxide and oxygen between the air and blood move by diffusion. 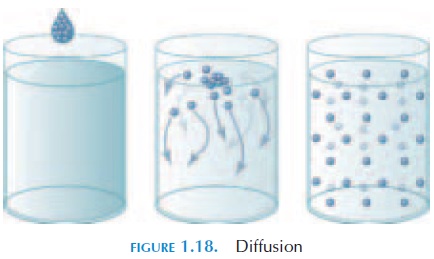 The rate of diffusion depends on the distance that separates the two solutions. To increase efficiency in the body, the distance of the cells from the blood is only about 125 micrometers ( m). The difference be-tween the concentrations of the two solutions also plays an important part. Oxygen in the body moves more rapidly into the tissue when the tissue has been active and the concentration of oxygen is much lower than in the blood.

Molecule size affects diffusion. Smaller particles tend to move at a faster pace than larger particles. Other than distance and concentration gradient and size, the electrical charges on the two substances af-fect diffusion, as the interior of the cell is negative. Even if a concentration gradient exists, a negatively charged substance finds it more difficult to enter the negatively charged cell. Temperature is another fac-tor that affects diffusion. Higher temperatures in-crease the diffusion rate.

Substances that are lipid-soluble, such as alcohol, fatty acids, and steroids, enter the cell easily through the lipid cell membrane if there is a concentration gradient. Substances that are water-soluble, however, must rely on the presence of channels to pass through, even if a concentration gradient exists. The surface area available for diffusion also determines the rate of movement. Because channels occupy only a small percentage of the cell membrane, diffusion through channels is comparatively slower than direct diffusion across the phospholipid bilayer. 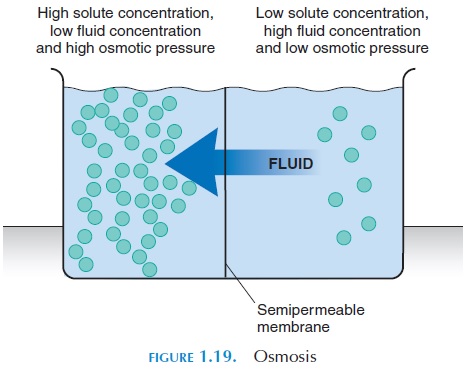 across a semipermeable membrane. Conversely, the movement of water from a region of higher concentra-tion (of water) to a region of lower concentration.

Three important characteristics of osmosis are:

1.        Osmosis is the diffusion of water molecules across a membrane.

2.        Osmosis occurs across a selectively permeable membrane that allows water to freely move through it; not the solutes.

3.        The movement of water is toward the solution with the higher concentration of solutes.

In the body, the fluid inside the cell (intracellular fluid) and the fluid outside the cell (extracellular fluid) have dissolved substances. Each of these sub-stances tend to diffuse as if they were the only sub-stance in the solution. For example, if sodium and chloride are present, they each move along their own concentration gradient. The changes in the concen-tration gradient of chloride do not affect the move-ment of sodium.

Red blood cells can be used to illustrate osmosis. When placed in a glass of water, water rushes (by os-mosis) into the red blood cells because they have more particles inside. The cells swell and immedi-ately rupture. If the cells are placed in a glass of wa-ter into which two spoonsful of table salt was mixed, water from the cell moves out and the cells shrink. Osmotic pressure of a solution is an indication ofthe force of water movement into that solution as a result of its solute concentration.

In filtration, water is forced across a semipermeable membrane as a result of hydrostatic pressure. For example, it is equivalent to the pressure that pushes water out of a nick in a garden hose through which water is flowing. By filtration, fluid moves out of cap-illaries. Similarly, fluid filtered from the blood into the renal tubules of the kidney finally form urine. The movement of larger particles, along with water, by fil-tration depends on the size of the pores present in the membrane.

Substances, such as glucose and amino acids, are transported by carriers because they are insoluble in lipids and are too large to be transported through channels. Carriers specific for these substances bind to them and move them into the cell along the con-centration gradient. Here, no energy is used. It should be noted that it is a diffusion process, except that it is facilitated by carriers. This type of transport is referred to as facilitated diffusion. The rate at which they move into the cell depends on the number of carriers present on the cell membrane.

Substances outside the cell that are too large to enter via channels are “engulfed” by a depression in the cell membrane. The cell membrane folds to form two processes, similar to two arms in an embrace, and the processes fuse with each other to form a vesicle inside the cytoplasm (see Figure 1.20A). In some types of endocytosis, the substance initially binds to receptor proteins before a vesicle is formed. 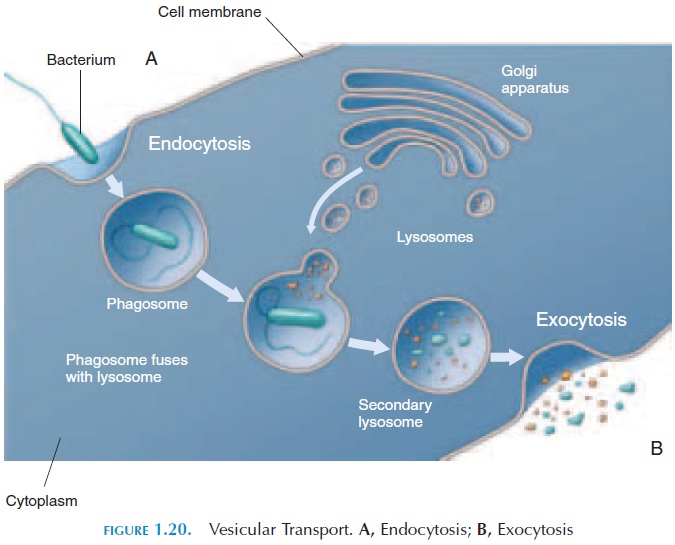 After endocytosis, at times, the contents are di-gested by enzymes (stored in vesicles) present in the cytoplasm. This process is known as phagocytosis (cell eating). Most defense cells kill microorganisms by phagocytosis.

Exocytosis is the opposite of endocytosis (see Fig-ure 1.20B). Here, vesicles floating in the cytoplasm fuse with the cell membrane and extrude their con-tents into the extracellular fluid. Mucus secretion, se-cretory products of certain glands, and nerve endings extrude the contents of vesicles in this way.

Active transport (Figure 1.19) is the transport of sub-stances into or out of the cell using energy. Energy is needed for this kind of transport because it occurs against the concentration gradient, unlike diffusion. The carriers involved in this transport are referred to as ion pumps. All cells have specific ion pumps that transport sodium, potassium, calcium, and magne-sium. Ion pumps are specific (i.e., a pump is specific for one ion). There are certain pumps that transport one ion inside as another is sent outside. These spe-cial carrier proteins are known as exchange pumps. The most common exchange pump is the sodium–potassium exchange pump, or sodium–potassium ATPase.

Normally, the extracellular fluid has more sodium than the inside of the cell; potassium is the opposite. Sodium tends to diffuse in slowly along its concen-tration gradient, while potassium moves out. To maintain homeostasis, the sodium–potassium pump uses energy to pump out sodium and pump in potas-sium. This pump uses energy by consuming about 40% of the ATP produced in a resting cell.

All cells have more negative charges inside as com-pared with the outside. This difference in charges is maintained by the presence of a cell membrane that is selectively permeable and ionic pumps that move substances by active transport. This difference in electrical charge is known as the transmembranepotential. Transmembrane potential is measured inmillivolts (mV). The membrane potential of a neuron, for example, is 70 mV. The maintenance of trans-membrane potential is important, as it is required for many functions, such as transmission of nerve im-pulses, muscle contraction, and gland secretion.