The spectrometer is an optical instrument used to study the spectra of different sources of light and to measure the refractive indices of materials. It

The spectrometer is an optical instrument used to study the spectra of different sources of light and to measure the refractive indices of materials. It is shown in Figure 6.90. It consists of basically three parts. They are (i) collimator (ii) prism table and (iii) Telescope. 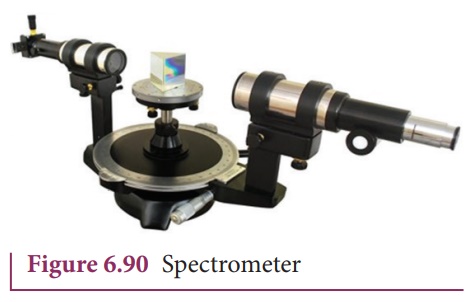 The prism table is used for mounting the prism, grating etc. It consists of two circular metal discs provided with three levelling screws. It can be rotated about a vertical axis passing through its centre and its position can be read with verniers V1 and V2 . The prism table can be raised or lowered and can be fixed at any desired height.

The telescope is an astronomical type. It consists of an eyepiece provided with cross wires at one end and an objective lens at its other end. The distance between the objective lens and the eyepiece can be adjusted so that the telescope forms a clear image at the cross wires, when a parallel beam from the collimator is incident on it.

The following adjustments must be made before doing the experiment using spectrometer.

(a) Adjustment of the eyepiece The telescope is turned towards an illuminated surface and the eyepiece is moved to and fro until the cross wires are clearly seen.

(b) Adjustment of the telescope The telescope is adjusted to receive parallel rays by turning it towards a distant object and adjusting the distance between the objective lens and the eyepiece to get a clear image on the cross wire.

(d) Levelling the prism table The prism table is adjusted or levelled to be in horizontal position by means of levelling screws and a spirit level.

Determination of refractive index of material of the prism 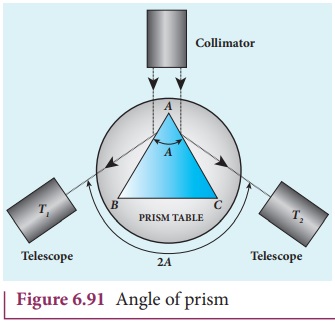 The prism is placed on the prism table so that the light from the collimator falls on a refracting face, and the refracted image is observed through the telescope as shown in Figure 6.92. The prism table is now rotated so that the angle of deviation decreases. A stage comes when the image stops for a moment and if we rotate the prism table further in the same direction, the image is seen to recede and the angle of deviation increases. The vertical cross wire of the telescope is made to coincide with the image of the slit where it turns back. This gives the minimum deviation position. 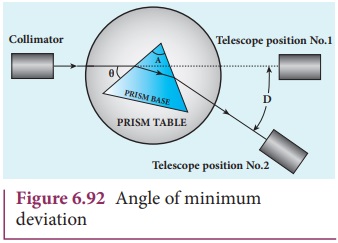 The readings of the verniers are noted. Now, the prism is removed and the telescope is turned to receive the direct ray and the vertical cross wire is made to coincide with the image. The readings of the verniers are noted. The difference between the two readings gives the angle of minimum deviation D. The refractive index of the material of the prism n is calculated using the formula,

The refractive index of a liquid may be determined in the same way using a hollow glass prism filled with the given liquid. Spectrometer experiments are discussed in the Practicals given in Volume 1 of this book.