The single electrode potential of a half-cell depends on : (a) concentration of ions in solution ; (b) tendency to form ions ; and (c) temperature.

Standard emf of a cell

Determination of emf of a half-cell

If the standard half-cell acts as anode, the equation becomes

On the other hand, if standard half-cell is cathode, the equation takes the form

The emf of the standard hydrogen electrode is arbitrarily assigned the value of zero volts. So, SHE can be used as a standard for other electrodes. 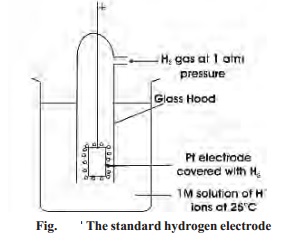 For example, it is desired to determine the emf of the zinc electrode, Zn | Zn2+. It is connected with the SHE. The complete electrochemical cell may be represented as :

The emf of the cell has been found to be -0.76 V which is the emf the zinc half-cell. Similarly, the emf of the copper electrode, Cu2+ | Cu can be determined by pairing it with the SHE when the electrochemical cell can be represented as :

The emf of this cell has been determined to be 0.34 V which is the emf of the copper half-cell.

The two situations are explained as follows :

When it is placed on the right-hand side of the zinc electrode, the hydrogen electrode reaction is

The electrons flow to the SHE and it acts as the cathode.

When the SHE is placed on the left hand side, the electrode reaction is

The electrons flow to the copper electrode and the hydrogen electrode

as the anode. Evidently, the SHE can act both as anode and cathode and, therefore can be used to determine the emf of any other half-cell electrode (or single electrode).

Let us predict the emf of the cell

by using the Eo values from the table. 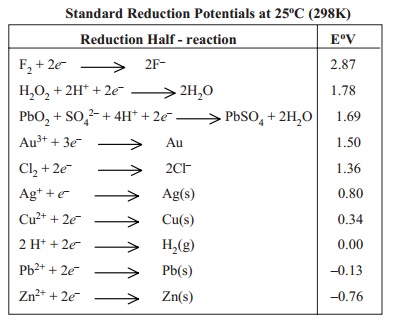 The feasibility of a redox reaction can be predicted with the help of the electrochemical series. The net emf of the cell reaction, Ecell, can be calculated from the expression

In general, if Eocell = + ve, the reaction is feasible

Eo cell = -ve, the reaction is not feasible 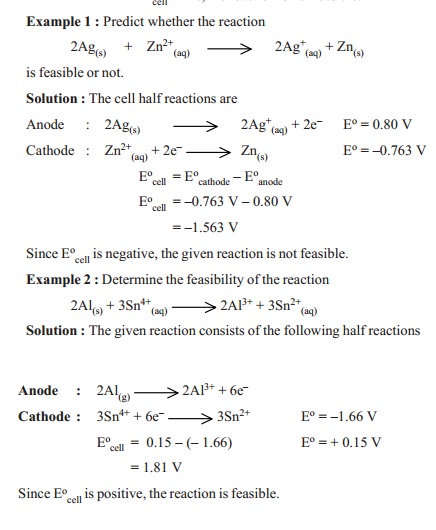