Quaternary structure is the final level of protein structure and pertains to proteins that consist of more than one polypeptide chain.

Quaternary structure is the final level of protein structure and pertains to proteins that consist of more than one polypeptide chain. Each chain is called a subunit. The number of chains can range from two to more than a dozen, and the chains may be identical or different. Commonly occurring examples are dimers, trimers, and tetramers, consisting of two, three, and four polypeptidechains, respectively. (The generic term for such a molecule, made up of a small number of subunits, is oligomer.) The chains interact with one another noncovalently via electrostatic attractions, hydrogen bonds, and hydrophobic interactions.

As a result of these noncovalent interactions, subtle changes in structure at one site on a protein molecule may cause drastic changes in properties at a distant site. Proteins that exhibit this property are called allosteric. Not all multisubunit proteins exhibit allosteric effects, but many do.

A classic illustration of the quaternary structure and its effect on protein properties is a comparison of hemoglobin, an allosteric protein, with myoglo-bin, which consists of a single polypeptide chain.

Hemoglobin is a tetramer, consisting of four polypeptide chains, two α-chains, and two β-chains (Figure 4.21). (In oligomeric proteins, the types of polypeptide chains are designated with Greek letters. In this case, the terms a and b have nothing to do with the α-helix and the β-pleated sheet; rather they just refer to two different polypeptide chain subunits.) The two α-chains of hemoglobin are identical, as are the two β-chains. The overall structure of hemoglobin is a2b2 in Greek-letter notation. Both the α- and β-chains of hemoglobin are very similar to the myoglobin chain. The α-chain is 141 residues long, and the β-chain is 146 residues long; for comparison, the myoglobin chain is 153 residues long. Many of the amino acids of the α-chain, the β-chain, and myoglobin are homologous; that is, the same amino acid residues are in the same positions. The heme group is the same in myoglobin and hemoglobin. 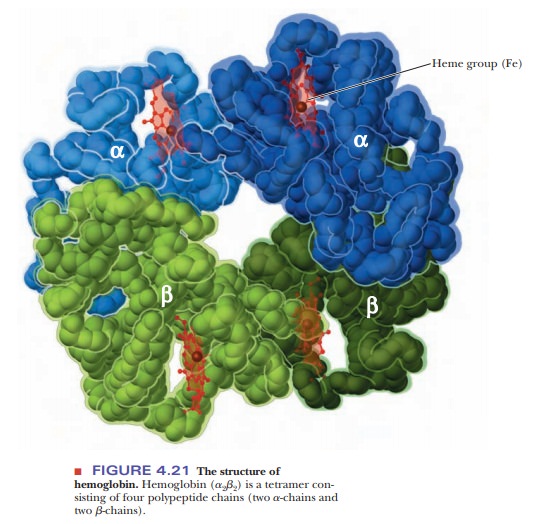 We have already seen that one molecule of myoglobin binds one oxygen molecule. Four molecules of oxygen can therefore bind to one hemoglobin molecule. Both hemoglobin and myoglobin bind oxygen reversibly, but the binding of oxygen to hemoglobin exhibits positive cooperativity, whereas oxy-gen binding to myoglobin does not. Positive cooperativity means that when one oxygen molecule is bound, it becomes easier for the next to bind. A graph of the oxygen-binding properties of hemoglobin and myoglobin is one of the best ways to illustrate this point (Figure 4.22). 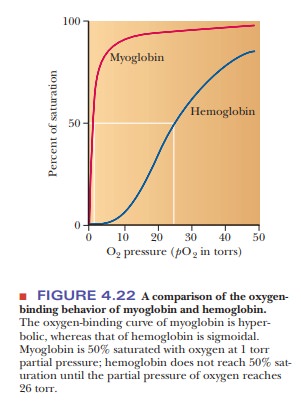 How does hemoglobin work?

The two different types of behavior exhibited by myoglobin and hemoglobin are related to the functions of these proteins. Myoglobin has the function of oxygen storage in muscle. It must bind strongly to oxygen at very low pressures, and it is 50% saturated at 1 torr partial pressure of oxygen. (The torr is a widely used unit of pressure, but it is not an SI unit. One torr is the pressure exerted by a column of mercury 1 mm high at 0°C. One atmosphere is equal to 760 torr.)

The function of hemoglobin is oxygen transport, and it must be able both to bind strongly to oxygen and to release oxygen easily, depending on conditions. In the alveoli of lungs (where hemoglobin must bind oxygen for transport to the tissues), the oxygen pressure is 100 torr. At this pressure, hemoglobin is 100% saturated with oxygen. In the capillaries of active muscles, the pressure of oxygen is 20 torr, corresponding to less than 50% saturation of hemoglobin, which occurs at 26 torr. In other words, hemoglobin gives up oxygen easily in capillaries, where the need for oxygen is great.

Other ligands are involved in cooperative effects when oxygen binds to hemoglobin. Both H+ and CO2, which themselves bind to hemoglobin, affect the affinity of hemoglobin for oxygen by altering the protein’s three-dimensional structure in subtle but important ways. The effect of H+ (Figure 4.24) is called the Bohr effect, after its discoverer, Christian Bohr (the father of physicist Niels Bohr). The oxygen-binding ability of myoglobin is not affected by the presence of H+ or of CO2.

An increase in the concentration of H+ (i.e., a lowering of the pH) reduces the oxygen affinity of hemoglobin. Increasing H+ causes the protonation of key amino acids, including the N-terminals of the α-chains and His146 of the β-chains. The protonated histidine is attracted to, and stabilized by, a salt bridge to Asp94. This favors the deoxygenated form of hemoglobin. Actively metaboliz-ing tissue, which requires oxygen, releases H+, thus acidifying its local environ-ment. Hemoglobin has a lower affinity for oxygen under these conditions, and it releases oxygen where it is needed (Figure 4.25). Hemoglobin’s acid–base properties affect, and are affected by, its oxygen-binding properties. The oxygenated form of hemoglobin is a stronger acid (has a lower pKa) than the deoxygenated form. In other words, deoxygenated hemoglobin has a higher affinity for H+ than does the oxygenated form. Thus, changes in the quaternary structure of hemoglobin can modulate the buffering of blood through the hemoglobin molecule itself. 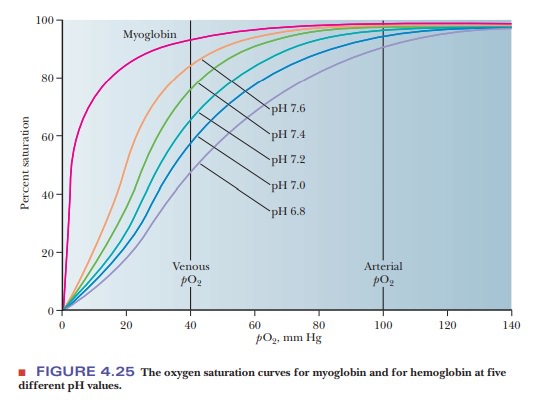 Table 4.1 summarizes the important features of the Bohr effect.

Large amounts of CO2 are produced by metabolism. The CO2, in turn, forms carbonic acid, H2CO3. The pKa of H2CO3 is 6.35; the normal pH of blood is 7.4. As a result, about 90% of dissolved CO2 will be present as the bicarbonate ion, HCO3–, releasing H+. (The Henderson–Hasselbalch equation can be used to confirm this point.) The in vivo buffer system involving H2CO3 and HCO3– in blood. The presence of larger amounts of H+ as a result of CO2 production favors the quaternary structure that is characteristic of deoxygenated hemoglobin. Hence, the affinity of hemoglobin for oxygen is lowered. The HCO3– is transported to the lungs, where it combines with H+ released when hemoglobin is oxygenated, producing H2CO3. In turn, H2CO3 liberates CO2, which is then exhaled. Hemoglobin also transports some CO2 directly. When the CO2 concentration is high, it combines with the free α-amino groups to form carbamate:

This reaction turns the α-amino terminals into anions, which can then interact with the α-chain Arg141, also stabilizing the deoxygenated form.

Hemoglobin in blood is also bound to another ligand, 2,3-bisphosphoglycerate(BPG) (Figure 4.26), with drastic effects on its oxygen-binding capacity. Thebinding of BPG to hemoglobin is electrostatic; specific interactions take place between the negative charges on BPG and the positive charges on the protein (Figure 4.27). 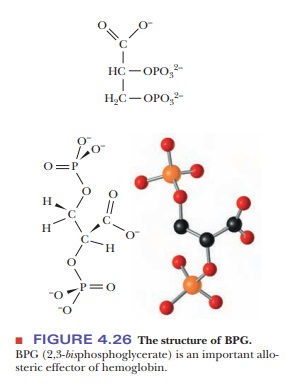 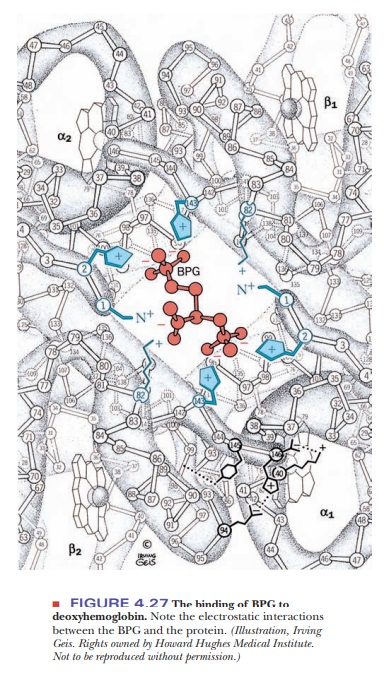 In the presence of BPG, the partial pressure at which 50% of hemoglobin is bound to oxygen is 26 torr.

If BPG were not present in blood, the oxygen-binding capacity of hemoglobin would be much higher (50% of hemoglobin bound to oxygen at about 1 torr), and little oxygen would be released in the capillaries. “Stripped” hemoglobin, which is isolated from blood and from which the endogenous BPG has been removed, displays this behavior (Figure 4.28). 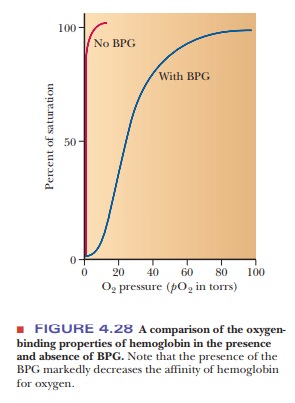 BPG also plays a role in supplying a growing fetus with oxygen. The fetus obtains oxygen from the mother’s bloodstream via the placenta. Fetal hemo-globin (Hb F) has a higher affinity for oxygen than does maternal hemoglobin, allowing for efficient transfer of oxygen from the mother to the fetus (Figure 4.29). Two features of fetal hemoglobin contribute to this higher oxygen-binding capacity. One is the presence of two different polypeptide chains. The subunit structure of Hb F is a2g2, where the β-chains of adult hemoglobin (Hb A), the usual hemoglobin, have been replaced by the γ-chains, which are simi-lar but not identical in structure. The second feature is that Hb F binds less strongly to BPG than does Hb A. In the β-chain of adult hemoglobin, His143 makes a salt bridge to BPG. In the fetal hemoglobin, the γ-chain has an amino acid substitution of a serine for His143. This change of a positively charged amino acid for a neutral one diminishes the number of contacts between the hemoglobin and the BPG, effectively reducing the allosteric effect enough to give fetal hemoglobin a higher binding curve than adult hemoglobin. 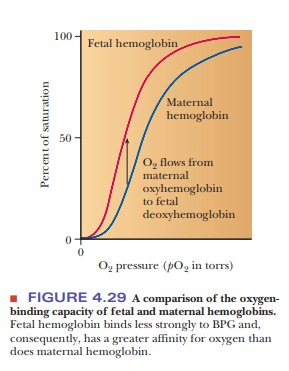 Another type of hemoglobin that has been studied extensively is sickle-cell hemoglobin, Hb S. In Hb S, the β-chains have a single amino acid substitution of a glutamic acid for a valine. This substitution of a nonpolar amino acid for a polar one causes the characteristic effects of the disease. The nonpolar amino acid is on the surface and leads to aggregation of the molecules through non-polar interactions. These aggregations lead to the sickling of the blood cells. 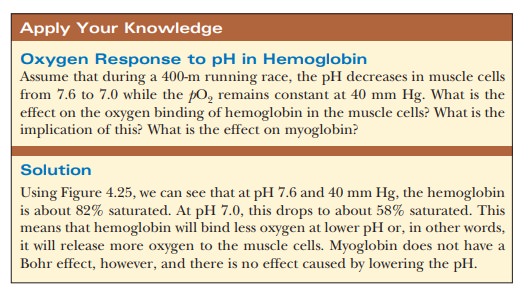 Quaternary structure is the final level of protein structure and pertains to those proteins that consist of multiple polypeptide chains. Each chain is called a subunit.

Subunits interact with each other through non-covalent interactions.

Some proteins with multiple subunits are allosteric, which means that the subunits interact such that binding of a ligand to one subunit affects the binding of ligands to other subunits.

Hemoglobin is a classic example of protein quaternary structure. The protein has 4 subunits, two α-chains and two β-chains, and it exhibits positive cooperativity. Binding of oxygen to one subunit makes it easier for oxygen to bind to other subunits.