Myoglobin: An Example of Protein Structure 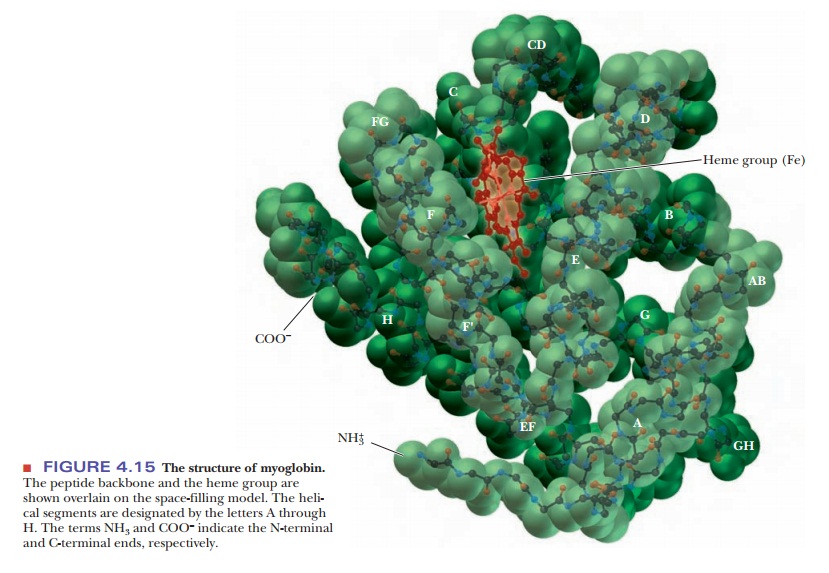 Why does oxygen have imperfect binding to the heme group?

Myoglobin: An Example of Protein Structure

In many ways, myoglobin is the classic example of a globular protein. We shall use it here as a case study in tertiary structure. (We shall see the tertiary structures of many other proteins in context when we discuss their roles in biochemistry.) Myoglobin was the first protein for which the complete tertiary structure (Figure 4.15) was determined by X-ray crystallography. The complete myoglobin molecule consists of a single polypeptide chain of 153 amino acid residues and includes a prosthetic group, the heme group, which also occurs in hemoglobin. The myoglobin molecule (including the heme group) has a compact structure, with the interior atoms very close to each other. This structure provides examples of many of the forces responsible for the three-dimensional shapes of proteins. 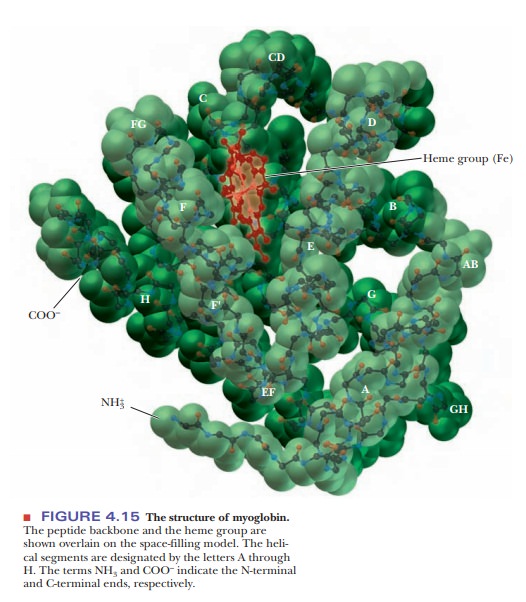 Myoglobin has eight α-helical regions and no β-pleated sheet regions. Approximately 75% of the residues in myoglobin are found in these helical regions, which are designated by the letters A through H. Hydrogen bonding in the polypeptide backbone stabilizes the α-helical regions; amino acid side chains are also involved in hydrogen bonds. The polar residues are on the exterior of the molecule.

The interior of the protein contains almost exclu-sively nonpolar amino acid residues. Two polar histidine residues are found in the interior; they are involved in interactions with the heme group and bound oxygen, and thus play an important role in the function of the molecule. The planar heme group fits into a hydrophobic pocket in the protein portion of the molecule and is held in position by hydrophobic attractions between heme’s porphyrin ring and the nonpolar side chains of the protein. The presence of the heme group drastically affects the conformation of the polypeptide: The apoprotein (the polypeptide chain alone, without the prosthetic heme group) is not as tightly folded as the complete molecule.

The heme group consists of a metal ion, Fe(II), and an organic part, pro-toporphyrin IX (Figure 4.16). (The notation Fe(II) is preferred to Fe2+ when metal ions occur in complexes.) The porphyrin part consists of four five-membered rings based on the pyrrole structure; these four rings are linked by bridging methine (-CH==) groups to form a square planar structure. The Fe(II) ion has six coordination sites, and it forms six metal–ion complexation bonds. Four of the six sites are occupied by the nitrogen atoms of the four pyr-role-type rings of the porphyrin to give the complete heme group. The pres-ence of the heme group is required for myoglobin to bind oxygen. 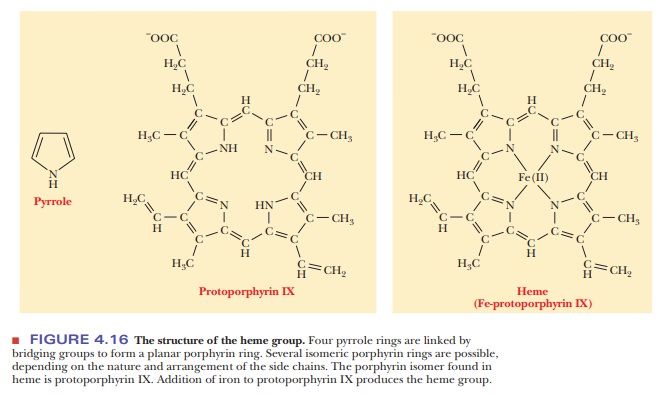 The fifth coordination site of the Fe(II) ion is occupied by one of the nitrogen atoms of the imidazole side chain of histidine residue F8 (the eighth residue in helical segment F). This histidine residue is one of the two in the interior of the molecule. The oxygen is bound at the sixth coordination site of the iron. The fifth and sixth coordination sites lie perpendicular to, and on opposite sides of, the plane of the porphyrin ring. The other histidine residue in the interior of the molecule, residue E7 (the seventh residue in helical seg-ment E), lies on the same side of the heme group as the bound oxygen (Figure 4.17). This second histidine is not bound to the iron, or to any part of the heme group, but it acts as a gate that opens and closes as oxygen enters the hydro-phobic pocket to bind to the heme. The E7 histidine sterically inhibits oxygen from binding perpendicularly to the heme plane, with biologically important ramifications. 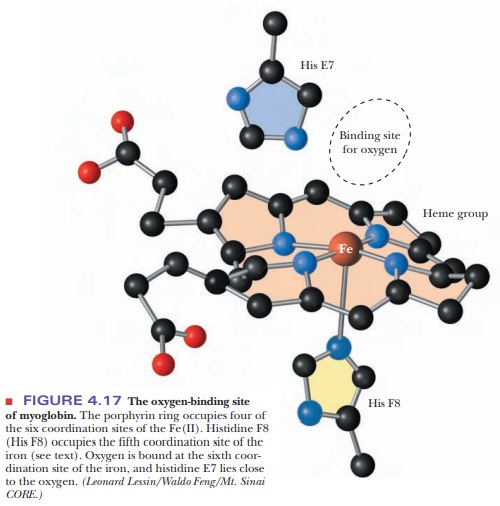 Why does oxygen have imperfect binding to the heme group?

At first, it would seem counterintuitive that oxygen would bind imperfectly to the heme group. After all, the job of both myoglobin and hemoglobin is to bind to oxygen. Wouldn’t it make sense that oxygen should bind strongly? The answer lies in the fact that more than one molecule can bind to heme. Besides oxygen, carbon monoxide also binds to heme. The affinity of free heme for carbon monoxide (CO) is 25,000 times greater than its affinity for oxygen. When carbon monoxide is forced to bind at an angle in myoglobin because of the steric block by His E7, its advantage over oxygen drops by two orders of magnitude (Figure 4.18). This guards against the possibility that traces of CO produced during metabolism would occupy all the oxygen-binding sites on the hemes. Nevertheless, CO is a potent poison in larger quantities because of its effect both on oxygen binding to hemoglobin and on the final step of the electron transport chain. It is also important to remember that although our metabolism requires that hemoglobin and myoglobin bind oxygen, it would be equally disastrous if the heme never let the oxygen go. Thus having binding be too perfect would defeat the purpose of having the oxygen-carrying proteins. 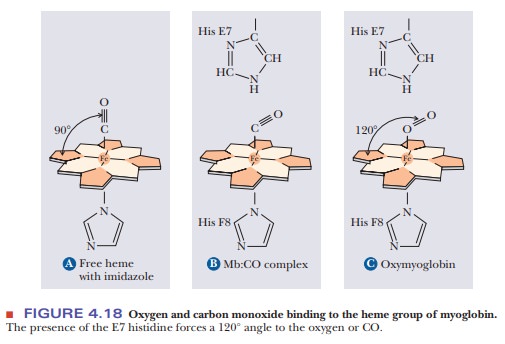 In the absence of the protein, the iron of the heme group can be oxidized to Fe(III); the oxidized heme will not bind oxygen. Thus, the combination of both heme and protein is needed to bind O2 for oxygen storage.