The noncovalent interactions that maintain the three-dimensional structure of a protein are weak, and it is not surprising that they can be disrupted easily.

The noncovalent interactions that maintain the three-dimensional structure of a protein are weak, and it is not surprising that they can be disrupted easily.

Proteins can be denatured in several ways. One is heat. An increase in tem-perature favors vibrations within the molecule, and the energy of these vibra-tions can become great enough to disrupt the tertiary structure. At either high or low extremes of pH, at least some of the charges on the protein are missing, and so the electrostatic interactions that would normally stabilize the native, active form of the protein are drastically reduced. This leads to denaturation. 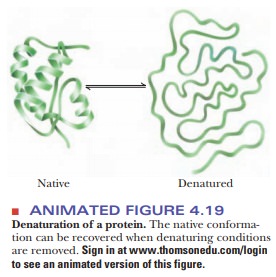 b-Mercaptoethanol (HS-CH2-CH2-OH) is frequently used to reduce disul-fide bridges to two sulfhydryl groups. Urea is usually added to the reaction mixture to facilitate unfolding of the protein and to increase the accessibility of the disulfides to the reducing agent. If experimental conditions are properly chosen, the native conformation of the protein can be recovered when both mercaptoethanol and urea are removed (Figure 4.20). Experiments of this type provide some of the strongest evidence that the amino acid sequence of the protein contains all the information required to produce the complete three-dimensional structure. Protein researchers are pursuing with some interest the conditions under which a protein can be denatured-including reduction of disulfides-and its native conformation later recovered.