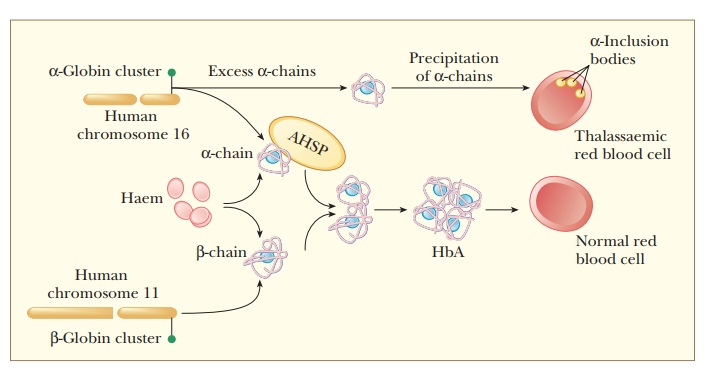 To help avoid the protein misfolding problem, special proteins called chaperones aid in the correct and timely folding of many proteins.

To help avoid the protein misfolding problem, special proteins called chaperones aid in the correct and timely folding of many proteins. The first such proteins discovered were a family called hsp70 (for 70,000 MW heat-shock protein), which are proteins produced in E. coligrown above optimal temperatures. Chaperones exist in organisms from prokaryotes through humans, and their mechanisms of action are currently being studied. It is becoming more and more evident that protein folding dynamics are crucial to protein function in vivo. 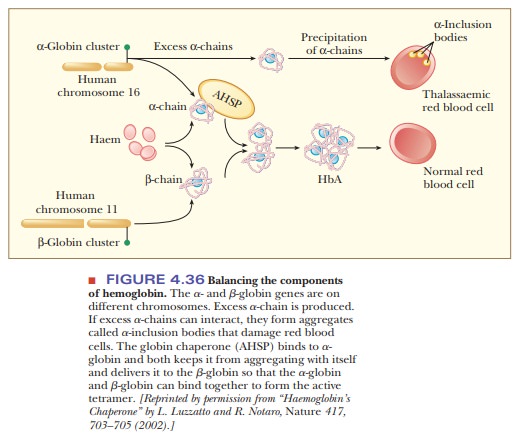 In the blood, hemoglobin accumulates to a level of 340 g/L, which is a very large amount of a single protein. The control of globin gene expression is complicated and made more so by the fact that there are separate genes for the α-chain and the β-chain, and they are found on different chromosomes. There are also two α-globin genes for every β-globin gene, so there is always an excess of the α-chain. Excess α-chains can form aggregates as shown in Figure 4.36, which could lead to damaged red blood cells and a disease called thalas-semia.Thea-chains can also form aggregates among themselves, leading to auseless form of hemoglobin. The secret to success for hemoglobin production is to maintain the proper stoichiometry between the two types of globin chains. The α-chains must be kept from aggregating together so that there will be enough α-chain to complex with the β-chain. In this way the α-chains will be occupied with β-chains and will not form α-chain aggregates. Fortunately, there is a specific chaperone for the α-chain, called α-hemoglobin stabilizing protein (AHSP). This chaperone prevents the α-chains from causing the damage to blood cells as well as delivering them to the β-chains.

Protein folding is a very hot topic in biochemistry today. The following Biochemical Connections box describes a particularly striking example of the importance of protein folding.