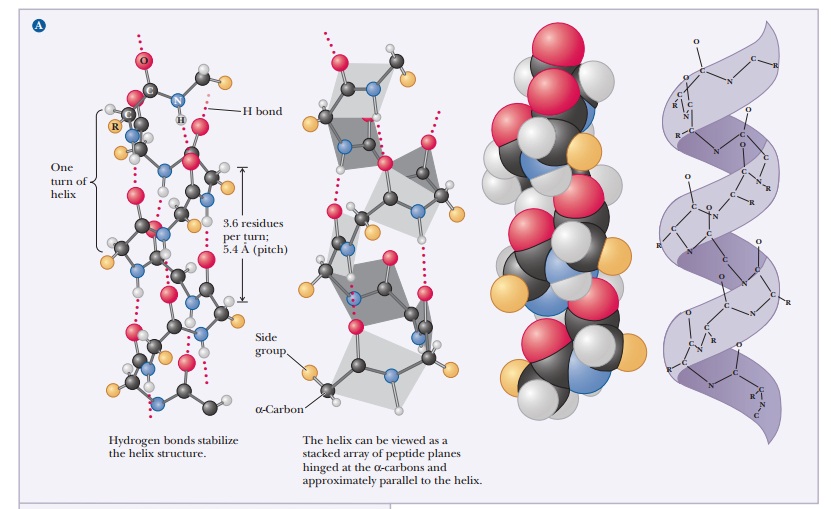 Why is the A-helix so prevalent? How is the B-sheet different from the A-helix?

Why is the A-helix so prevalent?

The α-helix is stabilized by hydrogen bonds parallel to the helix axis within the backbone of a single polypeptide chain. Counting from the N-terminal end, the C-O group of each amino acid residue is hydrogen bonded to the N-H group of the amino acid four residues away from it in the covalently bonded sequence. The helical conformation allows a linear arrangement of the atoms involved in the hydrogen bonds, which gives the bonds maximum strength and thus makes the helical conformation very stable. There are 3.6 residues for each turn of the helix, and the pitch of the helix (the linear distance between corresponding points on successive turns) is 5.4 Å (Figure 4.2). 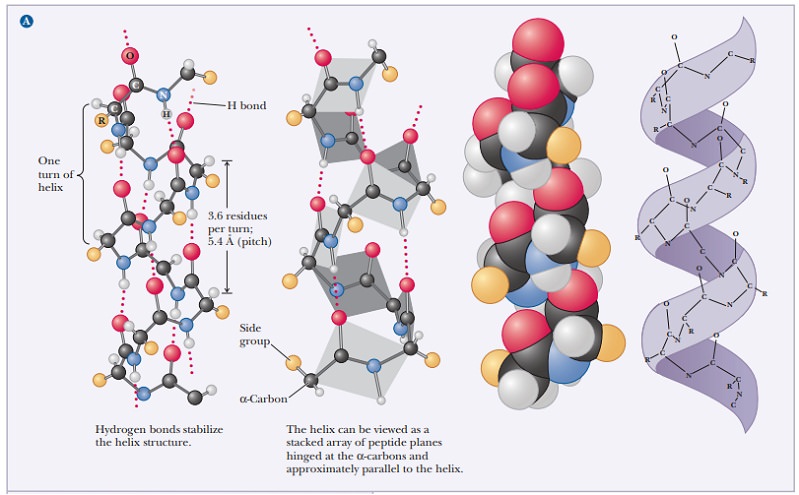 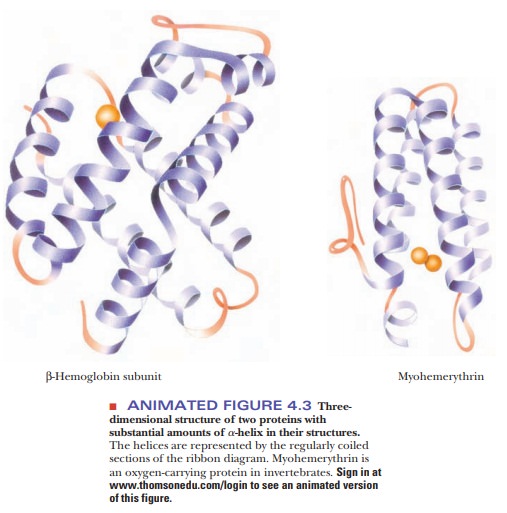 Proteins have varying amounts of α-helical structures, varying from a few percent to nearly 100%. Several factors can disrupt the α-helix. The amino acid proline creates a bend in the backbone because of its cyclic structure. It cannot fit into the α-helix because (1) rotation around the bond between the nitrogen and the α-carbon is severely restricted, and (2) proline’s α-amino group cannot participate in intrachain hydrogen bonding. Other localized factors involving the side chains include strong electrostatic repulsion owing to the proximity of several charged groups of the same sign, such as groups of positively charged lysine and arginine residues or groups of negatively charged glutamate and aspartate residues. Another possibility is crowding (steric repulsion) caused by the proximity of several bulky side chains. In the α-helical conformation, all the side chains lie outside the helix; there is not enough room for them in the interior. The α-carbon is just outside the helix, and crowding can occur if it is bonded to two atoms other than hydrogen, as is the case with valine, isoleucine, and threonine.

How is the B-sheet different from the A-helix?

The arrangement of atoms in the β-pleated sheet conformation differs markedly from that in the α-helix. The peptide backbone in the β-sheet is almost completely extended. Hydrogen bonds can be formed between different parts of a single chain that is doubled back on itself (intrachain bonds) or between different chains (interchain bonds). If the peptide chains run in the same direction (i.e., if they are all aligned in terms of their N-terminal and C-terminal ends), a parallel pleated sheet is formed. 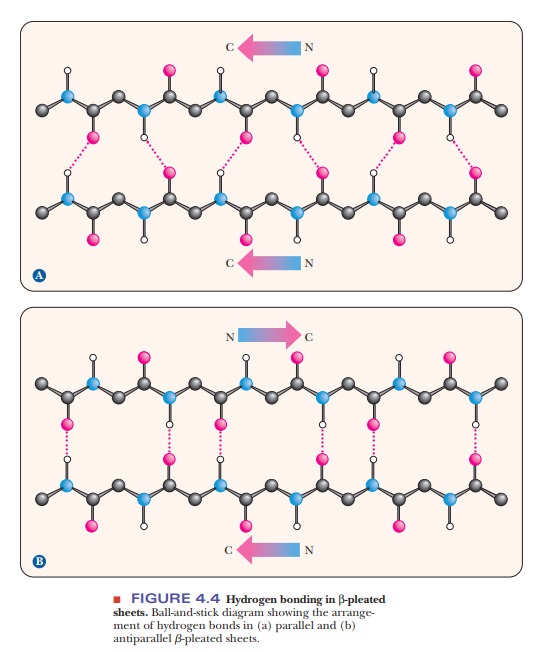 When alternating chains run in opposite directions, an antiparallel pleated sheet is formed (Figure 4.4). The hydrogen bonding between peptide chains in the β-pleated sheet gives rise to a repeated zigzag structure; hence, the name “pleated sheet” (Figure 4.5). Note that the hydrogen bonds are perpendicular to the direction of the protein chain, not parallel to it as in the α-helix.