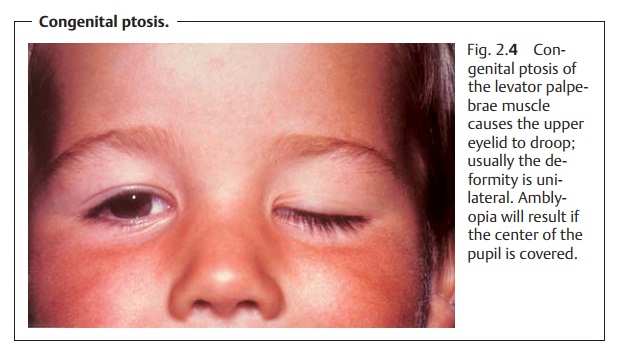 Paralysis of the levator palpebrae muscle with resulting drooping of one or both upper eyelids (from the Greek ptosis, a falling).

Paralysis of the levator palpebrae muscle with resulting drooping of one or both upper eyelids (from the Greek ptosis, a falling). The following forms are differentiated according to their origin (see also Etiology): 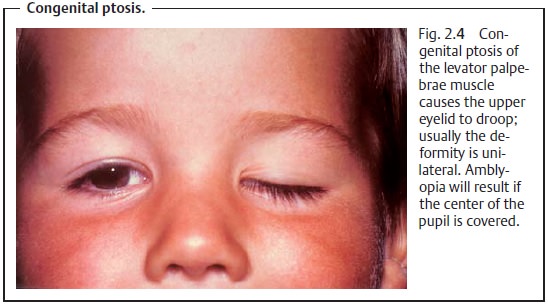 Epidemiology.On the whole ptosis is a rare disorder.

Etiology: Ptosis may be congenital or acquired.

Congenital ptosis.The disorder is usually hereditary and is primarily auto-somal dominant as opposed to recessive. The cause is frequently aplasia in the core of the oculomotor nerve (neurogenic) that supplies the levator palpe-brae muscle; less frequently it is attributable to an underdeveloped levatorpalpebrae muscle (myogenic).

❖ Traumatic ptosis can occur after injuries.

Symptoms.The drooping of the upper eyelid may beunilateral(usually a signof a neurogenic cause) or bilateral (usually a sign of a myogenic cause). A characteristic feature of the unilateral form is that the patient attempts to increase the palpebral fissure by frowning (contracting the frontalis muscle). Congenital ptosis (Fig. 2.4) generally affects one eye only; bilateral symptomsare observed far less frequently (7%).

Diagnostic considerations: Congenital ptosis.The affected eyelid in generalis underdeveloped. The skin of the upper eyelid is smooth and thin; the supe-rior palpebral furrow is absent or ill-defined. A typical symptom is “lid lag” in which the upper eyelid does not move when the patient glances down. Thisimportant distinguishing symptom excludes acquired ptosis in differential diag-nosis. In about 3% of all cases, congenital ptosis is associated with epicanthalfolds and blepharophimosis (Waardenburg syndrome).

Congenital ptosis can occur in varying degrees of severity and may be com-plicated by the presence of additional eyelid and ocular muscle disorders such as strabismus.

Congenital ptosis in which the upper eyelid droops over the center of the pupil always involves an increased risk of amblyopia.

❖ Paralytic ptosis in oculomotor palsy is usually unilateralwith the drooping eyelid covering the whole eye. Often there will be other signs of palsy in the area supplied by the oculomotor nerve. In externaloculomotor palsy, only the extraocular muscles are affected (mydriasis willnot be present), whereas in complete oculomotor palsy, the inner ciliary muscle and the sphincter pupillae muscle are also affected (internal oph-thalmoplegia with loss of accommodation, mydriasis, and complete loss of pupillary light reflexes).

❖  Myasthenia gravis (myogenic ptosis that is often bilateral and may beasymmetrical) is associated with abnormal fatigue of the striatedvextraocular muscles. Ptosis typically becomes more severe as the day goes on.

Rapidly opening and closing the eyelids provokes ptosis in myasthenia gravis and simplifies the diagnosis.

❖ Congenital ptosis: This involves surgical retraction of the upper eyelid(Fig. 2.5a – c), which should be undertaken as quickly as possible when there is a risk of the affected eye developing a visual impairment as a result of the ptosis. 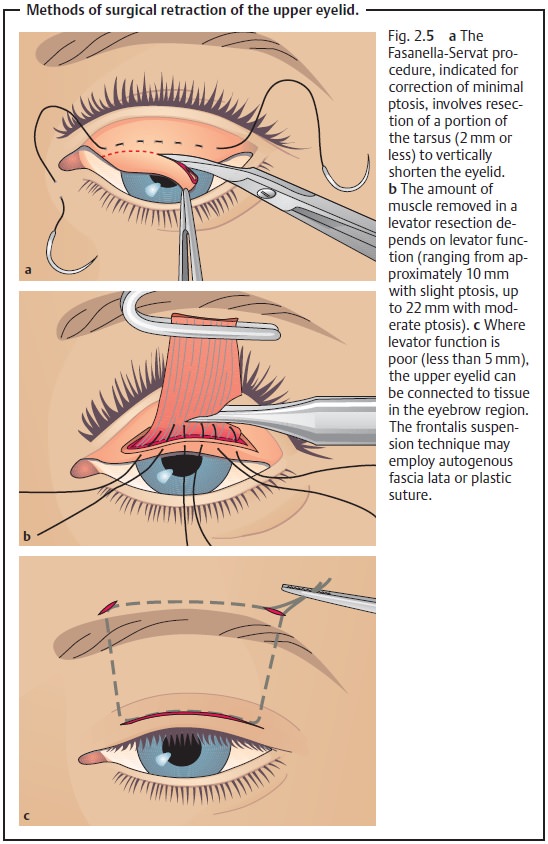 ❖ Acquired ptosis: Treatment depends on the cause. As palsies oftenresolvespontaneously, the patient should be observed before resorting to surgica

intervention. Conservative treatment with special eyeglasses may be suffi-cient even in irreversible cases.

Because of the risk of overcorrecting or undercorrecting the disorder, several operations may be necessary.

Prognosis and complications: Prompt surgical intervention in congenitalptosis can prevent amblyopia. Surgical overcorrection of the ptosis can lead to desiccation of the conjunctiva and cornea with ulceration as a result of incomplete closure of the eyelids.