Disorders of the Skin and Margin of the Eyelid

Disorders of the Skin and Margin of the Eyelid

Etiology: Contact eczema is caused by an antigen – antibody reaction inpatients with intolerance to certain noxious substances. Cosmetics, adhesivebandages, or eyedrops and eye ointments are often responsible, particularlythe preservatives used in them such as benzalkonium chloride.

Symptoms: Reddening, swelling, lichenification, and severe itching of theskin of the eyelid occur initially, followed by scaling of the indurated skin with a sensation of tension (Fig. 2.10). 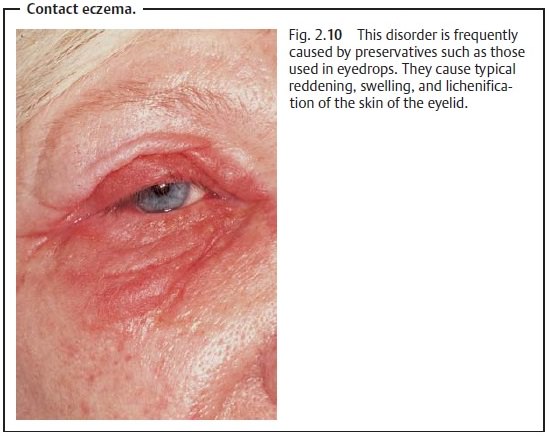 Treatment: This consists of eliminating the causative agent. (Allergy testingmay be necessary.) Limited use of corticosteroids usually brings quick relief of symptoms.

Prognosis: The prognosis is good if the cause can be identified.

This refers to swelling of the eyelid due to abnormal collection of fluid in the subcutaneous tissue.

Etiology: The skin of the eyelid is affected intensively by infectious and aller-gic processes. With the upper eyelid’s relatively thin skin and the loose struc-ture of its subcutaneous tissue, water can easily accumulate and cause edema. 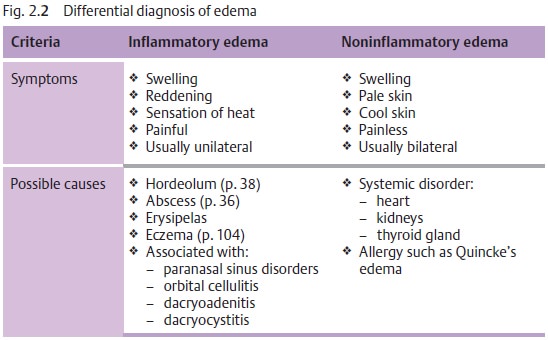 Symptoms: Depending on the cause (Table 2.2), the intensity of swelling inthe eyelid will vary. The location of swelling is also influenced by gravity and can vary in intensity. For example, it may be more intense in the early morn-ing after the patient rises than in the evening (Fig. 2.11). 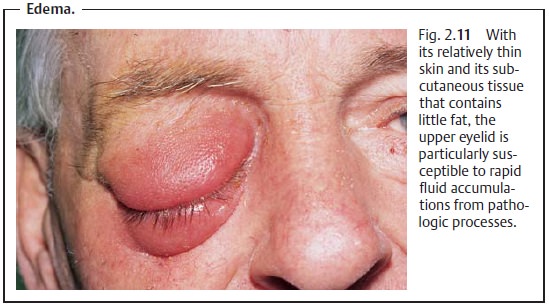 Table 2.2 shows the causes and differential diagnosis for inflammatory and noninflammatory edemas.

Treatment: This depends on the cause of the disorder.

Clinical course and prognosis: This depends on the underlying disorder.

This relatively frequent disorder is characterized by scaly inflammation of the margins of the eyelids. Usually both eyes are affected.

Etiology: There are oftenseveral contributing causes. The constitution of theskin, seborrhea, refractive anomalies, hypersecretion of the eyelid glands, and external stimuli such as dust, smoke, and dry air in air-conditioned rooms often contribute to persistent chronic inflammation.

Symptoms and diagnostic considerations: The margins of the eyelids usu-ally exhibit slight inflammatory changes such as thickening. The eyelashes adhere due to the increased secretion from the glands of the eyelids, and scalydeposits form (Fig. 2.12). The disorder will often be accompanied by chronicconjunctivitis. 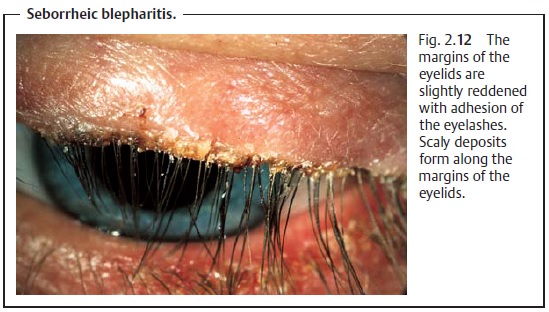 Treatment: This depends on the cause of the disorder (see Etiology). Thescales and crusts can usually be softened with warm olive oil and then easily removed with a cotton-tipped applicator. In more severe cases, recommended treatment includes expressing the glands of the eyelid and local application of antibiotic ointment. Treatment with topical steroids may be indicated under certain conditions.

Prognosis: The prognosis is good although the clinical course of the disorderis often quite protracted.

Herpes Simplex of the Eyelids

Etiology: Infection of the skin of the eyelids results when latent herpes sim-plex viruses present in the tissue are activated by ultraviolet radiation. The virus spreads along sensory nerve fibers from the trigeminal ganglion to the surface of the skin.

Symptoms: Typicalclustered eruptionsof painfulvesiclesfilled with serousfluid frequently occur at the junction of mucous membranes and skin (Fig. 2.13). Later the vesicles dry and crusts form. Lesions heal without scar-ring. The disorder is usually unilateral. 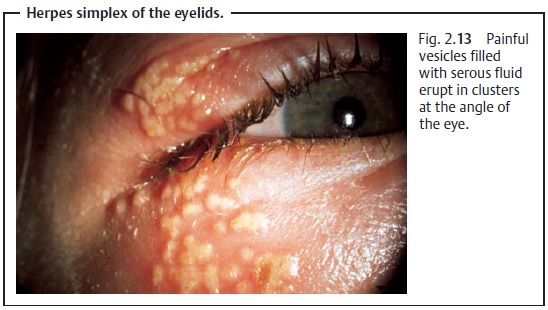 Treatment: Topical use of virostatic agents is indicated. The patient shouldavoid intense ultraviolet radiation as a prophylactic measure against recur-rence.

Prognosis: The prognosis is good, although the disorder frequently recurs.

Epidemiology: The disorder usually affects immunocompromised personsbetween the ages of 40 and 60 who have underlying disorders.

Etiology: The disorder is caused by the varicella-zoster virus, which initiallymanifests itself as chickenpox. If activation or reinfection occurs, the latent neurotropic viruses present in the body can lead to the clinical syndrome of herpes zoster ophthalmicus (Fig. 2.14). 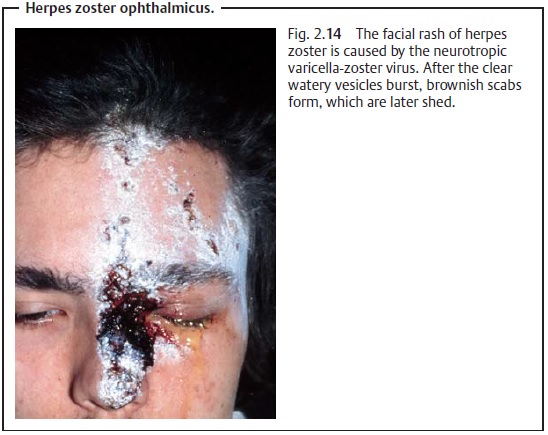 Symptoms: The incubation period is 7 – 18 days, after whichsevere painoccurs in the area supplied by the first branch of the trigeminal nerve (the ophthalmic nerve with its frontal, lacrimal, and nasociliary branches). Prodro-mal symptoms of erythema, swelling, photosensitivity, and lacrimation mayoccur before the characteristic clear watery vesicles appear. The vesicles burst and brownish scabs form, which are later shed. Blepharitis is also present in 50 – 70% of all cases. As herpes zoster usually affects immunocompromised persons, the patient should be examined for a possible underlying disorder.

The skin sensitivity at the tip of the nose should be evaluated on both sides in the initial stage of the disorder. Decreased sensitivity to touch suggests involvement of the nasociliary branch of the ophthalmic nerve, which can lead to severe intraocular inflammation.

Complications: Involvement of the nasociliary branch of the ophthalmicnerve can lead to severe intraocular inflammation.

Etiology: An abscess of the upper or lower eyelid can form as a sequela ofminor trauma, insect sting, or spread of inflammation from the paranasal sinuses.

Symptoms: The severe inflammation and swelling often make it impossibleactively to open the eye (Fig. 2.15). The contents of the abscess can fluctuate during the clinical course of the disorder. Spontaneous perforation with pus drainage can occur. 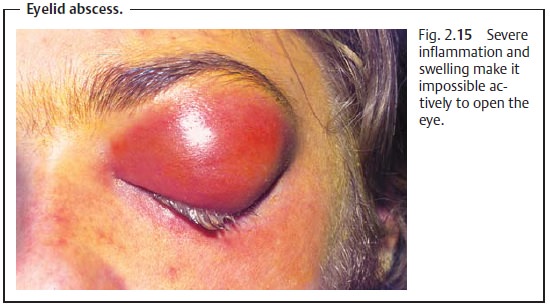 Treatment: Oral or intravenous antibiotics and dry heat are indicated. A stabincision can relieve tension at the onset of fluctuation.

Prognosis: The prognosis is generally good.

Orbital cellulitis or cavernous sinus thrombosis can occasionally occur as a sequela of eyelid abscess, especially when located at the medial angle of the eye. This represents a life-threatening complication.

Tick Infestation of the Eyelids

Ticks have been known to infest the eyelids. They are thought to be vectors of borreliosis and can cause encephalitis. Treatment consists of mechanical removal of the parasites.

Louse Infestation of the Eyelids

This refers to infestation of the margin of the eyelid with crab lice as a result of poor hygienic conditions. The small oval nits frequently hang from the eye-lashes (Fig. 2.16), causing inflammation of the margin of the eyelid with severe itching. Mechanical removal with forceps is a time consuming but effec-tive treatment. Application of a 2% mercury precipitate ointment over an extended period of time is also effective. 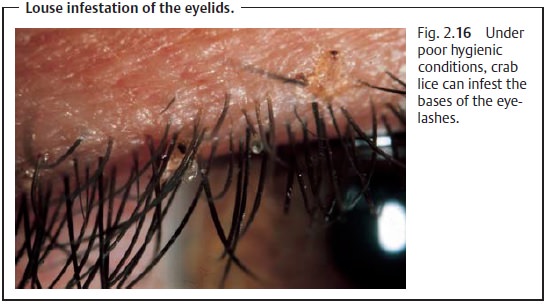