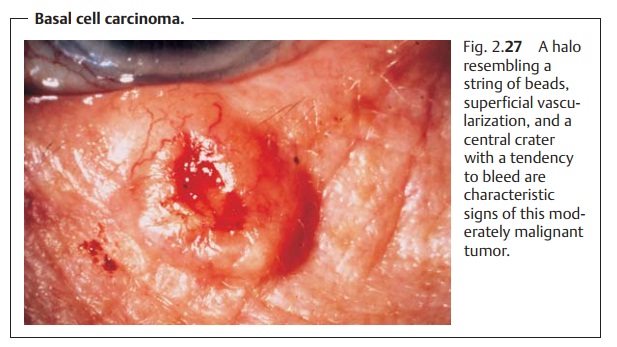 Approximately 90% of all malignant eyelid tumors are basalcell carcinomas. Their incidence increases with age. In approximately 60% of all cases they are localized on the lower eyelid. Morbidity in sunny countries is 110 cases per 100000 persons (in central Europe approximately 20 per 100000 persons). Dark-skinned people are affected significantly less often. Gender is not a predisposing factor.

Causes of basal cell carcinoma may include a genetic disposition.Increased exposure to the sun’s ultraviolet radiation, carcinogenic substances (such as arsenic), and chronic skin damage can also lead to an increased inci-dence. Basal cell carcinomas arise from the basal cell layers of the epidermis and the sebaceous gland hair follicles, where their growth locally destroys tissue.

Typical characteristics include a firm, slightly raised margin (ahalo resembling a string of beads) with a central crater and superficial vascular-ization with an increased tendency to bleed (Fig. 2.27). 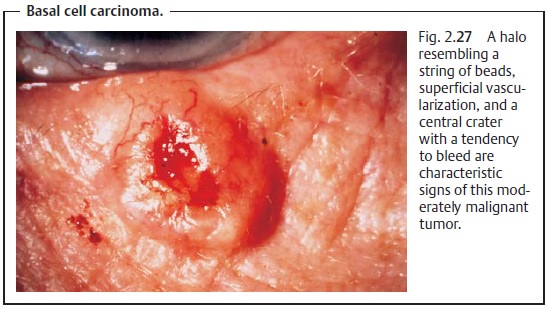 Ulceration with “gnawing” peripheral proliferation is occasionally referred to as an ulcus rodens; an ulcus terebans refers to deep infiltration with invasion of cartilage and bone.

The diagnosis can very often be made on thebasis of clinical evidence. A biopsy is indicated if there is any doubt.

Loss of the eyelashes in the vicinity of the tumor always suggests malig-nancy.

The lesion is treated by surgical excision within a margin ofhealthy tissue. This is the safest method. If a radical procedure is not feasible, the only remaining options are radiation therapy or cryotherapy with liquid nitrogen.

The changes of successful treatment by surgical excision are verygood. Frequent follow-up examinations are indicated.

The earlier a basal cell carcinoma is detected, the easier it is to remove.