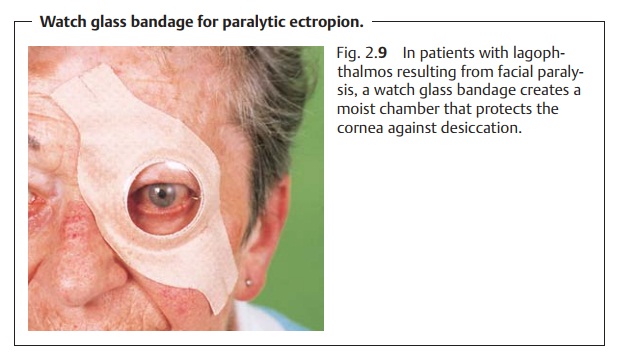 Ectropion refers to the condition in which the margin of the eyelid is turned away from the eyeball.

Ectropion refers to the condition in which the margin of the eyelid is turned away from the eyeball. This condition almost exclusively affects the lower eye-lid. The following forms are differentiated according to their origin (see also Etiology):

Senile ectropion is the most prevalent form; the paralytic andcicatricial forms occur less frequently. Congenital ectropion is very rare and is usually associated with other developmental anomalies of the eyelid and face such as Franceschetti’s syndrome. 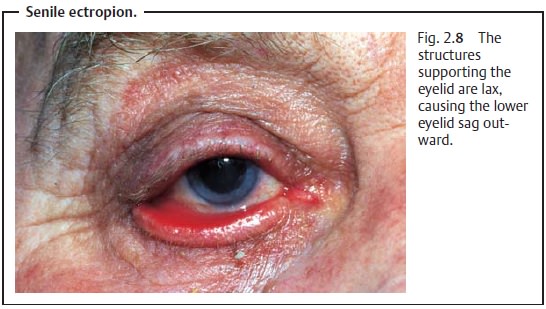 ❖ Paralytic ectropion: This is caused by facial paralysis with resulting loss offunction of the orbicularis oculi muscle that closes the eyelid.

❖ Cicatricial ectropion: Like cicatricial entropion, this form is usually asequela of infection or injury.

Left untreated, incomplete clo-sure of the eyelids can lead to symptoms associated with desiccation of the cornea including ulceration from lagophthalmos. At the same time, the ever-sion of the punctum causes tears to flow down across the cheek instead of draining into the nose. Wiping away the tears increases the ectropion. This results in chronic conjunctivitis and blepharitis.

❖Senile ectropion: Surgery is indicated. A proven procedure is to tighten thelower eyelid via a tarsal wedge resection followed by horizontal tightening of the skin.

❖ Paralytic ectropion: Depending on the severity of the disorder, artificialtear solutions, eyeglasses with an anatomic lateral protective feature, or a “watch glass” bandage (Fig. 2.9) may be sufficient to prevent desiccation of the cornea. In severe or irreversible cases, the lagophthalmos is treated surgically via a lateral tarsorrhaphy. 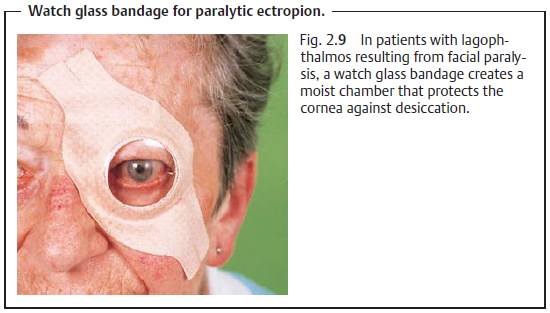 The prognosis is favorable when the disorder is treated promptly.Sometimes several operations will be required. Surgery is more difficult where scarring is present.